Security efforts for Wednesday's event are heightened after the violent Jan. 6 insurrection at the U.S. Capitol. 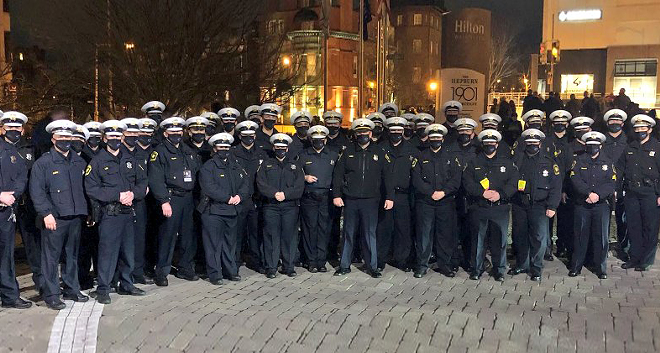 A contingent of 40 Cincinnati police officers has arrived in Washington, D.C. to assist with Inauguration Day security as the nation continues to grapple with the aftermath of this month’s insurrection at the U.S. Capitol.

Officers from the Cincinnati Police Department — including a captain and a lieutenant — will join federal law enforcement groups in security efforts as President-Elect Joe Biden and Vice President-Elect Kamala Harris take their oaths of office on Wednesday.

The officers departed Cincinnati on Monday and largely traveled together via charter bus to Washington, where they were sworn in as temporary Deputy U.S. Marshals within the Department of Justice and received their assignments. They’ll return to Cincinnati on Thursday.

Lt. Steve Saunders, public information officer for CPD, says officers from across the nation routinely are invited to aid Inauguration Day security efforts, but federal agencies need even more help this year because of heightened security concerns after the Jan. 6 riot that resulted in five dead and dozens arrested, including Ohioans. He says that CPD officers likely will be placed as site security for extra visibility.

“We want every event to go smoothly and without any incidents at all, but we know that sometimes big events like this can draw people with differing opinions. We respect everybody’s right to peacefully protest,” Saunders says. “But I think from a security standpoint, having those additional officers on the ground there and being part of that overall security mission should give people comfort that this event will be very peaceful and very well protected. That’s what we’re hoping for and what we’d like to see happen.”

Because the Cincinnati officers have been deputized for the event, they will have the authority to make arrests while on duty, Saunders says. Their U.S. Marshal status ends once their duties in Washington are complete.

Cincinnati officers volunteered for Inauguration Day duty and were vetted within the department before receiving approval. Their transportation, accommodations, meals and necessities related to the event are funded by federal grants.

“Tomorrow [Inauguration Day] is going to be a long, long day,” Saunders says. “They’ll probably get on their post around 4 a.m. and will be out in the elements — probably a 12- to 14-hour day on their feet,” Saunders says.

Saunders, who participated in Inauguration Day security in 2016, says that this is an opportunity for officers to represent the city of Cincinnati while trying to ensure a peaceful transfer of power from one administration to another. He says that CPD officers are aware of the extra risks they may be taking.

“I’m sure that’s on their mind a little bit, but nobody expressed fear or concern for their safety to the level where they didn’t want to go or didn’t want to participate in this experience. They’re all very highly trained,” Saunders says. “I hope it goes peacefully. I really do. I’m praying for the officers’ safety and the safety of everyone out there.”