This week, get an inside look at J.D. Vance, cry over a Cincy institution being demolished and grumble over what we all knew would happen to the Reds. 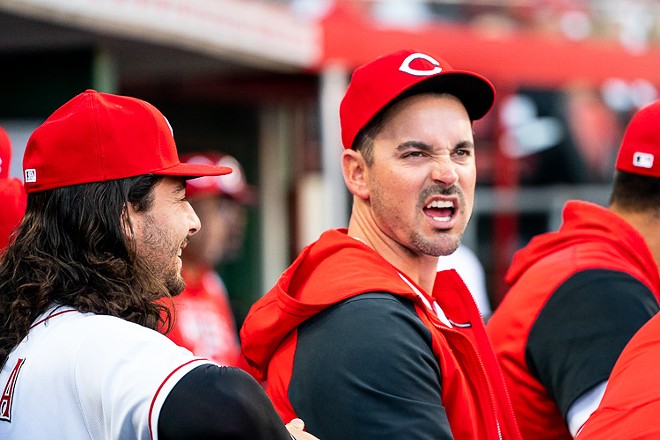 This week, two Cincinnati institutions were killed off, though both could serve the city in new ways. In other news, locals have opinions on everything from politicians to disappointing sports teams, regional leaders are looking into cyclist safety and county officials desperately need workers for the upcoming election. If you're hungry, CityBeat's latest print edition focuses on affordable eats (all under $13!), plus Cincinnati Taco Week is right around the corner with $2 tacos.

Catch up on the latest headlines below.

Homecoming Elegy: What the People of Middletown Really Think of J.D. Vance
Summing up what the people of Middletown think of J.D. Vance is complicated. The author, venture capitalist and U.S. Senate candidate has built a platform and fortune on his experience growing up in Middletown just outside of Cincinnati, but both fans and opponents differ on how he reflects upon the small city. Read CityBeat's story to hear what "Middies" think about the controversial Vance.

Cincinnati Reds Suffer Second-Ever 100-Loss Season with Shellacking by the Chicago Cubs
The Cincinnati Reds' wretched 2022 season finally is over, and the way it went out was not pretty. During the season's final game at Great American Ball Park on Oct. 5, the Chicago Cubs thumped the Reds 15-2. The loss put the Reds season record at 62-100 – just the second time in franchise history that the team racked up 100 losses (the last time was in 1982). See CityBeat's photos from the Reds' season finale and learn about the other terrible records the team set this year.

Cincinnati's Bunbury Music Festival Will Not Be Returning
It’s the end of an era for the Bunbury Music Festival. “Bunbury will not be returning in the way that fans have grown to know and love it,” PromoWest Productions says. The event is shifting from its three-day festival model into a series of “Bunbury-themed shows and events for the near future,” per a press release. Read CityBeat's story about fan reaction to the Bunbury announcement.

Concrete Barriers, Dedicated Bike Lanes Likely Coming to Girl Scout Bridge
It’s been more than a month since a driver struck and killed Gloria San Miguel on the Girl Scout Bridge connecting Newport and Covington, sparking a push to quickly install protective barriers for cyclists on the bridge. After discussion about different types of solutions, officials seem to have settled on Jersey blocks, but inflation could send installation costs sky-high. Read CityBeat's story about the project's next steps and timeline.

Clifton's Mad Frog Demolished, Making Way for New Apartment Development
Clifton's Mad Frog is no more. The decades-old, green-hued music venue and bar at 1 E. McMillan St. has been demolished after closing in July. Owner Aydin Kol had purchased the property in 1996 and ran it for 26 years. Read CityBeat's story about the residences that will be built upon Mad Frog's former land.

Pickup Truck Smashes into Alabama Fish Bar in Over-the-Rhine
Alabama Fish Bar can't catch a break. Just months after the restaurant completed renovations and reopened to the public, a black pickup truck careened into the establishment's entrance. Police say the driver allegedly was intoxicated, and the truck's front fender and driver-side wheel well were completely smashed in. Read CityBeat's story about the incident.

Get Paid to Work the Polls in Hamilton County on Election Day in November
The Hamilton County Board of Elections says it still needs hundreds of poll workers to helm election-day operations on Tuesday, Nov. 8. A large part of the shortage comes as aging poll workers are staying inside to protect themselves from the continued threat of COVID-19, plus threats against poll workers have increased in the wake of election fraud misinformation during the 2020 election. Read CityBeat's story about how much you'll get paid as a poll worker.

Cincinnati Metro has unveiled four possible options for new bus rapid transit corridors that the agency says will allow riders to travel faster than ever and add to neighborhoods' economic development. Now the agency needs riders' help in prioritizing the routes that will happen first. Read CityBeat's story to see Metro's schedule of public feedback sessions in October about BRT.

New Bronze Statue Celebrates West End Boxing Legend Ezzard Charles
City officials unveiled a statue of World Heavyweight Champion boxer Ezzard Charles in a park that also now sports his name. Charles, who grew up in Cincinnati, was known in the boxing world as the "Cincinnati Cobra" and was inaugurated into the International Boxing Hall of Fame. Read CityBeat's story about the latest celebration of Charles' achievements.

Joey Votto Drops More Sweet Nuggets During Cincinnati Reds' Penultimate Game
Since undergoing surgery on his rotator cuff Aug. 19, Cincinnati Reds first baseman Joey Votto has been having fun with his appearances at Great American Ball Park, most notably with John Sadak, Barry Larkin and Jim Day. The Reds first baseman routinely shares game insights with the broadcasters that make it clear he could have a new career once his playing days are over. But it's Votto's quips that keep viewers coming back for more. Read CityBeat's story to hear Votto's Batman impression that made the broadcasters laugh so hard.