The Zoo made the announcement on what would have been Oliver Nicholson's second birthday. 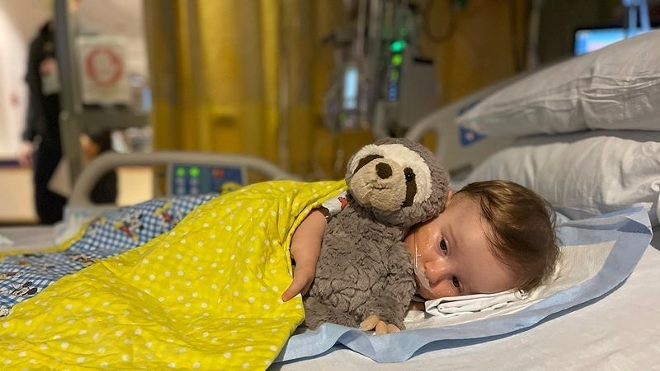 A young sloth enthusiast would have been two years old today. In his memory, the Cincinnati Zoo’s sloth habitat will be renamed after him.

Oliver Nicholson was born 2 pounds, 14 ounces, alongside his twin brother Atticus, on Oct. 11, 2019, according to a Change.org petition set up by Oliver’s family. They say he had one hand and three total fingers as well as, “pig bronchus, long gap TEF (born unable to swallow), right aortic arch heart, one kidney, narrow airways and a few other minor issues.”

Family members say that after coming home, Oliver began catching up to his twin and even learned to say “Hi dada and mama,” despite his vocal cords being paralyzed.

Oliver’s esophagus and stomach were successfully attached in January. His family says that during the recovery, Oliver received a stuffed sloth, which “he adored and he would sleep with him every night.” The sloth and his accompanying "hang in there" balloon became very popular with hospital staff throughout Oliver’s four-week stay. On Feb. 17, after complications during a procedure to check his esophagus, Oliver passed away.

Oliver's family says on a Change.org petition that during the boy’s visitation, people excitedly informed them that the Cincinnati Zoo’s sloth was pregnant, adding that the gestation was a sign. They suggested that the sloth should be named Oliver, since the pup would arrive with two-toes, similar to Oliver’s one hand with two fingers. While the family says they still have Oliver's favorite stuffed sloth, they note that he was buried with a “lovely sloth” and his “hang in there” balloon above him. The family then started their petition to name the future zoo baby Oliver in the boy’s honor.

Tragically, the Cincinnati Zoo’s anticipated sloth pup was stillborn on Oct., 10, the Zoo says in a press release, adding that the vets and care staff were devastated after an hours-long labor. The baby would have been mama Lightning's first, and caretakers say her pregnancy was going well leading up to the birth.

“This was an incredibly tough day for our Zoo team and our Zoo community, and I’m saddened for our zookeepers that have given so much to Lightning during her pregnancy,” says Meredith Hughes, Cincinnati Zoo’s curator of ambassador animals and outreach. “Even in this tough time, this team has shown incredible resiliency and exceptional dedication to the animals in their care. While this result was not what we had hoped, their focus has shifted to making sure that Lightning remains healthy and comfortable in the weeks ahead.”

Oliver’s family writes in a statement that they are heartbroken to hear the news about the pup and have had discussions with the zoo staff, who told them they don’t name the zoo babies until after they are born out of an abundance of caution. “Let’s hope Lightning and her caretakers are doing ok and recover from this tragedy. Please keep the zoo staff in your thoughts as they are dealing with such a terrible and sudden loss,” the family writes.

In his memory, the Cincinnati Zoo & Botanical Garden announced on what would have been Oliver's second birthday its sloth habitat will be renamed “The Oliver Nicholson Memorial Sloth Habitat.”