Cincinnati's Big Labor Movement, and 8 Other Greater Cincinnati News Stories You May Have Missed This Week

Workers' rights, abortion, weed and the Bengals – what more could Cincinnatians care about? 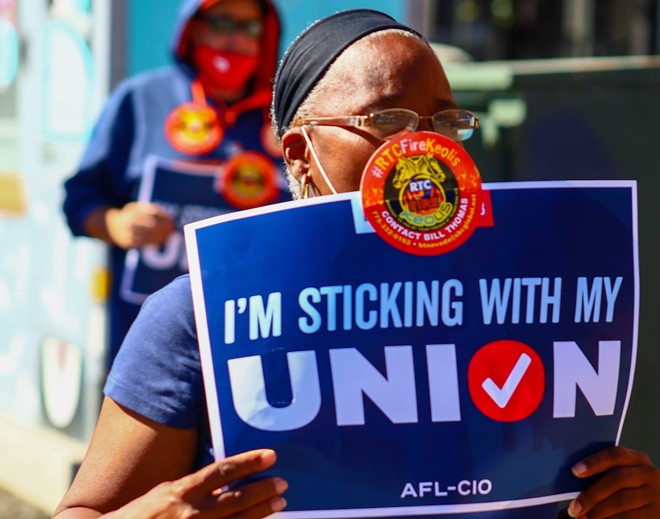 The Cincinnati Bengals' division game – plus Sam Hubbard's recent fumble-return heroics – seems to be at the top of Cincinnatians' minds these days, but big labor union movements, abortion law changes and weed access also are causing ripples throughout the region. Catch up on the week's big headlines below.

The employees of Cincinnati’s Contemporary Arts Center (CAC) announced they are unionizing. On Jan. 17, one employee told CityBeat that CAC employees are seeking to unionize for increased wages, and they hope an impending change in museum leadership will help push their cause forward. The CAC announcement comes as employees for outdoor retailer REI in Cleveland announced their plan to unionize. Read CityBeat's story for what CAC's management had to say about the budding union.

Cincinnati Bengals to Return to Division Cage Match Jan. 22
Will the Bengals continue to reclaim last season's playoff magic? The team – and every fan – sure hopes so. The Bengals will takes on the Buffalo Bills in the AFC divisional round, meeting for the first time since Bills safety Damar Hamlin collapsed with a cardiac arrest during the Jan. 2 game. The match-up comes on the heels of homegrown defensive end Sam Hubbard's amazing 98-yard score on a fumble return against the Baltimore Ravens in the AFC Wild Card round. Meanwhile, local governments and businesses are celebrating the team with special meals and even a city name change as former Bengals wide receiver Chad "Ocho" Johnson leaves more $1,000 restaurant tips around the region. Read CityBeat's story about the Bengals' odds for continuing another big Super Bowl run.

Here’s Where Abortion Currently Stands in Ohio, Kentucky and Indiana

Federal policy changes, lawsuits from pro-choice advocates and freshly-elected judges make for a kaleidoscopic view of abortion care access in the Tri-State. In Ohio, the city of Lebanon walked back a major portion of their anti-abortion ordinance. Across the state, fertility doctors and patients worry that Republican legislation could prevent many Ohioans from becoming pregnant. In Indiana, the state's Supreme Court is trying to decide whether to hear a case that could impact abortion care access. And in Kentucky, new Supreme Court members could lift the near all-out ban on abortion in the state. Read CityBeat's story about pro-choice advocates' longterm plan to restore abortion access in the buckeye state.

Ohio Votes Having Big Problems Under State's New Voter ID Laws
A new package of anti-voter bills recently signed into law by Republican Gov. Mike DeWine already is make it even more difficult to cast a ballot. Groups against the laws that require photo identification at the polls disenfranchise people who are lower-income, don't have stable housing or are members of the LGBTQ+ community, particularly transgender folks. Likewise, Ohio veterans also are expected to have trouble voting, as the new laws now exclude veteran-specific IDs. Read CityBeat's story about more problems voters face.

Cincinnati Metro has announced which two corridors will be the first in the region to get Bus Rapid Transit (BRT) routes. The Hamilton Avenue and Reading Road corridors were chosen after Metro conducted months of community engagement and analysis.
Metro says construction on the two corridors is scheduled to begin sometime in 2025.
BRT is more like a train than a bus because of how infrequently it stops, and because it has its own dedicated bus lane. Read CityBeat's story to find out which neighborhoods will benefit the most from the new speedy service.

That lack of regulation around medical marijuana — along with the legal no man’s land that medical marijuana occupies in Kentucky today — has left doctors and health care systems in the Commonwealth to craft a patchwork of policies in response to a recent executive order from Governor Andy Beshear. Patients must now obtain a “written certification” from a physician documenting that they have one of the 21 qualifying conditions to get medical marijuana. Read CityBeat's story about what physicians are doing (and not doing) in response to the executive order.

FC Cincinnati's Brandon Vazquez, Roman Celentano Get Tapped for USMNT's January Camp
Members of Cincinnati's MLS team are heading to camp. A big, big camp. Forward Brandon Vazquez and goalkeeper Roman Celentano have been called up to the U.S. Men's National Team's January training camp. They're among 24 players who will head to Los Angeles to kick off the 2026 FIFA World Cup cycle. Players from the camp – typically filled with rising talents – often are called upon to join a World Cup roster later. Read CityBeat's story about why Vazquez's and Celentano's call-ups are big milestones for the club.

Cincinnati Once Again Ranks on MovieMaker Magazine's List of Best Places to Live and Work in the Film Industry
Cincinnati is continuing its transformation into a Midwest Hollywood. The Queen City has become an annual fixture on MovieMaker magazine’s “Best Places to Live and Work as a Moviemaker” list, thanks in large part to Ohio's refundable tax credit, Cincinnati's Over-the-Rhine Film Festival and University of Cincinnati's film program. Read CityBeat's story to find out where Cincinnati landed on the magazine's list.