Cincinnati is Watching for UFOs, and 8 Other Greater Cincinnati Stories You May Have Missed This Week

Catch up on COVID-19 vaccination news, what CityBeat thought of LaRosa's new vegan pizzas and an organization searching the skies for the truth. 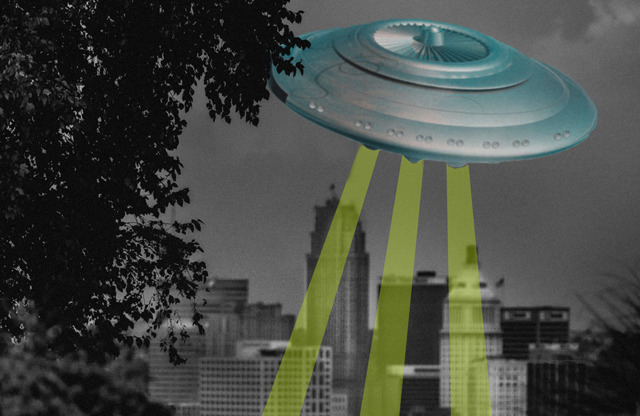 Photo illustration: Hailey Bollinger
MUFON is trying to see if the truth is out there — from Cincinnati.

Cincinnati is in the thick of Oktoberfest season now, and every single one of us has earned those pints and strudels. But before you head out for your next pretzel, catch up on COVID-19 vaccination news, what CityBeat thought of LaRosa's new vegan pizzas and an organization searching the skies for the truth.

City and county officials announced Tuesday that Cincinnati has secured funds to replace the Western Hills Viaduct. The bridge, which connects South Fairmont to CUF and the I-75 corridor, was built in the 1930s and has been deteriorating severely over the years. The new viaduct will be built alongside the current one, which will remain open during construction. Read CityBeat's story about when the new viaduct will debut.

The Cincinnati Public Schools Board of Education voted Monday to approve a new policy requiring all educators, support staff and in-district partners to be vaccinated from the coronavirus by fall. CPS is now the first major school district in Ohio to mandate COVID-19 vaccination. Read CityBeat's story about how the COVID-19 vaccination policy will be implemented.

In Most Ohio Counties, Fewer Than 1 in 2 Are Vaccinated Against COVID-19

The low vaccination coverage indicates that vast swaths of the state remain vulnerable to a surging, hyper-transmissible variant of the virus that causes the disease. Moreover, state health data coupled with 2020 electoral results reveals that the higher the rate of residents who voted for President Donald Trump, the less vaccinated the county. Read CityBeat's story about how low vaccination rates are overwhelming Ohio's hospitals with COVID-19 patients.

The 52-year-old nonprofit Mutual UFO Network (MUFON) boasts the largest civilian database of UFO sightings and deploys certified researchers to investigate new occurrences across the globe. So what's it doing in Cincinnati? Read CityBeat's story about MUFON's headquarters near Lunken Airport and the cases the organization investigates.

The Cincinnati Cyclones recently shared its jam-packed promotional schedule. And while CityBeat loves bobblehead giveaways and character appearances as much as anybody, there's one thing that really makes our heart thump about hockey season — dollar beers. And the upcoming 'Clones season will have plenty of them. Read CityBeat's story to learn when you can get your beer for a buck.

In Big Freedia’s sonic universe, anything less than over-the-top just simply isn’t on brand. For example, the artist is featured on this year's Space Jam: A New Legacy soundtrack with an endearingly ridiculous song that name-drops the majority of the Looney Tunes cast. Read CityBeat's case for why you should check out Big Freedia at Bogart's.

Created by Great Parks of Hamilton County and La Mega Media, the inaugural Hispanic Heritage Festival will honor the history, culture and achievements of Hispanic and Latin Americans through food, music and support. Read CityBeat's story about what to do and eat at the festival.