As reports of tent cities rise, more municipalities are implementing policies like Cincinnati's that can effectively criminalize being without a home Standing near a large window that looks out on Pendleton and Over-the-Rhine from long-time advocacy hub the Peaslee Center, Patrick Chin talks with attendees at a just-finished news conference — his first ever, he says.

He has a freshly-buzzed head, crisp fleece sweatshirt and detailed explanations about subjects like the excellence of Starbucks’ filtered water. But he’s here mainly to talk about experiencing homelessness.

Chin may become a plaintiff in a lawsuit against the City of Cincinnati and Hamilton County over his treatment this summer, when he lived under a bridge downtown near Third Street.

Attorneys representing another inhabitant at that camp, Joe Phillips, filed the original lawsuit in federal district court this summer alleging that a restraining order issued by a county judge effectively makes it illegal to be homeless.

The Greater Cincinnati Homeless Coalition Nov. 19 filed amendments to the original lawsuit seeking to block the city and county “from detaining or arresting citizens experiencing homelessness, and from seizing or destroying their property,” and to block an injunction that effectively made sleeping outside illegal in Hamilton County.

It’s not a struggle isolated to Cincinnati: places as disparate as Akron, Ohio, Boise, Idaho and San Francisco have also wrestled with similar moves by municipalities. The ongoing litigation — in Cincinnati and elsewhere — could have big implications for the ways in which people who do not have access to housing are treated.

The debate over how to address tent cities comes as the number of encampments seems to be growing. The National Law Center on Homelessness & Poverty has tracked media coverage of tent cities involving people experiencing homelessness over the past decade. According to research the group issued last year, there were 19 reported encampments across the country in 2007. By 2016, the last year full data was available, that number had risen to 277.

"Cincinnati, like many cities in the U.S., is struggling with a dramatic growth in visible  homelessness," NLCHP Senior Attorney Eric Tars says. "We can all agree than no one wants to see homeless people forced to live on the streets... Unfortunately, Cincinnati is engaging in a worst, rather than best, practice by criminalizing those living in encampments for simply trying to survive, costing the city more than providing shelter or housing while giving homeless citizens arrest records, fines, and fees that will only make it more difficult for them to exit homelessness."

Cincinnati officials’ efforts to remove a tent city under Fort Washington Way in July escalated into a drawn-out game of cat and mouse between city and Hamilton County officials and residents of various camps that popped up in Pendleton and Over-the-Rhine. 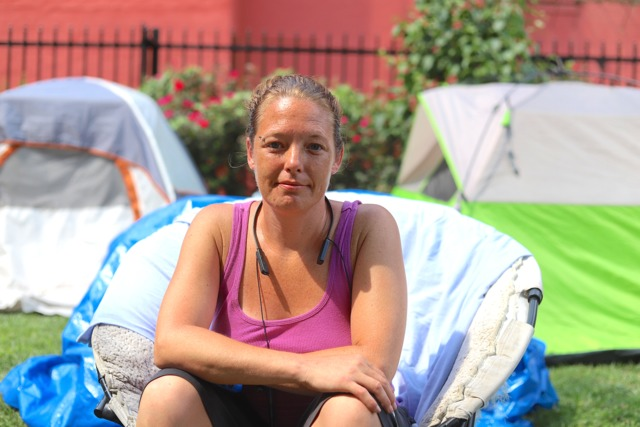 Caught up in the shuffle were camp residents like Jessica Barnett, who had to pack up and move several times over the summer. She was among the last to leave the earliest camp under Fort Washington Way  for another on Third Street. The city removed both, plus another camp Barnett moved to on Gilbert.

As she sat in the Pendleton camp, Barnett wore a perpetual tan. Her shoes were worn, but her clothes were neat, for  her hair pulled back tightly from her face.

“Where am I going to go?” she asked before motioning to the empty tent next to hers in the Pendleton camp inhabited by a man named Dave, who woke early that day to go to work. “Where am I going to take his stuff? He’s going to come home from work and all of his stuff is going to be gone. I’m out here by myself and, as a female, that’s never easy. He helps me out.”

Finding stasis has been hard for the 36-year-old since she lost housing she was staying in via a Talbert House program a few years back. Since then, she's been to jail for misdemeanor drug possession. She's had all of her belongings — including her ID, her birth certificate and her social security card — stolen on the street. The lack of those documents made it hard to find a job, she says.

Eventually she'd like to find housing stable enough to welcome back her two daughters, who currently live in Florida. In the meantime, she's struggling, she says.After the OTR camp disbanded, officers issued Barnett a ticket for sleeping outside downtown.

That sparked the filing challenging Ruehlman’s order from Phillips, another camp resident.

Officials representing the city and Hamilton County argue that tent cities like the ones that sprang up this summer present a public health hazard, and that they attract drug use and violent crime. Officials also argue that because there was room in shelters for those living in the camps, using threat of arrest to clear the tent cities is acceptable and legal.

Advocates, however, have pushed back at that claim and tie the prevalence of the camps to lack of access to affordable housing, mental health treatment, good-paying jobs and other necessities. They have also challenged the assertions that there is enough capacity in shelters for everyone experiencing homelessness, presenting data in their latest court filing they say contradicts that claim. Chin has a college degree. He has held down jobs and housing. But he also lost housing when his father evicted him, and has had trouble affording it since.

“Everyone has different reasons for being homeless,” he says. “According to society, I have mental health conditions. People can say all day long, ‘get a job, do this, do that,’ I’ve done all those things. We need to stop fixating on generalizations.”

According to attorney Bennett Allen, who is representing the plaintiffs in the lawsuit against the city and county, the fight isn’t about keeping tent cities.

“We’re not here because we want them to sleep outside or in places not fit for human habitation,” he said at the Nov. 20 news conference about the filing. “We’re here because they have no place else to go. We’re here because each year our city sacrifices affordable housing in favor of luxury development. More citizens are experiencing homelessness now than ever before.”

The final tent city here was located on private land owned by nonprofit Over-the-Rhine Community Housing. Inhabitants there cleared the camp in August under threat of arrest.

In Akron, a similar situation unfolded this summer when city officials told property owner Sage Lewis that he must disband his Homeless Charity Village, home to about 50 people otherwise experiencing homelessness. The camp existed on his property for a year and a half. In September, Akron City Council voted to order Lewis to vacate the camp by Thanksgiving, something he said he didn’t believe was possible. He filed a lawsuit to challenge the city’s right to order him to clear his land. The standoff between Lewis and the city drew national media coverage.

The threats of arrest for camp inhabitants in Cincinnati sparked some debate about whether officials here were overstepping their bounds. But the county argued that’s not the case.

"Because the encampment moved onto private property, a premises which is completely lacking the public health and safety requirements that are required by Ohio law, this court's injunctive powers to prevent the nuisance cause by the encampments are still applicable," the city and county's request for Ruehlman's injunction reads.

Some residents of the Cincinnati camps found housing, but many remain homeless. In the weeks after the camp was cleared, some residents who were unable to find housing received citations from police for sleeping outside.

Considering a case challenging similar moves in Boise, Idaho in September, the Ninth U.S. Circuit Court of Appeals out of San Francisco ruled that laws that punish sleeping outside are unconstitutional, citing the Eighth Amendment’s prohibition on cruel and unusual punishment.

That ruling, which Boise officials have appealed, is only binding in nine western states, however. And it includes a provision very pertinent to Cincinnati’s fight this summer. The court ruled that it’s only unconstitutional to penalize those sleeping outside when other options — such as shelters — aren’t available.

Advocates like the Homeless Coalition say shelter capacity shouldn’t matter. But they also take issue with the assertion that there is enough shelter space in the region, and in the latest court filing, the group shares data from the Department of Housing and Urban Development about calls to a Hamilton County hotline for emergency shelter access.

The filing presents similar data show individuals and families turned away from shelters due to lack of space for a number of other recent months.

Advocates have also extended the debate beyond criminalizing homelessness, pointing to the region’s housing gap as a root cause of the problem.

The amended filing also notes that Hamilton County needs tens of thousands of units of affordable housing to meet demand from those making under $14,000 a year, according to a study by the Greater Cincinnati Local Initiatives Support Corporation.

Tars, the National Law Center on Homelessness & Poverty attorney, worked on the case out of Boise. He says the aim of that lawsuit was to try to get cities to think bigger and find real solutions for people without homes.

"Rather than wasting further resources fighting in the courts to preserve these unconstitutional and ineffective approaches, cities like Cincinnati should look to our principles and best practices, create low-barrier shelter, day shelters, and permanent housing so that homeless persons do not have to be on the streets in the first place," he says. "This will be a win-win for businesses, housed and un-housed residents alike, and for the elected officials that actually solve the problem of homelessness, rather than just pushing it temporarily out of public view."