Starting Jan. 1, the county will take back operations of its animal shelter after commissioners rejected a bid to renew a contract with Clermont Animal CARE Humane Society, the animal welfare organization that has been managing the facility since 2018.

In what has become an emotionally charged story, for obvious reasons, the public — and a local humane society — have major concerns about the future of animal welfare in Clermont County.

Starting Jan. 1, the county will take back operations of its animal shelter after commissioners rejected a bid to renew a contract with Clermont Animal CARE Humane Society, the animal welfare organization that has been managing the facility since 2018.

That means Clermont Animal CARE has until Jan. 1 to clear the shelter of its remaining animals — currently 20 dogs; all cats have been adopted. The group will also be responsible for any animals that come to the shelter before Dec. 29. (See the adoptable doggos on their site.)

Clermont County Commissioner Ed Humphrey says all remaining dogs on Jan. 1 are "officially the property of Clermont Animal CARE. We will ask them to take them and failing that, keep them and try to adopt them out or get them to a rescue, humane society or foster home.”

Clermont County says they were unable to negotiate a contract Clermont Animal CARE — the sole bidder for the job — after the humane society asked for $848,726 to continue operations. That is more than double their current contract of $419,000.

“Clermont County countered with a $500,604 proposal for the first year (with 3% more in the second and third years), based on research of what neighboring counties pay for animal services and the fact that Clermont Animal CARE Humane Society was able to provide excellent services with contracts of $310,000, $310,000 and $419,000 in the three-year agreement that expires at the end of 2020,” says Mike Boehmer, Clermont County Communications Coordinator.

Boehmer says the humane society rejected that offer. And since no other agency besides Clermont Animal CARE submitted a bid and an agreement couldn’t be reached, operations go back to the county. 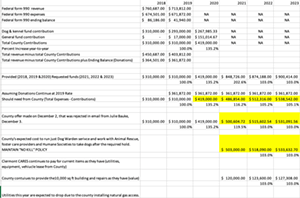 “We are currently in the budgeting process for 2021,” says Commissioner Humphrey. “As it stands, we will need to draw on our reserve balance by approximately $700,000. We simply can't add that much additional to our budget.”

But Meaghan Colville, director of lifesaving programs at Clermont Animal CARE, argues their request was fair.

“Clermont County offered us $500,000 for the contract. They did not produce a budget or how they came up with that number; unlike us, who produced a budget to justify our $844,000 budget (you can find it on our Facebook page),” she says via email. “It seems they want to pay what they want to pay, rather than what it actually costs. What's important to remember is that we are unlike any other vendor they work with; we are not trying to maximize profit but instead minimize loss.”

Colville also says the reason for the jump in pricing is that the shelter and its operations have been “historically, woefully underfunded.”

“If we were starting at a fairer rate, the jump to $844,000 wouldn't appear to be so high. Our budget has been posted online and the biggest increase has been to payroll. Currently, the majority of our staff makes minimum wage (starting at $9/hour) and no one receives benefits for providing this essential county service,” she says. “In our proposed 2021 budget, we have increased salaries to fair, livable wages (averaging what is still a low $16/hour) and added modest benefits for the first time in county history. We feel strongly that working in animal welfare is heartbreaking, backbreaking work and our people deserve to be able to make a living providing this county service.”

Starting in the new year, Clermont County will operate the shelter under Ohio Revised Code 955, a bare minimum which only requires them to keep, house and feed stray dogs for three days. Cats are not included and will not be housed/taken in at the shelter.

Per the ORC (which is mildly concerning and worth a read), any untagged dog left after three days can be “donated to any nonprofit special agency that is engaged in the training of any type of assistance dogs,” sold for $3 to “any nonprofit Ohio institution or organization that is certified by the director of health as being engaged in teaching or research concerning the prevention and treatment of diseases of human beings or animals,” sold in general or, failing those options, “be humanely destroyed.”

“The county has made clear they are only committed to what they are required by law. That is ORC 955 stray dogs,” says Clermont Animal CARE’s Colville. “This means that the county will not be providing services for owned pets that need to be rehomed or cats. At Clermont Animal CARE, we provide full-service animal sheltering. We have a robust cat program that in 2020 included a county-wide community cat spay/neuter program. We also have programming that helps people who have fallen on hard times keep their pets. All programming beyond stray dog pick up and housing for three days will go away when the county takes over.”

As for any stray dogs that come to the shelter within that three-day hold period of Jan. 1, Clermont Animal CARE responded to a viral post claiming any dogs left would be euthanized.

“We do not know what will happen to strays that come in after December 29 as they must be held for 72 hours and will be the county's responsibility when their stray hold expires. The county still has not provided a detailed plan for keeping the shelter no-kill or how they will handle any animals besides stray dogs,” the organization wrote on Facebook.

Commissioner Humphrey says, “Clermont County is committed to a clean and well-maintained animal shelter that maintains a low euthanasia rate. The county is not moving to a ‘kill shelter.’”

He also says they have “made tremendous progress since 2015, with the euthanasia rate dropping by 90%.”

Part of that progress has been directly overseen by Clermont Animal CARE.

Since they took over operations from the county in 2018, they’ve “increased dog intake by 32%, increased dog adoptions by 42%, reduced dog euthanasia by 41% and maintained a 98% Live Release Rate since day one,” they say.

They county did not provide a specific number or percentage of dogs they would find acceptable to euthanize under their “no kill” policy, but Commissioner Humphrey says, “We will only euthanize animals that are not medically viable or so vicious in nature that they cannot be retrained.”

It should be noted that even Clermont Animal CARE has had to euthanize animals. A transparent list of the dogs and cats taken in since 2018 and their outcomes is on their website. In 2020, 14 dogs were euthanized for medical or temperamental reasons or died in care as well as 50 cats — but that’s a 98.4% and 94.8% live release rate, respectively.

“Our top concerns are that the county claims to be committed to no-kill but they are cutting the budget in half and cutting staffing in half,” says Colville. “There is absolutely no way to keep no-kill with that budget and staffing model. Most concerning is that they do not plan to hire any veterinary staff, which is a huge aspect of not only no-kill services but basic, humane animal care. Our medical team at Clermont Animal CARE provides vaccines, exams and emergency care to animals in our care every day, especially stray dogs.”

County Communications Coordinator Boehmer says they will be partnering with outside agencies “to make sure dogs receive the care they need. We will also be seeking partnerships with other agencies where needed.” He says funding will be appropriated for animal care.

The county also says it aims to leave the care of cats up the three humane societies in Clermont County, which Humphrey listed as Clermont Humane Society, Clermont to the Rescue Humane Society and Clermont (Animal) CARE Humane Society. And hope to remand care of any dogs left after their three-day hold to adopters or “animal rescue organizations, individual foster folks and humane societies.”

“Partnering with humane societies isn't as easy as they make it seem,” says Colville. “The humane societies in Clermont County already run their operations and to ask them to take on the additional load of all county cats is a tall task; not impossible but not a slam dunk like the county might imply. We will not be able to help them because we will no longer exist. Clermont Animal CARE was formed to run the county shelter. We will not be in existence as a private humane society if we don't have the county contract. Clermont Animal CARE will dissolve on Jan. 1 if we aren't running the shelter.” Clermont County says they are currently hiring a dog warden and “assistants with experience running successful shelters.” They also note that “employees from Clermont Animal CARE Humane Society are welcome to apply.”

Commissioner Humphrey also says, “The Clermont County Sheriff deputies will investigate cruelty to animal cases. We will care for the seized, mistreated animals at the shelter until trial. Once the trial is completed we will attempt to find good homes for the animals.”

“We are obviously crushed by the decision of the commissioners to opt out of a humane society partnership that has brought elite, nationally-recognized no-kill animal sheltering to Clermont County,” said Carolyn Evans, Clermont Animal CARE’s Executive Director, in a release. “The shelter has been underfunded for decades and the county has no plan to provide the level of service seen since 2018.”

A previous version of this story said there were only three dogs left at the shelter. There are in fact 20 dogs left.