The plan council passed would make Liberty Street five lanes instead of seven, reclaiming about 20 feet of right-of-way. Mayor John Cranley supports an alternate plan that would add bump-outs to sections of the street. 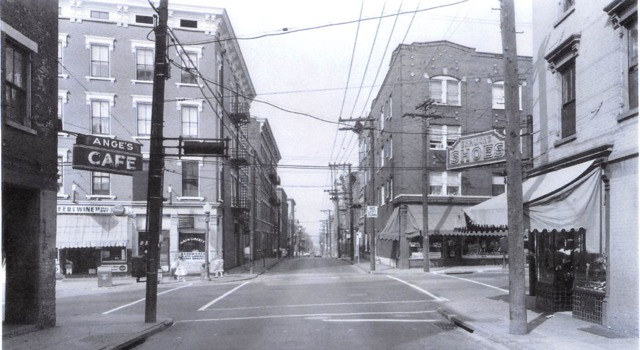 City of Cincinnati
Liberty Street in the 1950s

Council approved funding for the program back in October, but it hasn't been implemented by the city yet. Mayor John Cranley opposes the plan, instead supporting an alternative that preserves parking and doesn't involve relocation of a water main that could cost $800,000. The October ordinance pays for the water main relocation via money from an OTR tax increment financing district.

The original $3.4 million plan, drawn up after five years of public input and design sessions and supported by neighborhood groups, would reduce Liberty Street as it runs between north and south Over-the-Rhine from seven lanes to five lanes, reclaiming about 20 feet of land on the street’s south side that proponents say could be used for development. On-street parking in the remaining curb lanes would be restricted between 7 a.m. and 7 p.m. under that version of the plan.

"We passed this ordinance five months ago," council member Chris Seelbach said. "We need to start going forward. A super majority has allocated funding for this project, and now, a majority of council has directed the administration to go forward on this. I don't know what else we need to do. I think the path is very clear."

Cranley says that both Chatfield College — at the west end of Over-the-Rhine, and Pendleton Community Council, which is to the east of the neighborhood — say they haven't been engaged and don't support the plan over concerns about parking.

Chatfield President John Tafaro says that many of the school's students are low-income and need the on-street parking Liberty provides.

"They already are overcoming so many obstacles," he told council earlier this week.

But Seelbach says that he's willing to preserve parking on the street — reducing it to three lanes at various parts of the day — and points out that the road narrowing doesn't extend into the Pendleton portion of Liberty.

Liberty Street, which was expanded from a small street to a major thoroughfare connecting I-75 to other major routes in the 1960s, has long been the focus of pedestrian safety concerns. It is also seen as a division between booming southern OTR and the neighborhood’s less-developed northern half.

The alternate plan Cranley supports would keep the extra lane on either side of the road for parking but build bump-outs for pedestrian crossings at key intersections. Cranley says this version saves 85 parking spots, increases pedestrian safety and won’t create bottlenecks that he believes could happen if someone fails to move a car parked in the curb lane during the hours restricted under the original plan.

Cranley also says that the city doesn't have any plans for the "huge expanse" of reclaimed right-of-way, which supporters say the city could sell to recoup some costs. Cranley mentioned tent cities that popped up along Third Street downtown earlier this summer, implying that the new right-of-way on Liberty could see similar encampments.

The concerns over the project popped up recently. Until last summer, the original plan had the city’s green light and was funded for completion. However, Acting City Manager Patrick Duhaney suspended the project after he says the city learned about the need to move the water main under Liberty Street. The main has 85 years of useful life left, city administration says, and must be moved if the original road-calming plan is carried out so that it can be easily accessed for maintenance.

That revelation came around the same time FC Cincinnati began ramping up plans for construction of its Major League Soccer stadium in the nearby West End. That’s caused some — including council members pushing for the original road-calming plan — to charge that the project is being held up over concern that it would disrupt traffic flow to future FCC games.

A memo from Duhaney cited lack of study about how FCC traffic would be affected by the project. But Cranley has called charges that FCC had anything to do with the project’s delay and his veto “conspiracy theories,” saying that he believes city administration’s plan is better and cheaper.