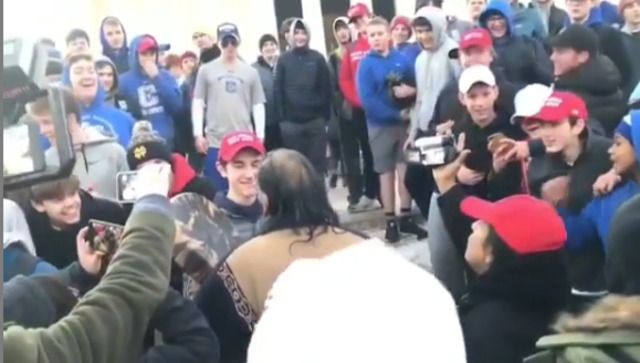 Photo: Autumn Rain/Instagram
Nicholas Sandmann at the march in Washington, D.C. in 2019

“We’re excited to have Nicholas on Team Mitch. Along with our already strong team, his efforts to bring people together all across Kentucky will be critical to Senator McConnell’s victory this November," said Team Mitch campaign manager Kevin Golden in a statement.

Sandmann will be acting as the campaign's grassroots director, assisting with coalitions and field operations, according to Press Secretary Kate Cooksey.

Sandmann, a paid Team Mitch employee, will continue with his college education this fall, where he is Comms Director for the Transylvania University College Republicans, according to his Twitter bio.

Sandmann also recently spoke at the Republic National Convention, along with elected officials and candidates as well as other guests like Patricia and Mark McCloskey, a St. Louis couple who pointed guns at Black Lives Matter protesters who marched through their gated community earlier this year. The McCloskeys have said they were simply protecting their home, while detractors have claimed they may have broken the law by brandishing the handgun and AR-15-style rifle at the marchers.

I can’t tell you all enough about how excited I am to be apart of this years RNC! https://t.co/lur4zw1YS8

Sandmann rose to notoriety after a video of a school trip to Washington, D.C. in 2019 went viral. Students from Covington Catholic were in the nation's capital for a pro-life march when videos captured Sandmann and other students from the private Northern Kentucky Catholic school for boys in a face-off with Native Americans who were participating in an Indigenous Peoples March.

Those videos, which featured some students whooping and doing the tomahawk chop, went viral, initially drawing ire toward Sandmann — who was shown wearing a red "Make America Great Again" hat, standing across from indigenous marcher Nathan Phillips as the latter beat a small drum — and the other students for harassing the indigenous marchers.

Sandmann's attorneys filed defamation lawsuits against a number of media outlets that reported the story, including The Washington Post and CNN. Some of those outlets have since settled the suits for undisclosed amounts.