The COVID variants spread faster and cause people to get sicker, says Bruce Vanderhoff, chief medical officer at the Ohio Department of Health. 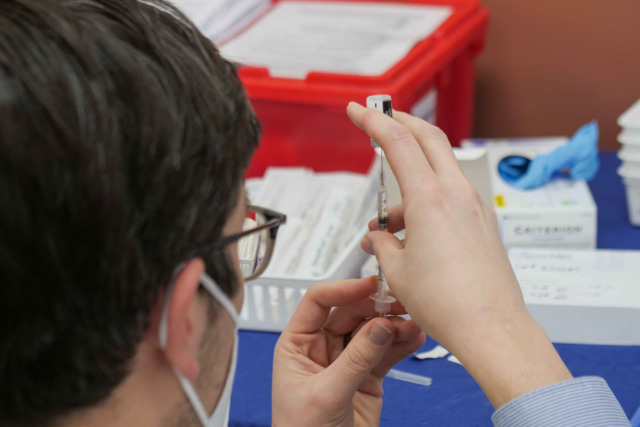 Variants of the coronavirus continue to be a concern in Ohio as COVID-19 cases and hospitalizations again rise — and these variants are more deadly than the original virus, experts say.

During an April 8 briefing with Ohio Gov. Mike DeWine, Ohio Department of Health chief medical officer Bruce Vanderhoff said that the B117 variant that originated in the United Kingdom — the variant that largely has caused a recent surge in Michigan and Northern Ohio COVID-19 cases — is outpacing the original coronavirus and soon will become dominant.

“Quite frankly, I think within the next couple of weeks, the variant will be the virus that we’re dealing with. If you look nationally, about a third of the virus that’s out there is believed to be B117 or its cousins,” Vanderhoff said.

As we’ve seen, the coronavirus causes a variety of both short-term and long-term health issues in patients, with many people experiencing difficulty breathing, fever, loss of taste or smell, muscle weakness, dizziness, delirium and strokes.

But the variants are even worse, Vanderhoff said. Moreover, B117 and other variants are much more contagious than the original virus is.

“The medical and scientific professions have been learning more and more about these variants over time, and originally we were not really sure that they in fact were more deadly or that they caused more severe disease. We sure knew that they spread a lot faster.” Vanderhoff said. “As we’ve learned more about them, it’s increasingly clear they spread really fast and they cause people to get sicker.”

Vanderhoff said that B117 and California variants B1427 and B1429 account for more than 95% of variant detections in Ohio.

“Just to give an idea of how quickly B117 and the variants are spreading, our variant counts jumped from 92 back on March 12 up to 797 today. That’s a doubling time of about every nine to 10 days, which is very similar to what they saw this winter in the United Kingdom,” Vanderhoff said.

“As we progress into April, it’s clear that Ohio and the nation are enduring yet another wave of COVID-19, but this time it’s being driven by the new variants of the original virus. We’re seeing this in the numbers,” he added. “Our two-week average of cases per hundred-thousand are up over 180. Our testing positivity rate is back above 4%. Our concurrent hospitalization number at 1,193, which is, by the way, close to where we were all the way back at the beginning of March.”

As of April 7 figures on Ohio’s coronavirus dashboard, Ohio has had a total of 1,033,606 confirmed and probable COVID-19 cases, 53,841 hospitalizations and 7,506 intensive care unit admissions.

“We continue to see a significantly higher number in cases,” DeWine said during the briefing.

More than half of Ohio’s counties — 53 of them — have seen a significant increase in cases, as shown on Ohio’s Public Health Advisory System map.

“While we’re going in the wrong direction, and we’re certainly going away from our goal of 50 (cases per 100,000), we’re not seeing the runaway case growth that we saw during the fall — certainly not yet. So we can still turn this around if more people continue to get vaccinated. This is a race. We are in a race. It’s a life and death race," DeWine said.

“Here in Ohio, we have consistently addressed these COVID challenges. As the governor outlined, we’ve got two really powerful forces working at our advantage. One is we’re doing a very good job getting vaccine into arms,” Vanderhoff said. “And the second is the very high retail compliance with masking that we see in this state. 94.5% (retail mask compliance), you know, that’s remarkable and not, per my conversations with counterparts in other states, universally seen when you go to other states.”

One third of all Ohioans have received at least one dose of vaccine, and DeWine is working with state and local health leaders to increase vaccination efforts. CityBeat reported that earlier this week, Hamilton County announced its goal of vaccinating 80% of the county’s population by July 4.

Vanderhoff said that the current vaccines from Pfizer, Moderna and Johnson & Johnson have shown good resilience against coronavirus variants, with Pfizer showing six months of immunity.

“It also holds up very well in the face of the variants, including B1351, which is one of the variants that many scientists had the greatest anxiety regarding,” Vanderhoff said. “On the other hand, even before the variants arrived, we knew that natural immunity — the immunity we get from exposure to the virus — is variable. Some people develop a robust immunity and many other people, not so robust. And, in fact, it can wane over time, and we have cases of people being reinfected who only had immunity from natural exposure.”

“This virus is not standing still. We need the best immunity we can get, and that is vaccination,” he continued, noting the need for continued masking, physical distancing measures and frequent handwashing.