Democrats line up to challenge GOP in some Northern Kentucky primaries

Democratic voters will decide on a number of competitive primary races in the deep-red Bluegrass State. 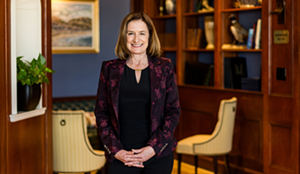 Bellevue's Patti Piatt is competing with Christina Lord and Seth Hall in the Democratic primary that will decide who opposes U.S. Rep. Thomas Massie in November.

Ahead of the May 22 primary election, the big race in Northern Kentucky is for the state’s 4th Congressional District. Incumbent Thomas Massie (R) is running unopposed in the primaries but will face the victor from a crowded field of Democrats, which includes Patti Piatt, Christina Lord and Seth Hall.

Kentucky Tonight host Renee Shaw moderated a 30-minute debate between the three Democrat candidates on April 16. The trio agreed on most matters, but Lord leaned left of the pack when she suggested raising the nation’s minimum wage to $22 and tariffing U.S.-based companies with international production facilities.

There’s no clear front-runner in the race thus far, but Piatt seems to have raised the most money — about $24,000 — finance reports released March 31 show. Hall has raised about $20,000. Fundraising figures for Lord were not available.

Northern Kentucky primary voters will also decide on a number of statehouse races for districts in Boone, Campbell, Carroll, Gallatin, Grant, Kenton, Pendleton and Owen counties: fourteen seats are up for grabs in the General Assembly — two in the Senate and 12 in the House. Only four of those house races, however, have competitive primaries this year.

Republican incumbent Sal Santoro, representing Kentucky’s District 60, took office in 2007 and has not faced any challenger since beating out Independent candidate Sean McPhillips in 2010. Santoro, a former Kentucky State Trooper, is once again running unopposed in his own party, but two Democratic candidates have thrown their hats in the ring: Boone County sales manager Jesse Parks and retired special education teacher Roger Rankin.

District 61 Representative Brian Linder decided not to seek reelection after he admitted to settling a sexual harassment complaint with a legislative staffer. That vacancy has four new candidates chomping at the bit: Dr. Michael Fletcher and political organizer Savannah Maddox are competing in the Republican primary, while high school guidance counselor Susan Back and former Grant County Judge-Executive Darrell Link are fighting for the Democratic nomination.

Democratic candidates Adam Sovkoplas and Jenny Urie are looking to challenge Republican incumbent Philip Pratt, who represents Kentucky District 62. Pratt voted in favor of controversial Senate Bill 151, which sought to change the way Kentucky provides pensions for some public employees. Both of his hopeful challengers think that could make him vulnerable in November.

In District 69, middle school teacher Ryan Neaves and law school professor Col Owens, both Democrats, are hoping to unseat Republican incumbent Adam Koenig, a real estate agent who has faced zero political opposition in six years. Like most Democrats running in Northern Kentucky, both Neaves and Owens promise to funnel money into public schools and away from charters, as well as fully fund state employees’ pension.

Primaries typically see low voter turnout, but this year could be different. Other states, including Texas and Illinois, have already seen higher participation rates than usual, especially from Democrats. Kentucky abides by a closed primary system, meaning only registered party voters can cast their ballot for the party’s nominees. For information on your district, go to lrc.ky.gov; to find your polling place, go to elect.ky.gov.