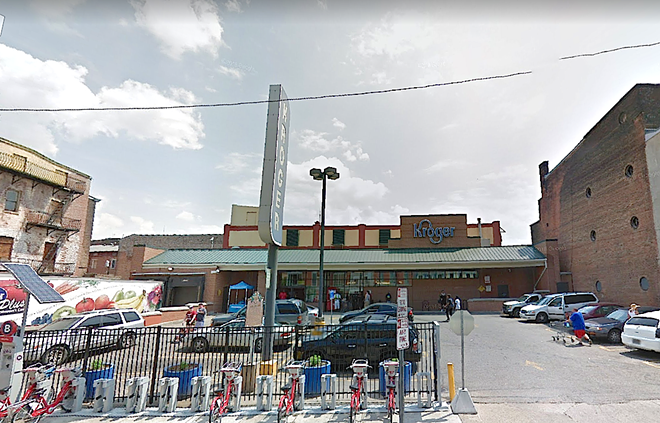 When one grocery store opens, another closes — and likely gets turned into a parking lot.

The Cincinnati Historic Conservation Board Monday ruled that the Kroger location at 1420 Vine Street in Over-the-Rhine can be demolished, making way for a surface parking lot and possible future development by the Cincinnati Center City Development Corporation (3CDC).

The store will be torn down after the coming downtown two-story Kroger at Court and Walnut streets opens this fall. The Vine Street structure itself isn’t necessarily an important piece of historic architecture, but it sits in a historic district, requiring the HCB to weigh in on its fate.

A plaque outside the store says Kroger opened one of its first retail and bakery locations near the site, but Cincinnati City Conservator Beth Johnson told the board that the building itself doesn’t contribute to the historic character of the neighborhood.

The parcel is just over a half-acre, Johnson said, but there is enough space for a parking lot and a building or for a larger mixed-use development.

Currently, the parcel is part of a tax increment financing agreement that runs for the next 13 years. It’s unclear what 3CDC will develop there permanently, but the property will become a surface lot in the interim.

“The parking lot will be a paid parking lot and is being designed such that the western portion of the property could be redeveloped, and the parking lot would still be able to function with access from Walnut Street and E 14th Street,” the demolition application reads.

According to the application, the lot will be screened from the street by brick columns, black fencing and “ample landscaping.”