The law takes effect in 90 days and all Ohioans aged 21 and older who are lawfully allowed to possess a weapon will be able to carry it concealed on their persons. 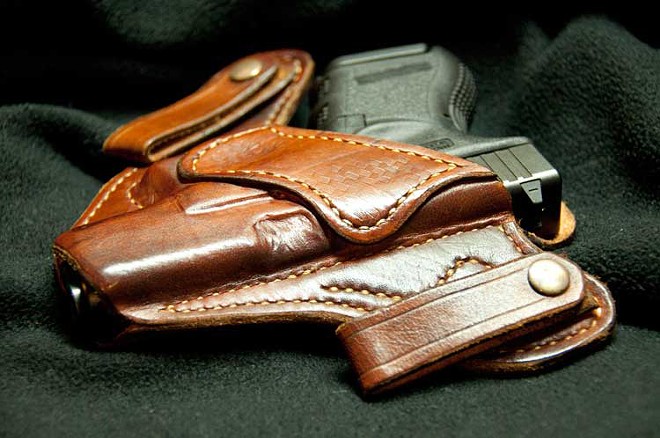 Photo: Webmaster102, CC BY-SA 3.0/Wikimedia Commons
Ohio will now be the 23nd state in the U.S. with a permitless carry law.

When the law takes effect in 90 days, all Ohioans aged 21 and older who are lawfully allowed to possess a weapon will be able to carry it concealed on their persons. Prior law required them to undergo eight hours of training, a background check and an application through their local sheriff.

The enactment of “constitutional carry” or “permitless carry” marks a long-coveted win for the gun rights movement and firearms lobby, and a major loss for Democrats, anti-gun violence activists, police organizations and public health researchers who opposed it.

Ohio is now the 23rd state in the U.S. with a permitless carry law, according to a count from the U.S. Concealed Carry Association. Several states including Iowa, Tennessee, Texas and Wyoming passed versions of the law in 2021. Alabama signed the legislation into law just last week.

“This is a day that will go down in history,” said Dean Rieck, Executive Director of Buckeye Firearms Association. “The brass ring has always been to eliminate the licensing mandate … and now, finally, that day is here. This is a great moment for Ohio and for those who wish to more fully exercise their Constitutional right to keep and bear arms.”

The bill passed the House 58-36, with only Republicans in support. Two Republicans voted in opposition with Democrats, though at least one said he did so only because the bill does not go far enough.

Supporters of the legislation say it’s a logical extension of the Second Amendment to the U.S. Constitution, which states: “A well regulated Militia, being necessary to the security of a free State, the right of the people to keep and bear Arms, shall not be infringed.”

Sen. Terry Johnson (R-McDermott), the bill’s lead sponsor, said in a floor speech the bill is also in some ways a response to protesters “burning down their own cities” — a reference to racial justice protests that formed in the wake of a police officer murdering George Floyd during a stop in the summer of 2020.

For instance, the American Journal of Public Health found that states with looser concealed carry regulations were associated with an 11% increase in handgun homicide rates than states with stricter policies. Modeling from the National Bureau of Economic Research found states that adopt concealed carry laws experience between a 13% and 15% increase in violent crime in the 10 years after implementation.

According to the Health Policy Institute of Ohio, between 1999 and 2020 there have been large increases in annual rates of homicides (123%) and suicides (49%) in the state. While the prevalence of guns in suicides is steady, they’re becoming increasingly prevalent in homicides.

However, gun supporters often point to a study published in the American College of Surgeons that didn’t identify any significant association after states adopted looser gun policies.

In a statement, House Minority Leader Allison Russo criticized DeWine, emphasizing the thousands of concealed carry permits that are denied, revoked or suspended every year under the current system. While permitless carry doesn't change who can possess a gun, it removes an additional layer of scrutiny within the current system.

“Removing these responsible and reasonable precautions compromises the safety and security of our communities and law enforcement," Russo said. "SB 215 completely betrays Ohioans who have called time after time for commonsense gun safety legislation, not extreme bills that endanger the lives of our children and families. Republicans have made it crystal clear that they value the approval of the gun lobby more than the lives of Ohioans and the police officers who protect our communities every day.”

Gary Wolske, president of the Fraternal Order of Police of Ohio, spoke out against the law in a Columbus Dispatch column. He argued the requirement to seek a permit is a reasonable one that strikes a balance between constitutional rights, officer safety and public safety. The new law also removes a requirement under current law that those carrying a weapon "promptly" notify an officer that they're armed. Instead, people who are carrying need only inform an officer they're armed if the officer asks.

The Ohio Supreme Court has held since 2003 that “there is no constitutional right to bear concealed weapons.” While the right to bear arms, the court said, is fundamental, it is not without limitations.

Since then, Ohio has steadily loosened its gun laws.

Two years later, the legislature passed a law preemptively blocking Ohio cities from passing any gun restrictions stricter than those established by the state. The law was used to squash lawsuits from Ohio cities including Clyde, Cleveland and Cincinnati seeking to regulate guns within their borders.

In March 2015, a new law reduced the required training hours to receive a concealed carry permit to eight from 12. Early last year, DeWine signed a “stand your ground” bill into law, which removes the legal requirement that a person try to retreat from a perceived attack before responding with lethal force.

The governor announced passage of the permitless carry bill in a news release comingled with several other bills. He didn't offer any comment.