DeWine: 'We Need More People to Wear Masks' as COVID Cases Continue to Spike in Hamilton and Montgomery Counties

“The most important thing we can do is what individual Ohioans can do. If we want to be able to go out and live our lives, this mask is a symbol of freedom." 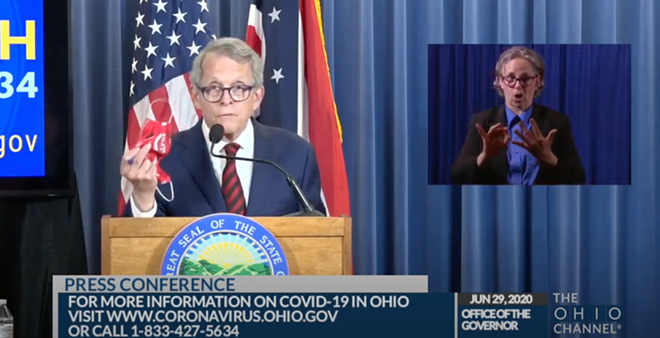 During his moved-up COVID-19 press briefing today (it had been scheduled for Tuesday), Ohio Gov. Mike DeWine said from June 21-27, the state saw its first week of increasing coronavirus hospital utilization in over two months.

"April was the last time we had this much," he said.

According to DeWine, the number of standard hospital beds occupied by COVID patients peaked in late April and early May at about 1,000. The state hit a low of 513 patients June 20 and had 550 hospitalized COVID patients last week. This week, there are 650.

That occupancy is most prevalent in Cleveland, Dayton and Cincinnati. But there are still enough hospital beds available throughout the state to accommodate patients, he said.

Although #COVID19 utilization in hospitals is increasing, there is adequate overall capacity. No region has reached the concern threshold of 80% overall utilization for ICU beds. But we know from the lessons of recent history in NYC, TX, & AZ that this can quickly change.


The specific focus of the state's uptick in cases remains in Hamilton and Montgomery counties. DeWine said Vice President Mike Pence and White House officials were also very concerned about the increasing number of positives and have offered to give additional help.

At the end of May to early June, Hamilton County was reporting 30 cases per day per 100,000 people. As of this week, the average new rate was 100 cases per day per 100,000 people. There were 130 COVID patients in Hamilton County hospitals this week, up from 65 on June 11. COVID patients in Dayton hospitals also doubled from the first week of June.

DeWine said due to delayed diagnosis and reporting, these numbers may continue to grow.

While some have called on the governor and asked whether or not this surge is related to increased testing, he said a portion can certainly be attributed to that but that experts have said it is necessary to also look at the positivity rate — or the percentage of coronavirus tests that come back positive.

You may be wondering if the increased cases are simply because Ohio has worked so hard to ramp up our testing. Certainly, some is due to that, but not entirely. You have to look at positivity. pic.twitter.com/gVd83QInl6


“As we’ve talked about before, we’ve been running between 4% and 6% (positivity). Not horrible. We would like obviously for it to go down," DeWine said.

It has not gone up dramatically but it hasn’t dropped, he said.

So he reiterated the importance of making sure you social distance, wash your hands and wear a mask in public to make sure there are enough hospital beds, if we need them — especially locally — and so we don't have to step back any reopening efforts in Ohio like the governors in Texas, Florida and California have had to do.

California Gov. Gavin Newsom has told the bars in seven counties they have to close again and local California health departments are closing them in eight other counties due to the spike in the state's COVID-19 cases; Texas Gov. Greg Abbott scaled back restaurant capacity and closed bars again to try to control the spread of the virus there; and as of June 26, Florida shut its bars again as well.

When asked if we could see bars or restaurants close in either Hamilton or Montgomery counties — or Ohio in general — DeWine said what is happening in those states "should frighten us."

"It frightens me as the governor of Ohio and that’s why we’re working so very, very hard, frankly, to talk about wearing masks, to talk about keeping distance," he said.

“We need more people to wear masks. When people go into a restaurant, when people go into a jewelry store, when they go in and buy anything inside, they need to have a mask on. These are the things we know that we can do. As we used to say when I was a prosecutor, the jury’s still deliberating, the jury’s still out — we don’t have an answer yet of what our future looks like. We determine our future, just as Ohioans determined their future during the early parts of this virus, and did a phenomenal job, we have to do that now.”

He said only Ohioans can control what happens to us and so far the data "isn't looking good."

“The most important thing we can do is what individual Ohioans can do. If we want to be able to go out and live our lives, this mask is a symbol of freedom. It’s a symbol of freedom because if we wear these — if we get 75%-80% of the people who are out in public who are wearing this mask, we are going to see these numbers get better," he said.

And he mentioned testing.

If you are in Dayton or Cincinnati, he said you should get tested so that if you do have COVID and are asymptomatic, you know to stay home and quarantine to protect others.