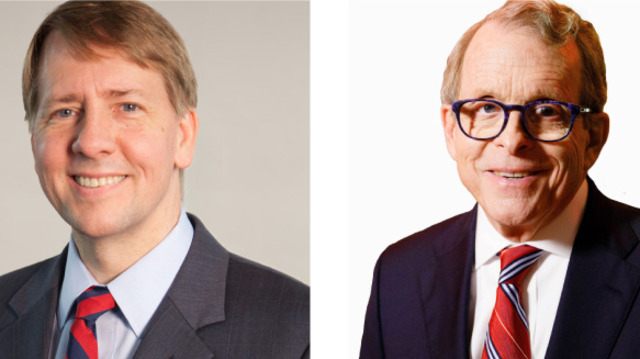 Ohio Attorney General Mike DeWine, a Republican, has prevailed in his bid to be governor of Ohio over his Democratic opponent Rich Cordray.

With 92 percent of Ohio voting precincts reporting, DeWine had 51 percent of the vote to Cordray's 46 percent.

DeWine's victory means that the state will have a Republican governor for a third term in a row, following Ohio Gov. John Kasich's eight-year stint.

The governor's contest was never going to be about charisma: owlish DeWine is a textbook career politician, having served two terms the Ohio Senate, four terms in the U.S. House, two in the U.S. Senate and a three-year stint as Lt. Governor under George Voinovich.

Cordray, meanwhile, has taken a winding route through private law practice and public office. The former Marshall Scholar clerked for the U.S. Court of Appeals in Washington, D.C. before serving a term in the Ohio House of Representatives. Campaigns for U.S. House, Ohio Attorney General and the U.S. Senate followed. Eventually, Cordray won election to be Ohio Treasurer in 2006, and then Ohio Attorney General in 2008.

During Cordray’s gubernatorial campaign, he had been keen on making oddly contemplative observations on Twitter and rather staid campaign appearances. He rocks what you might call a semi-bowlcut. Add to this that neither DeWine nor Cordray are noted public speakers and you have a recipe for a snoozer.

Rockstars they are not. And yet, there was plenty of heat in the race between the two. A bit of that came because the race was something of a rematch: DeWine toppled Cordray from his perch as Ohio Attorney General in 2010. Most of it, however, was likely the result of the fact the two were vying for the top executive office in Ohio in an incredibly polarized political atmosphere.

The national political tensions that have grown during the Trump administration were on full display in the campaigns.

The two debated most heavily on health care — still a hot-button national issue. Cordray wanted to preserve Ohio’s Medicaid expansion and hit DeWine with charges that he would strip Ohioans of the healthcare offered by the ACA, especially its provision protecting those with pre-existing conditions. DeWine, meanwhile, had a murky stance on the issue: as attorney general, he brought Ohio into a lawsuit against the Obama administration fighting the Affordable Care Act. But he also says he wouldn’t end Ohio’s expansion or the ACA’s protections for preexisting conditions.

DeWine has taken a hard-right tack during his attorney general stint by taking on Planned Parenthood and suffering several losses in federal court. Most recently, he tried defending a state law that sought to defund Planned Parenthood over its provision of abortions (the organization receives some state funds for health screenings not related to abortion). An appellate court ruled in April that the law is unconstitutional.

Those battles likely didn't change many peoples’ minds — pro-life advocates probably saw DeWine’s court fights as worthy efforts and pro-choice voters viewed them as confirmation of DeWine’s ideological stance — but they do illuminate the degree to which DeWine and Cordray, whom Planned Parenthood endorsed in May, differ.

Another issue, however, seemed as if it would be more decisive for some voters choosing between DeWine and Cordray: the scandal involving the Electronic Classroom of Tomorrow, which closed earlier this year after the Ohio Department of Education ordered it to pay back millions in taxpayer funds paid to the online charter while it was flubbing attendance numbers. Audits showed irregularities in ECOT’s record-keeping as far back as 2001.

ECOT founder Bill Lager and others at the charter have donated more than $2 million to candidates — almost all of them Republican. That includes money to both DeWine and Husted, though DeWine later donated that money to charity. While donations to DeWine and Husted numbered in the tens of thousands of dollars, Cordray also received small donations of a few hundred dollars. He donated those to education groups.

DeWine’s critics said that he should have acted quicker to bust ECOT as it was taking in millions for students it didn’t educate. DeWine didn’t take action until well after ECOT’s troubles were well-established, though he did file legal action seeking recovery of millions from Lager and others this year. DeWine countered his critics by saying his role as attorney general was limited and that he took action when he could. Others found that claim dubious, but say DeWine isn’t the only one to blame.

Cordray skated through the campaign relatively gaffe-free, but one issue may have hurt him with the moderate voters he needed to win the election: Issue 1, an attempt to reform Ohio’s drug possession laws.

DeWine’s campaign hammered Cordray over his support for the initiative, saying that Issue 1 would lead to reduced charges and no jail time for fentanyl traffickers. The amendment’s language made clear that prosecutors could still charge those caught with drugs like fentanyl with trafficking, however, and that only penalties for possession would be changed by the new rules. That, however, didn't help its fate at the ballot box.

In a speech tonight, DeWine attempted to sound a conciliatory note, praising Cordray as "talented" before promising to serve the state.

Cordray, for his part, vowed to continue in public service during his concession speech.

"You engaged in this campaign," he said, thanking his supporters. "You dared to believe that all of this was possible. Even if you were not proved right this year, you will be proved right in time if you refuse to give up.”