Displaced from OTR, a small business starts again in Northside

Reginald Stroud had to move out of OTR when a developer purchased and redeveloped the building where he lived, worked and ran a martial arts studio. 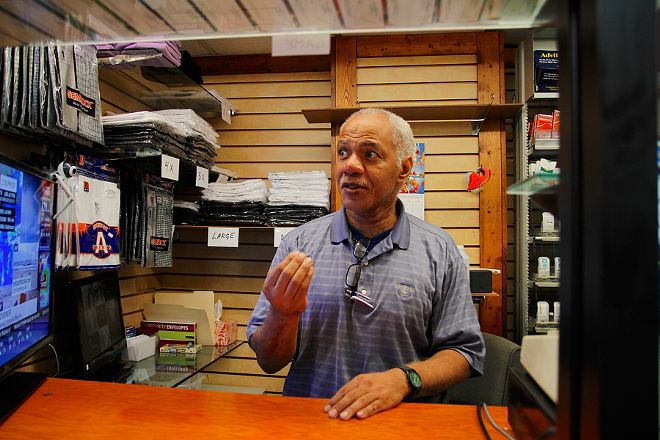 Nick Swartsell
Reginald Stroud at his store in Northside.

Behind the counter of Anybody’s Dream convenience store in Northside, 56-year-old Reginald Stroud points to a TV flashing red and yellow satellite imagery of  Hurricane Irma to explain the way his last three years have felt.

His plight isn’t exactly the same as folks affected by the storm, he says, but there are parallels. As CityBeat reported two years ago, Stroud, his wife and their three children lost their apartment, convenience store and a martial arts studio in Over-the-Rhine in 2014.

“It’s like people displaced from their homes by a natural catastrophe,” he says. “You don’t have time to really think about what’s behind you. You’re trying to exist from day to day. That’s what we’ve been doing for three years.

“When I start to see this come to fruition again, it’s sort of surreal,” he says, surrounded by a selection of T-shirts, individual medicine packets, knit caps in black and periwinkle, hair product in jars and two-cent candy.

“This,” Anybody’s Dream, is a small store near the busy bus stop on Hamilton and Spring Grove avenues. Stroud reopened here Sept. 29, hoping to recapture the rhythm and community he had in OTR.

There has been a lot of struggle, financial and otherwise, between his old store and this one. Stroud, who is black, had to move out of OTR when developer Urban Sites purchased and redeveloped the building where he lived and worked at 1125 Walnut St.

In some ways, his story is an illustration of larger trends.  For decades, OTR has been majority black. But recent Census data suggests that is changing. The Census tract where Stroud lived was 36 percent black when he left; it was 60 percent black just four years prior in 2010, according to estimates from the Census Bureau’s American Community Survey.

The more than $400 million spent by groups like the Cincinnati Center City Development Corporation to redevelop OTR has, until recently, been limited to the southern part of neighborhood, where the building Stroud lived in is located. Those efforts have changed the economic, and perhaps the racial, makeup of the area. South of Liberty Street, the median household income for the once-impoverished neighborhood was $40,000 and rising, according to 2010 Census data. North of Liberty, where little development has occurred, the median income was just $11,000.

The ACS isn’t as precise as the 10-year Census, and the demographic changes can’t be definitively attributed to gentrification alone. But the data does seem to show a clear decrease in black residents in the area. Some, including Stroud, say that’s due to the frenetic redevelopment the neighborhood has seen.

Urban Sites, which purchased the property on Walnut from its previous owner, told CityBeat in 2015 that it was "unsafe, unsanitary and economically unsustainable," necessitating the relocation of tenants. Today, it houses offices for startups and features rents that are double or more what Stroud was paying.

Stroud was given $200 and 45 days to pack up his life and find a new home. That was challenge number one.

He looked at as many as eight places a week, trying to find the right spot to re-root his life. None were perfect for him and his family. None had potential to host his businesses. In the end, he says, he settled on a place on the liminal edge of Northside, between the gray wall of concrete that carries I-74 like a whooshing river and the green, eternal quiet of a cemetery. The security deposit and moving expenses drained his savings.

It was hard to explain to his children, who were in preschool and middle school at the time.

“They knew that something traumatic had happened,” he says. “They asked, ‘Why do we have to move from here?’ They were in school down there. There was a big pool of support down there. I couldn’t explain why we had to leave.”

With the move came big lifestyle shifts. Anybody’s Dream on Walnut Street had been the Stroud family’s main source of income, with the martial arts studio providing some supplement. Suddenly, that was gone.

Stroud took to selling items on Amazon and Ebay, as well as making a little money on YouTube videos. His wife, meanwhile, took a job at an Amazon warehouse.

He also had to use his house to teach Jinen-Do — his own mix of martial arts traditions he has studied over the last four decades. An annual tournament he holds in Evanston skipped a year after the move as Stroud dealt with his new circumstances.


Longtime student Maxine Watson says rolling with the punches is a hallmark of Stroud’s approach, whether it’s in his retail pursuits or his martial arts teaching.

“That’s Jinen-Do,” she says, referring to Stroud’s resilience. “It conforms to what we have. He makes do with what he has.”

Watson has been studying with Stroud for eight years and remembers the days when his store and his studio on Walnut Street were in the same room. People would come in to get candy, she says, and stay to watch students practice.

Watson’s daughter, now 28, started taking lessons from Stroud when she was eight, and her husband has been a student for 15 years. Watson says Stroud’s warmth and affirmations keep her family coming back.

“He makes you feel like you can do anything,” she says.

Stroud’s 25 or so students span generations. Some are 5 years old, others are in their 50s. Most are black, though there are a few white students, too.

“It’s one of the things I think we can express ourselves with,” Stroud says about martial arts and his students. “I can go out into the sporting arena and win some trophies. Plus, it gives you a sense of belonging when you see a lot of your people doing this thing, too. There’s camaraderie there.”

Someday, Stroud would like to get a studio again, ideally close to Anybody’s Dream. But for now, he says, he’s concentrating on the store. He’s working 9 a.m. to 9 p.m. nearly every day and has set up a study room for his kids so they can be close by.

“I’m trying to give it everything I can and push it as hard as I can,” he says, “so at the end of the month I can sit down with my records and ask, ‘Is this good?’ ”

Stroud first opened a convenience store in Madisonville in the 1990s with a few hundred dollars. He is operating on the same budget now, though he started a crowd-funding campaign to help with the costs of fixing up the store, paying the utility deposit and the like.

He has reviewed the revenues the former ownership drew in and knows exactly how he wants his store to run: Draw people in with candy and inexpensive items, even though those sales don’t ad up to the rent payment. Ask them questions, get to know them, be welcoming to everyone and cut deals when someone can’t afford something. Then they’ll support you and buy the things that pay the bills when they can.

“The old mom and pop mentality — you don’t find that much anymore,” he says. “You want a cookie but you only have 10 cents? It’s right here. This is not just my store trying to pull money from your community. It’s my community, too, because I live here.”

Coolers full of malt liquor from the former owners stand taped off in the back corner.

“That’s not the nature of my business,” he says. He didn’t want to sell tobacco, either, but compromised to make the store more viable. It’s a challenge, but one he relishes.

“It’s a coat you wear every day,” Stroud says. “Get up, turn the coffee pot on, open up the door. It’s a regimen. To have that taken away from you, when it’s something you love, when you’re expecting that door to open on cue — it’s painful.”

On opening day at the Northside store, the regimen was back. Customers wandered in, attracted by a colorful mural above the door painted by Abby Friend, who lives near Stroud.

Friend first learned about Stroud via a documentary called Good White People made by local filmmakers Jarrod Welling-Cann and Erick Stoll. Friend and Stroud kept bumping into each other in Northside and soon got to know each other well.

Stroud’s story resonated with Friend, who sees Northside shifting in ways similar to OTR. Others in the community share that concern, which is stoked by the neighborhood’s popularity and new development there.

Between 2010 and 2015, according to data from the U.S. Census Bureau’s American Community Survey, median rents in Northside’s four Census tracts went up more than $100 a month.

“Reginald takes so much pride in what he does, and I admire that,” Friend says. “I admire his interest in creating community through small interactions. I see our community changing, rent prices going up, restaurants charging $13 for a sandwich at lunch, and it’s hard to see myself as part of this neighborhood anymore.”

Painting the mural took 25 hours over three days, Friend says, but it was well worth it.

“I want non-white, non-male, and working class business owners to be seen and recognized as an important part of our community’s future, past and present,” Friend says. “Anybody’s Dream is more than just a store. It is a place of persistence, resistance and sheer will.”