Donald Trump Is Coming To The Kentucky Derby For A $75,000 Per Ticket Fundraiser

Former President Donald Trump will allegedly be in attendance for the 148th Run for the Roses at Churchill Downs in Louisville, Kentucky, next month. 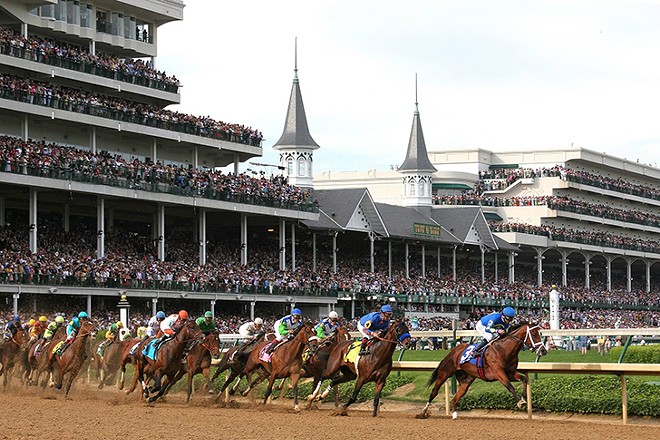 Former president Donald Trump will be in attendance for the 148th Run for the Roses at Churchill Downs next month, according to a copy of an event invitation shared online by New York Times reporter Maggie Haberman.

“MAGA AGAIN!” reads the top of the invitation, which invites guests to spend the Kentucky Derby at Churchill Downs “with special guest President Donald J. Trump.”


Trump is set to appear a fundraiser his super PAC is holding at the Kentucky Derby, in McConnell’s state pic.twitter.com/2tYc7r8E6x

Haberman, the journalist who tweeted out a copy of the invitation, covered the Trump campaign and administration for The New York Times. She has a reputation for breaking news on Trump and getting access to sources in his orbit.

In a statement to LEO, Churchill Downs spokesperson Darren Rogers said: “Every year, many high profile individuals choose to attend the Kentucky Derby, including prominent political figures. We do not comment on or confirm the attendance of individual guests or those holding private events not coordinated by Churchill Downs.”

The mayor’s office struck a similar tone, saying: “The Kentucky Derby is a signature event for our city and state, and is a draw for celebrities each year. We are well-prepared and equipped to handle high-profile guests.”

At times in recent years, Trump has repeatedly tried to draw parallels between Derby outcomes and his perception of the faltering state of the nation.

In 2019, Trump lashed out against the disqualification of Maximum Security, who was the first horse to cross the finish line but was deemed ineligible for victory after video review showed his leg bumping into another horse.

“The Kentucky Derby decision was not a good one,” Trump wrote on his now-removed Twitter account. “It was a rough and tumble race on a wet and sloppy track, actually, a beautiful thing to watch. Only in these days of political correctness could such an overturn occur. The best horse did NOT win the Kentucky Derby — not even close!”

“This is emblematic of what is happening to our Country,” he wrote in a statement about last year’s Derby. “The whole world is laughing at us as we go to hell on our Borders, our fake Presidential Election, and everywhere else!”

In 1999, Trump attended the Derby with his then-girlfriend Melania Knauss (now Trump).

The former president also had a brief foray into race horse ownership.

In the 1980s, as Trump was building his casino and real estate empires, he agreed to purchase a potential triple crown contender named Alibi under the condition that its name be changed to D.J. Trump according to a 2017 Washington Post article recounting a 1991 tell-all book by former Trump Plaza Hotel and Casino president Jack O’Donnell. However, amid disagreements over the price and the horse falling ill, Trump reportedly reneged on the deal.

According to the Washington Post, records show that in 1990, after Trump had abandoned the horse deal, D.J. Trump sired a filly named A Date With Marla. (That year Trump had left his first wife, Ivana, for Marla Maples. His relationship with Maples was covered extensively in the press at the time).