The Cincinnati Enquirer news department has seen some hard times this week, taking down stories about rich people being  arrested and now admitting that it was a bad idea to publish a trashy collection of mug shots and arrest reports about people who are likely mentally unstable or addicted to drugs.

CityBeat reported yesterday that The Enquirer took down a story about police arresting Robert S. Castellini, son of Reds owner Bob Castellini, and his wife Sunday night for allegedly fighting in front of their children. Enquirer Editor Carolyn Washburn explained in an email to CityBeat that the story wasn’t pulled because any super-powerful local business leaders whose team is hosting the 2015 Major League Baseball All-Star Game complained. She says neither the Castellinis nor anyone else contacted The Enquirer about the story. Someone in the news department apparently used flawed news judgment and then someone else posted the story online before it had been properly vetted by editors. Nothing sinister — just general, run-of-the-mill incompetence.

"An editor determined — and I agreed — that it did not meet our news standards for publication," Washburn wrote to CityBeat in an email Wednesday evening. "The Mr. Castellini in question is not a public figure, has nothing to do with the Reds, etc. We don't report every domestic charge in the community. But while that was being discussed, someone posted it. We quickly took it down but not before it began to get traction." 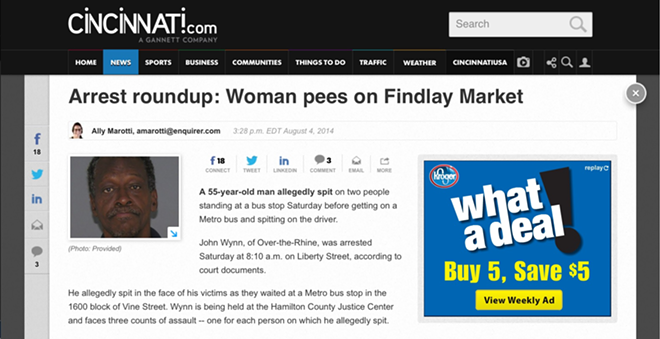 The story on Castellini was deleted, but the arrest roundup lives on.

Washburn says the arrest roundup was just another news-gathering fuckup.

“That was an aberration and not something we'll be doing more of,” she wrote in an email to CityBeat this morning. “That's not the kind of coverage we want to do.”

If true that The Enquirer’s news department plans to back off dramatic stories about poor people going to jail, perhaps focusing more on the causes of poverty than the effects, it would be a good day for the tens of thousands of impoverished, mentally ill and drug-addicted Cincinnatians continually underserved by city budgets that under-fund human services.

In the meantime, someone is still covering the Enquirer pee beat with gusto, although this one seems fairly deserved — Art Modell definitely screwed Cleveland over back in the day.