A plan to end Ohio's long-criticized electric security plans comes from a primary sponsor of HB-6, the 2019 law at the heart of a $60 million corruption case. 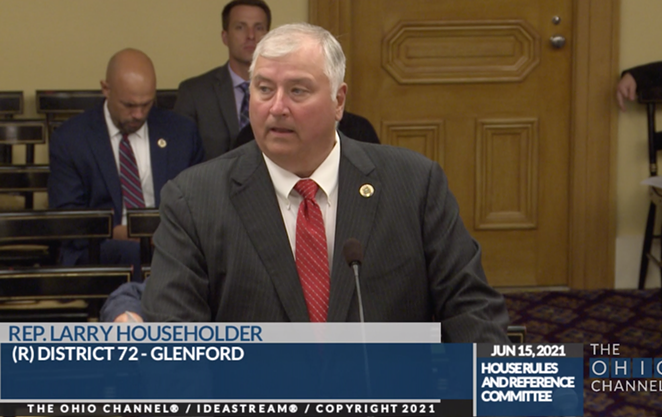 A new plan is on the table to phase out rate programs that have let Ohio’s electric utilities collect billions in subsidies over the past dozen years. But the bill aims to continue coal plant subsidies and cuts authority for utility energy efficiency programs.

Critics also worry that vague wording will continue cross-subsidies in another guise.

For years, consumer advocates, environmental organizations and conservative groups have pushed to end so-called Electric Security Plans, or ESPs, which allow utilities to add riders and other charges without full regulatory review. Many of those produced cross-subsidies that ratepayers can’t avoid.

In one extreme example, a Cleveland neighborhood group received a $70 monthly bill in 2019 for a single lamppost, with only 38 cents going to electricity.

A 2017 bill tried to end the practice, but it stalled in the Ohio House.

Now, House Bill 317 would slash statutory provisions for the plans. The bill, introduced last month, comes from Rep. Shane Wilkin, R-Hillsboro. Wilkin was a primary sponsor of HB 6, the 2019 nuclear and coal bailout law that also gutted the state’s clean energy standards. And it aimed to “recession-proof” utilities by letting them guarantee revenue levels under their 2018 Electric Security Plans.

Rep. Larry Householder, who pushed HB 6 through the legislature, following his indictment in a $60 million bribery scandal over the legislation. Wilkin was one of 21 lawmakers voting against the expulsion.

ESPs have let utilities “build and own electric generation, with [Public Utilities Commission] approval, and charge their captive customers,” Wilkin said in his sponsor testimony for HB 317. He did not return phone calls seeking comments for this article.

“Across all utilities we have a low of 11 and a high of 47 riders,” Wilkin’s testimony added. “In total, there are over 200 separate riders that ratepayers could be paying depending on the [utility] service area and customer class.”

Attorney Rob Kelter of the Environmental Law & Policy Center called ESPs “a terrible way of utilities getting all these different riders onto people’s bills without having to go through a rate case that goes through all their costs and revenues. That’s fundamentally the problem.”

Full-blown rate cases “look at all the utility’s costs and revenues together,” Kelter said. If utility costs go up in one place but down somewhere elsewhere, the regulators would consider all of that. “Whereas the rider just adds whatever new expense the utility has to the bill on top of everything else.”

For example, FirstEnergy’s utility customers paid nearly half a billion dollars under a no-strings-attached rider that was ultimately held unlawful. However, the Ohio Supreme Court didn’t order refunds because regulators didn’t specify that when they approved the charge. An ongoing audit is supposed to dig into whether FirstEnergy used money from the charge to pass and defend HB 6.

“Do we piecemeal modernization through ESPs versus a full-blown rate case?” Hill asked. Full ratemaking would let the Public Utilities Commission evaluate a utility’s overall modernization plan and avoid “gold-plated” capital expenditures. In contrast, he said, ESP riders let companies “build up the rate base to increase the rate of returns.”

Despite his sponsor testimony, Wilkin’s bill would let American Electric Power, Duke Energy and Dayton Power & Light (now AES Ohio) charge ratepayers through 2030 for electricity from two 1950s-era coal plants, known as the OVEC plants. OVEC is the Ohio Valley Electric Corporation, and its utility shareholders agreed to buy output from its Indiana and Ohio plants.

Regulatory decisions before HB 6 had let the three utilities pass through their share of those costs onto consumers. The 2019 law made the OVEC charges part of Ohio statutory law and extended them through 2030 for all Ohio utility ratepayers. Ohioans’ estimated costs for the plants through 2030 would be roughly $700 million.

Pending Senate Bill 117 aims to end the statutory subsidies and preclude any more charges for such pre-1960 plants. “It also orders refunds for the charges already collected under HB 6,” said Sen. Hearcel Craig, D-Columbus, who is co-sponsoring SB 117 with Sen. Mark Romanchuk, R-Ontario.

“This is the best deal for Ohioans, rather than letting these charges continue for the next nine years,” Craig said. “If there are conflicts between SB 117 and HB 317, the legislature’s priority should still be ensuring that Ohio customers are no longer paying for OVEC.”

At the same time, HB 317 would “eliminate the ability for the [Public Utilities Commission] to potentially approve a voluntary energy efficiency program,” Wilkin said in his testimony. “While I am not opposed to the idea, it is my understanding that Rep. [Bill] Seitz is working with parties on crafting such a program. This bill can potentially accommodate those suggestions.”

Seitz aide Jon Fausey said work is underway on an energy efficiency bill, with a goal to have a draft in the “near future.”

Wilkin’s statement didn’t explain why the law should cut out authority for energy efficiency programs in the meantime. Without programs to reduce wasted energy, Ohioans stand to lose between $2 billion and $5 billion over the next decade, a March 2021 report found.

“It’s not a surprise that we have this legislature continuing to thumb its nose at reality — which is that programs reducing waste save customers money and reduce the amount of energy we need,” Waggoner said.

Riders by another name

“It turns the rate negotiations into an insiders’ game,” Hill said, noting that details usually are kept from the general public. “Companies that are big enough and sophisticated enough know how to approach the utility bar to sign up and try to negotiate a rate. That is just inherently market-distorting. … It’s just bad economics.”

Vague language might even let utilities justify other charges under the guise of economic development and job retention, Dormady said. “Economic development was one of the main arguments of the people who wanted to subsidize those two nuclear plants” to the tune of roughly $1 billion under HB 6, he noted.

HB 6 “incentivizes business here. It reduces risk. It gives them some lower costs and predictability,” Wilkin said at an April 12, 2019, press conference with Householder and co-sponsor Jamie Callender.

“House Bill 6 requires that the generation be in Ohio, therefore creating Ohio jobs,” he said in an August 2020 letter to the Highland County Press. He did not note that a 2014 law eliminated terms that had required at least half of the energy under Ohio’s renewable standards to be in-state.

Other defendants in the federal case include Jeff Longstreth, who worked on Wilkin’s campaign in 2018. Longstreth had been the principal for JPL & Associates, which was the president/secretary and principal officer for Generation Now. That dark money organization and Longstreth both have pled guilty.

Duke Energy’s plans “have consistently provided diverse customer and stakeholder benefits and we look forward to participating in conversations that affect our customers in southwest Ohio,” spokesperson Lee Freedman said.

“While we are following the discussions around HB 317, we remain focused on delivering safe, reliable electric service to our customers,” said FirstEnergy spokesperson Mark Durbin. Asked for clarification, he said, “We do not have anything additional to add at this time.”

This story was originally published by Eye on Ohio and republished here with permission.