It's been a long week, with an FBI chase, a shooting, a new stadium name and a baseball game played in a field of corn. 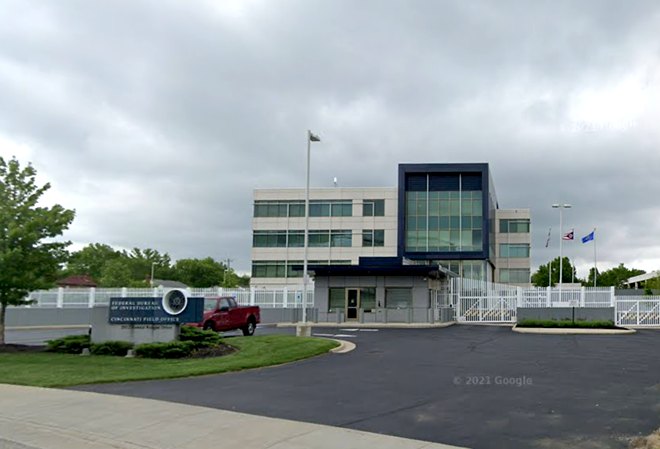 "What a year this week has been," as the meme goes. This week, Greater Cincinnati found itself in the spotlight for an FBI chase, a nightlife district shooting, a new stadium name, a baseball game played in a field of corn and Pete Rose's continued repugnant comments. Catch up on the headlines below.

Authorities Shoot Armed Suspect Who Led Cincinnati FBI Agents on Chase to Wilmington
The FBI's pursuit of an alleged armed gunman ended in death Thursday. Details continue to emerge about the day-long Aug. 11 incident in which a variety of law enforcement agencies ended up in a standoff near Wilmington with a man who had attempted to break into the Federal Bureau of Investigation's Cincinnati field office in Kenwood. After attempting to negotiate, police shot that man, who may have had ties to extremist groups and who may be a supporter of former U.S. President Donald Trump's continued lies about the 2020 general election. Read CityBeat's story about the Cincinnati standoff and what people are finding about the suspect's background online.

Cincinnati Police Arrest Two People for Aug. 7 Over-the-Rhine Shooting
An Aug. 7 shooting in Over-the-Rhine left nine people injured, but two suspects have been caught. Diablo McCoats, 29, and Jarvis Barnes, 34, are being held in the Hamilton County Justice Center, and each could face more than 80 years in prison. Residents and business owners tell CityBeat that dismayed at the continued rise in local gun violence. During an Aug. 11 press conference, Hamilton County Prosecutor Deters described the OTR incident as “some kind of petty turf thing they had a beef about,” but based on CityBeat's review of surveillance video, this theory is hazy. Read CityBeat's story about what the video footage shows and what police plan to do next.

Field of Dreams Game Full of Magical Moments, Despite the Reds' loss to Cubs
The Field of Dreams game itself didn't go so well for the Cincinnati Reds – the Chicago Cubs beat Cincinnati 4-2 – but there were plenty of magical moments in Dyersville, Iowa, on Aug. 11 that made players and fans alike marvel about baseball's ability to transcend almost everything. Major League Baseball's Field of Dreams game, which is an homage to the 1989 Kevin Costner film Field of Dreams, nearly had it all: industry stories from Joey Votto, Ken Griffey Sr. and Ken Griffey Jr. emerging from the corn to play catch, throwback uniforms and so much more. Read CityBeat's story to find out what other magic awaited fans during the Field of Dreams game.

Cincinnatians Can Finally Get the Monkeypox Vaccine
Cincinnatians can finally get the monkeypox vaccine, but only under certain circumstances – at least for now. Officials from the Cincinnati Health Department and Hamilton County Public Health announced Aug. 8 that both agencies have a limited supply of the vaccine. Both say the vaccines will be limited to those with high-risk health issues. To demonstrate need and obtain the vaccine, residents must complete a risk assessment on Cincinnati's or Hamilton County's websites. The departments then will coordinate directly with the patient for vaccine administration. Read CityBeat's story to find out more about the city's response to monkeypox and who initially qualifies to receive the vaccine.

Gov. Mike DeWine Declares Aug. 9 Dolly Parton Day in Ohio
Dolly Parton, the beloved country singer and literacy activist, has her own day in the Buckeye State. Now, Aug. 9 in Ohio is officially Dolly Parton Day. This brand new state holiday also coincides with National Book Lovers Day, which is far from a coincidence. After all, the Ohio Governor’s Imagination Library, which was founded in 2019, officially became Dolly Parton's Imagination Library of Ohio in July. Read CityBeat's story to learn more about the Parton's literacy initiative in Ohio. After that, read CityBeat's cover story about how book-exchange cupboards are bringing neighbors together to promote reading.


Biden Visits Eastern Kentucky, Promises Longterm Federal Help For Flood Recovery
U.S. President Joe Biden, along with U.S. First Lady Jill Biden, Kentucky Gov. Andy Beshear and Kentucky First Lady Britainy Beshear, spent Monday touring Eastern Kentucky, where 14-16 inches of rain fell July 26-29, leading to hundreds of people being displaced from their homes. During the Aug. 8 visit to survey damage from the severe flooding that left at least 37 people dead, UBiden said that the federal government is “staying” until the region is repaired. Read CityBeat's story to find out what else the president during his Kentucky visit.

Bye, Paul Brown Stadium - Cincinnati Bengals' Jungle Is Now Paycor Stadium
Paul Brown Stadium is no more. On Aug. 9, the Cincinnati Bengals announced that the downtown stadium now is called Paycor Stadium after a  reported bidding battle among several corporations. The naming-rights deal reportedly will stand for 16 years. The move may be a stunner for fans, who have known the stadium only with Paul Brown's name since its erection in 2000. Read CityBeat's story to find out more about the transition.

Pete Rose Doesn't Care About Previous Statutory Rape Allegations
"Charlie Hustle" hit a speed bump when a reporter recently asked about his alleged dalliances with underage girls. Former Cincinnati Reds legend and manager Pete Rose was on hand Aug. 7 when the Philadelphia Phillies honored the 1980 World Series championship team at Citizens Bank Park. Alex Coffey, a reporter who covers the Phillies for the Philadelphia Inquirer, shared on Twitter what her exchange with Rose was like during the media briefings at the game. When asked if he thought his "presence here sends a negative message to women," given the allegations that he had initiated a sexual relationship in 1973 with a girl who was younger than 16 years old, Rose said, “It was 55 years ago, babe.” Read CityBeat's story to learn more about the statutory rape allegations against Rose. Name for Bibi's Hippo Baby Down to Two Options — and Fans Can Pick Their Favorite
The Cincinnati Zoo has a new baby hippo, and fans now have the chance to help name the cutest addition to the zoo's family. Of course, because the baby is famous Fiona’s little brother (he even has her signature ear wiggles), the name has to start with an F. The two options to choose from are Fritz and Ferguson, and we’re already thinking of good nicknames, – like “Fritzy” or “Fergie," perhaps? Read CityBeat's story to learn how to cast your vote to name Fiona's little brother.