The team's study suggests noise won't be a significant issue for performances at Music Hall — the opposite of the conclusion reached by a report commissioned by the Cincinnati Arts Association. 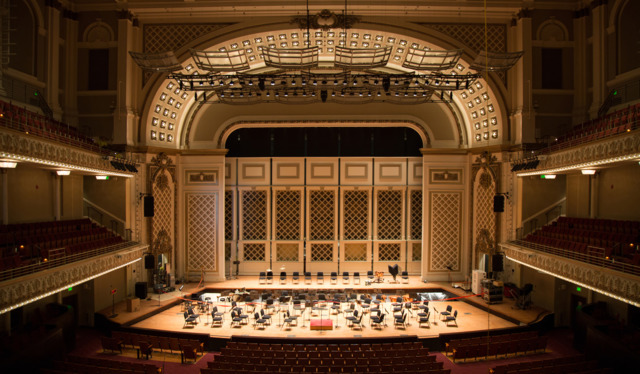 FC Cincinnati yesterday released a noise study it commissioned from acoustic consultants Arup suggesting that noise the team’s 26,000 coming stadium in the West End won’t have any significant impact on concerts and rehearsals by the Cincinnati Symphony Orchestra, Cincinnati Pops and other performing arts groups in Music Hall just across Central Parkway.

But there are dueling conclusions — a study from another consultant called Akustiks commissioned by the Cincinnati Arts Association, which represents the CSO, Pops, the Cincinnati Ballet, Cincinnati Opera and May Festival made the opposite case. The final version of that study was released April 15.

The Akustiks study suggests that the low-end beat from amplified music at the stadium and peak crowd noises would be heard inside Music Hall, possibly disrupting concerts by the CSO and Pops in the venue's main Springer Auditorium. The study also said that noise mitigation structures shown in FC Cincinnati’s stadium plans were likely insufficient.

Plans show the stadium with a canopy over seating areas, but also an opening at the top of the canopy and openings in the stadium’s upper exterior. The team says the canopy will mitigate noise, but Akustiks says the openings will allow significant sound to escape.

“It is clear that mitigation will be required to address the impacts revealed in the FC Cincinnati Stadium noise impact study,” the study reads, suggesting closing openings along the stadium’s exterior and fortifying Music Hall’s roof with gypsum board. “Successful implementation of these measures should allow both Music Hall and the new FC Cincinnati to coexist in the West End.”

The team’s study, meanwhile, says that the noise will not be an issue. It uses noise data from the United Kingdom’s Premier Soccer League to reach those conclusions.

“At the distance between Music Hall and the new MLS stadium, the crowd noise will be a neutral ‘broadband’ environmental sound like high wind or moving traffic,” the study reads. “Broadband noise is less disruptive than tonal sound, such as a siren. Arup conducted a weeklong sound study at Music Hall and found that in the urban environment around Music Hall there are sounds like sirens that are louder, occur more often and have a longer duration than the peak crowd noise levels predicted by Akustiks.”

Questions about noise impacts emerged in February after a preliminary version of the Akustiks report was released as the Cincinnati Planning Commission and Cincinnati City Council mulled key zoning approvals necessary for FC Cincinnati to build the stadium. Council granted those approvals.

Just before council approved the zone change, FC Cincinnati, the city, the Cincinnati Arts Association and the performing arts groups entered into an agreement to work in good faith toward a satisfactory conclusion to the noise concerns. The groups also agreed to work on scheduling to minimize times when both games and performances are occurring simultaneously.

FC Cincinnati is playing at Nippert Stadium until 2021, but if it were already in the West End, it has three games that could conflict with performances at Music Hall. There are still more votes to come. The Planning Commission and Council must also OK the inclusion of two alleys added to the team’s plans recently. The Cincinnati Planning Commission must also approve a final design plan from the team eventually.

The team says it is considering changes to the stadium’s exterior design that could do more to mitigate sound issues.

"The Arup report is an important step in fulfilling our commitment to work with the Arts Organizations and Music Hall with respect to their concerns regarding sound during any matches that may occur at the same time as performances at Music Hall,” FC Cincinnati President and General Manager Jeff Berding said in a statement. “Based on this report we believe sound conflicts can be mitigated effectively. We continue to work with representatives of Music Hall in an effort to address their concerns and fulfill our commitment to be a good neighbor.”

The CAA, however, isn’t convinced yet. The group said it is reviewing the team’s study, but suggested that it “minimizes” noise concerns.

“It is not wise or prudent to take a chance that sound will not be an issue," a statement from the arts group said. "Why wait until the FCC stadium is built and under operation to re-evaluate the issue? The time to implement solutions is now."