With big money and a big fanbase, FCC could join MLS if they can pick a stadium location 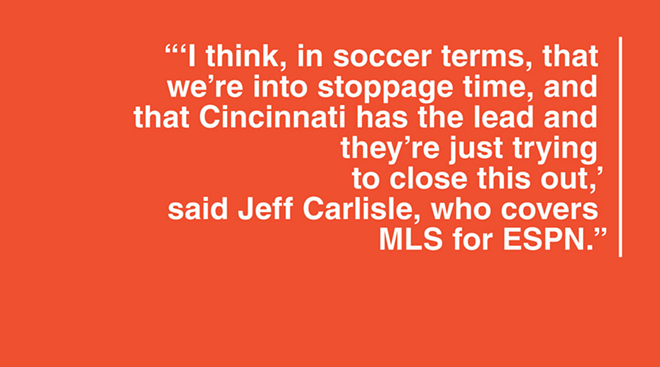 Jeff Berding didn’t want to talk about it. And after talking to a few other people who ought to know something, I think I understand why.

Outside the current kerfuffle over FC Cincinnati stadium plans, I texted the club’s GM seeking an updated handicap on the issue that could make all stadium plans moot: the race against Sacramento for the one remaining expansion berth on Major League Soccer’s current to-do list.

Though even more expansion is envisioned down the road — MLS teams may someday outnumber Dollar General stores, it seems — the city that fails to nail this chance is stuck for an indefinite number of years, trying to stay excited about the second-tier United Soccer League.

But Berding politely declined to discuss the bid, suggesting that if I needed an FCC-related column, he’d get me an interview with the head coach about the team’s upcoming USL campaign.

Thanks, Jeff, but … zzzzzzzzz. It’s MLS- or-bust for this futbol fan.

I can put up only so much longer with the USL life — hosting Rochester and Bethlehem and reminding myself how to find Channel 64 for road games that show other franchises with perhaps 400 in the stands. I can do more USL only if there’s assurance that after a couple more seasons — in 2020 is the thinking — FCC can graduate into the big league and join the Reds and Bengals as teams that bring our city a true major league vibe.

But it’s OK that Berding declined an audience on all that’s at stake. After acquiring the takes of three national MLS writers — journalists who follow this for a living but have no regional self-interest — I take Berding’s silence as evidence he believes FCC’s chances to be good as a penalty shot. Thus, the entirely understandable position that talking about it now could far more easily foul it up than help.

My soccer panel voted 3-0 that Cincinnati is positioned to beat out Sacramento, as well as a flagging Detroit bid that’s officially still in the running but not thought to be truly viable for this round.

Also, the panel’s consensus is that MLS remains desirous of awarding the franchise before March 3, when the 2018 season begins.

So we’re talking only four to five weeks? Get ready to party, folks.

Jeff Carlisle, who covers MLS for ESPN, puts it this way: “I think, in soccer terms, that we’re into stoppage time, and that Cincinnati has the lead and they’re just trying to close this out.”

Steven Goff, of The Washington Post, says: “My hunch is that Cincinnati is the next team to go in. I was a little surprised that they only named one team in December, and that Nashville was the one, not Cincinnati.”

And from Brian Straus of SI.com: “Cincinnati seems to have the edge. There was a time when that edge seemed to belong to Sacramento, but I think that has changed.”

And why has that changed? Why has Sacramento stumbled despite being seen not so long ago as the perfect MLS pursuer? The California capital has a long history of courting the league, a Top 20 TV market, a shovel-ready stadium plan and a fine fan base.

But it’s the money, in the end. Stable money, lots of it, and where it is and isn’t. Cincinnati’s ownership group is headlined by Carl Lindner III — ’nough said — while Sacramento’s bid has been hurt by the pullout of Meg Whitman, the very rich eBay and Hewlett-Packard mogul.

“One thing that has become apparent in this process is how much more important deep pockets have become,” Carlisle said. “Not that it hasn’t always been the case, but now you’re talking about a $150 million expansion fee and a $200 million investment in a stadium, you need to have billionaires with a capital ‘B.’ Money will never be an issue with Carl Lindner, and as the cost of this whole thing began to go up, some fragility within the Sacramento ownership structure has been exposed.”

“MLS loves big money,” said Goff. “Detroit has big money (led by billionaire NBA moguls Dan Gilbert and Tom Gores), and it’s a huge market that will probably get in at some point. But their proposal of using Ford Field (home of the NFL Lions) instead of building a stadium has put the brakes on their momentum.”

And in addition to Lindner and his family, the Cincinnati investor group includes Scott Farmer and the family-run Cintas empire.

Cincinnati also has a fan base that immediately became the largest in the USL, well ahead even of Sacramento’s strong support, and our town’s stadium situation has for some time seemed close to being resolved.

But “close” doesn’t mean “done” — like Sacramento’s stadium deal is done — and therein lies the one caveat Carlisle would pose to hungry FCC fans.

“The ownership is so solid, and they only have to get the stadium situation sorted out, but it seems like an odd way they’re going about it,” Carlisle said. “Someone in their group, or someone in MLS, may not be that thrilled with the Oakley site. Maybe it’s whether that really qualifies as the ‘urban core’ MLS is looking for.”

Indeed, though FCC’s official bid lists Oakley as its stadium site, news came out recently of FCC getting its ducks in a row for a possible land purchase in the West End, near Taft High School and just a few blocks from the millennial-packed Washington Park area.

“But MLS is not going to give them the team until they have everything figured out,” Carlisle said, “and what this does in my mind is to give Sacramento an opening to find that investor who can put them over the top.

“It just seems to me like Cincinnati is better off making a decision — ‘This is where it needs to be; let’s just do this’ — rather than hemming and hawing. I still expect Cincinnati to get it; it’s their game to lose at this point, but if nothing happens in a couple months, I think it could be a time to get worried.”

Personally, I like the West End. The Enquirer recently ran a photo showing Taft High’s soccer field with the downtown skyline looming large in the background, and it spoke to me of “soccer in the city.” But gaining necessary neighborhood support for the plan looks dicey at best.

I’m not a big fan of Newport, Ky. It may be as physically close to downtown as the West End but, sorry, you cross that big river and the city ambience takes a dip. Oakley would be my No. 2, not in the core but still in the city, and with vibrant hipster base.

But I’m with Carlisle. Let’s pick a darn spot, lest Sacramento score a tying goal in stoppage time and then beat us in a shootout.