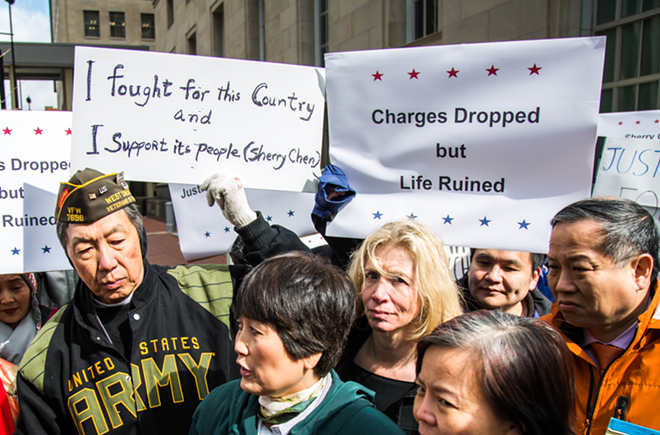 Practically overnight, Sherry Chen went from being an award-winning National Weather Service expert on predicting floods to suspected Chinese spy. Her indictment on espionage-related charges in 2014 thrust the Wilmington resident into widespread notoriety as a low-level likeness of Edward Snowden and Chelsea Manning. Then, just as suddenly, the government dropped the charges without saying why.

That was last March. But Chen’s trip into the Matrix didn’t end there. Although exonerated of criminal conduct, Chen was notified by the National Weather Service that she had been fired. She collected unemployment checks as long as she could. Today she’s out of work, deep in legal debt.

For all the misery that her former employer put her through, Chen wants to be reinstated. Last year she filed an appeal of her firing and a race discrimination claim. An administrative judge for the U.S. Merit Systems Protection Board was scheduled to wrap-up a two-day hearing in Cincinnati on March 15 to decide the merits of her case.

“We’re hoping to get her job back,” said her lawyer Steve Simon of Tobias, Torchia & Simon, a Cincinnati firm specializing in employment law. “That’s what she wants, and it’s within the judge’s authority to order her reinstatement.”

Chen’s is a cause watched by many. The National Council of Chinese Americans, the Congressional Asian Pacific American Caucus, the Ohio Chinese American Association and the Greater Cincinnati Chinese Chamber of Commerce, among others, support her. When her hearing commences Tuesday morning at the federal courthouse downtown, supporters will be rallying outside. They invite the public to attend her hearing in Room 305 inside.

“Our focus is to help citizens, especially the Chinese American community, to be aware of their civil rights and, if anything is happening to them, to educate them and to support them in speaking out against the injustice and also to protect their rights,” said Vincent Wang of Columbus, chairman of the Ohio Chinese American Association.

Chen, 61, was born in China, received advanced degrees in hydrology in Beijing and completed her education at the University of Nebraska. She received her U.S. citizenship in 1997 and worked for the Missouri Department of Natural Resources for 12 years. She joined the NWS in Wilmington in 2007. There she became somewhat of a star. Part of her task was to develop a model to forecast water levels for flood prediction and control in the Ohio River basin. The model itself became a model for others in the field. She shared a National Weather Association award for extraordinary accomplishments contributing to operational meteorology.

Chen got in trouble for trying to help a former college classmate in China, who wanted to know how American dams were paid for. She asked a colleague at work for a password to the National Inventory of Dams website. But what she wound up sharing with her Chinese acquaintance was information from publicly accessible websites.

The government saw it differently. In her October 2014 indictment, she was accused of having “intentionally exceeded access to a protected U.S. Government computer database” and thereby “obtained sensitive, restricted and proprietary fields of data concerning critical national dam infrastructures.”

The charges were filed at a time when the Obama administration had great concerns about intelligence breaches from China and other countries. The government took heat for being overzealous in its investigation of Chinese scholars and scientists in the United States.

Chen, who was not made available for an interview, is willing to put that behind her. In her case to the Merit Systems Protection Board, she asks for back pay, reinstatement, compensatory damages, attorneys’ fees and legal costs and interest. A National Weather Service spokeswoman said the agency cannot comment on a pending lawsuit.

Frank Wu, a distinguished professor at the University of California-Hastings College of Law, said it was “shocking” that Chen was fired after the criminal charges were dropped. If she isn’t reinstated, he said, her life would be ruined. He wrote a Huffington Post column on her behalf last year.

“People are watching this case,” Wu said in an email interview from a train in New Jersey. “Chinese immigrants, Chinese Americans, Asian Americans all know what it is like to be stereotyped as ‘the perpetual foreigner’ and are concerned that they will be prosecuted and persecuted.

“To win,” Wu added, “Sherry needs to show she was fired improperly. She does not need to prove racial bias. She is protected by civil service rules, like any other public servant.”

Simon, her lawyer, said reinstatement would be a fitting end to the story.

“She really is a person who loved her job and she’s somebody who was lucky enough to do something for a living that she loved,” he said. “As you’ve read about this forecast model that she developed, she’s just 100 percent committed to it, lived and breathed it and she wants to get back to it.”