For the First Time in 190 Years, Xavier University Will Have a Female President

Colleen M. Hanycz, Ph.D., also will become the first non-clergy person to lead the Jesuit, Catholic school when she begins the position in July. 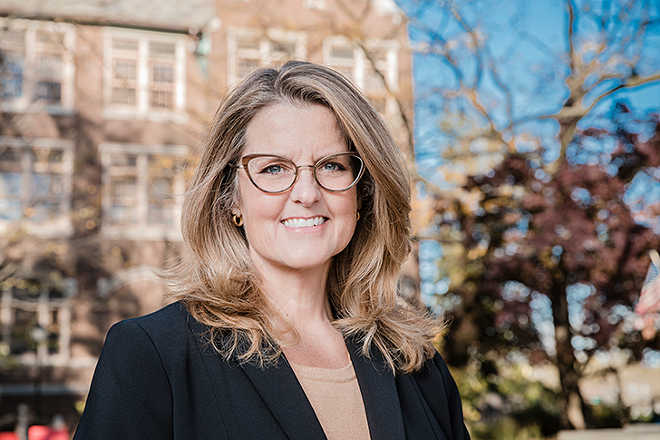 The incoming president of Xavier University will bring a fresh perspective in more ways than one.

At a Jan. 25 media event, Xavier introduced Colleen M. Hanycz, Ph.D., who will become the university’s highest-ranking official on July 1.

When Hanycz begins her tenure, she will become Xavier’s first female president in the school’s 190-year history. She also will become the first non-clergy person to lead the Jesuit, Catholic institution, says Vince Caponi, chairman of Xavier’s board of trustees, in a letter to the university community.

Caponi says that Hanycz also was the first woman and lay president of La Salle University in Philadelphia, where she has served since 2015.

A press release from Xavier states that of the other 26 Jesuit, Catholic universities in the United States, 15 currently have lay presidents and three have female presidents.

“Xavier’s lived mission is deeply appealing to me,” Hanycz says in the press release. “As a Jesuit, Catholic university committed to serving society by forming students intellectually, morally and spiritually for lives of solidarity and service, Xavier’s values strongly align with my own.”

Hanycz will be the Cincinnati-based university's 35th president. Michael J. Graham, S.J, Xavier’s current leader, will retire this summer after spending 20 years in the top position, the longest of any Xavier president.

Hanycz earned a bachelor’s degree in history from St. Michael’s College in Toronto, a bachelor of laws (JD) from Dalhousie University in Nova Scotia, and a master of laws (LL.M.) and doctor of philosophy in law (Ph.D.) from Osgoode Hall Law School in Toronto.

“Xavier is a school on the move. It has benefited from tremendous leadership, great colleagues and a highly engaged student body, all of which are supported by a passionate alumni community in a strong region,” Hanycz says on the university’s website. “When these elements converge around a mission to make the world better, the possibilities are endless.”