Opponents of the bill argue that it threatens the First Amendment rights of Ohioans. 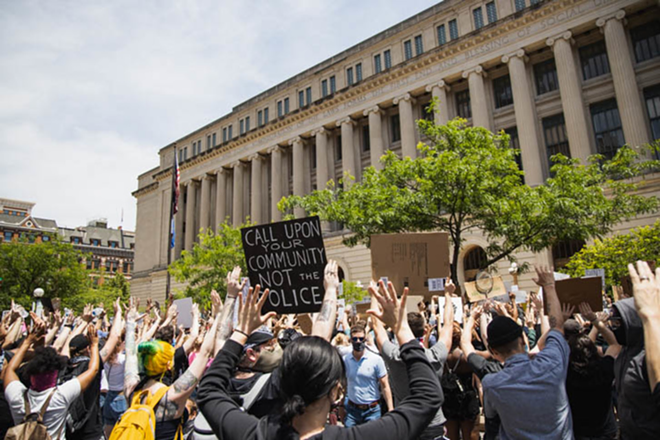 A bill currently making its way through the Ohio legislature could increase the penalties for people arrested while protesting in the state.

Ohio House Bill 109 would create three new felony charges of "riot assault," "riot vandalism" and "bias motivated intimidation." These charges are fifth-degree felonies, and can be raised up to third-degree felonies if the alleged assault results in the injury of a law enforcement officer.

The first two charges would intensify the penalties for offenses like rioting and disorderly conduct. "Bias motivated intimidation," a new charge, would make it a felony to cause harm to a person or their property because of their status as a first responder.

The legislation is one of several bills written as a response to protests that occurred during the summer of 2020. It has seen significant partisan support from Ohio's Republican State Representatives after it was introduced by primary sponsors Rep. Sarah Carruthers (R-Hamilton) and Rep. Cindy Abrams (R-Harrison) in February.

"As a former Cincinnati Police officer, this bill hits close to home," Representative Abrams said via email. In 2001, she served as a member of a 15-officer response team that responded to civil unrest.

"The violent actions of a few bad actors place everyone at risk - peaceful protesters, community members, and law enforcement," Abrams wrote. "HB 109 ensures that the individuals seeking to harm others during these mass gatherings are held accountable."

Opponents of the bill argue that it threatens the First Amendment rights of Ohioans. Gary Daniels, chief lobbyist for the ACLU of Ohio, says organizations that plan or promote protests and demonstrations could be at risk.

If violence breaks out at any level during a protest, the organization that promoted or planned the event could be in violation of HB 109 and Ohio's corrupt activity laws, which involve the engagement or attempted engagement in conduct defined as "racketeering activity."

"All the years that I've been doing this work, I haven't seen a bill as bad as this with regard to free speech rights," Daniels said.

Ohio is currently in the second year of its two-year legislative session, which will end in December 2022. House Bill 109 passed in Ohio's House of Representatives and is waiting on a decision from the Senate. If the Senate approves the bill, it will go to Gov. Mike DeWine for a signature or veto.

The legislature will adjourn for recess during the beginning of June and will reconvene in November.

Ohio Protest Bill: Anti-Civil Disorder or Anti-Civil Rights?: An Ohio bill dubbed by opponents as "anti-free speech" is up for a possible vote.


"I am working with my colleagues in the Ohio Senate and across the aisle to pass this bill and have high hopes HB 109 will be signed into law by the end of the year," Abrams said via email.

Ohio defines a riot as a group of four or more people who gather and violate disorderly conduct codes, intending to commit a misdemeanor or prevent a public official from doing their job.

Organizations like the ACLU of Ohio are concerned of what the passing of HB 109 will mean for future protests and the right for Ohioans to assemble for causes they care about.

"I think the result for an awful lot of people is they are just going to simply stop speaking, stop participating, stop planning, stop demonstrating," Daniels said.

This story originally was published by Public News Service and is republished here with permission.