The embattled former judge will be released after completing a county-approved work detail that involved ministering to other inmates at the Hamilton County Justice Center. 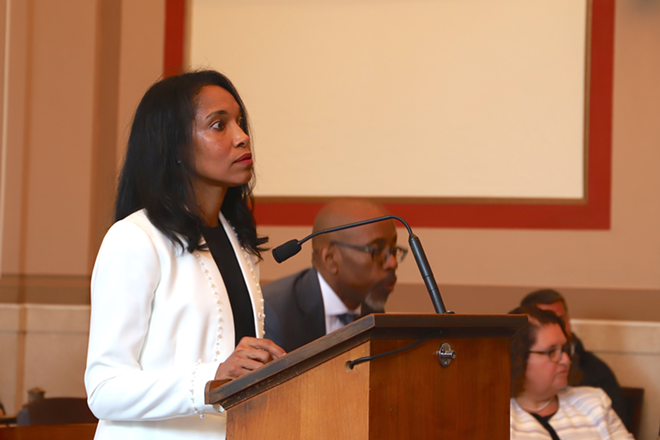 Thsi Saturday, a little more than two months after former Hamilton County Juvenile Court Judge Tracie Hunter began serving a six-month sentence related to her conviction on a felony count, she will be released from the county justice center.

Hunter was convicted in 2014 on one of nine felony counts for providing documents to her brother, a juvenile court employee in the process of losing his job. Hunter appealed that conviction for years. During her final hearing this July, tensions boiled over and her supporters angrily shouted at court personnel and Hamilton County Judge Patrick Dinkelacker as Hunter was dragged, limp, from the courtroom.

The former judge, also a pastor at Western Hills Brethren in Christ Church, received three days credit for each day she has served because she has been ministering to other inmates, jail officials say. In all, Hunter will have spent roughly 75 days in jail.

"After my review of her participation in a court authorized work detail program, I have concluded that Tracie Hunter began the required service on August 12, 2019," Hamilton County Sheriff Jim Neil said in a statement. "Therefore, using the criteria within our policy to apply credit to her sentence, my staff determined that an earlier release date was appropriate."

She ran for juvenile court judge in 2010, promising to combat racial disparities in the juvenile system. Initially, her opponent, Republican John Williams, was declared the winner. But Hunter sued because some votes were not counted. When they were, Hunter came out victorious by a slim margin.

"She entered the court under a great cloud of opposition," civil rights activist Bishop Bobby Hilton said after her July 22 sentencing. "It's been a major political fight since day one."

Hunter made changes to the juvenile court, including ordering young defendants taken out of shackles. Her supporters say those changes and the tense electoral battle are behind what happened next. In 2014, Hunter was indicted on nine felony accusations. Jurors couldn't agree on eight of those counts but did convict Hunter on one. After the trial, three jurors indicated they wished to change their votes to not guilty, but a motion for a retrial was denied.

Hunter was able to stay out of jail as her case went through a long, winding series of appeals in state courts and, eventually, the U.S. Sixth Circuit Court of Appeals. But in May, federal District Court Judge Timothy Black upheld Hunter's sentence after three years presiding over the case. That opened the door to Hunter's incarceration.

Time won't be her only penalty: She'll also have to pay $34,000 in court costs related to the case, according to documents from the courts.

The former judge's supporters have protested her jail stay, rallying outside the home of Judge Dinkelacker. Local Democrats have also decried her sentence.

"A grave injustice occurred Monday in the Hamilton County Courthouse as the sentence imposed upon former Hamilton County Juvenile Court Judge Tracie Hunter leaves many questioning fairness of the local justice system," read a statement released after her jailing in July signed by Commission President Denise Driehaus, Vice President Stephanie Summerow Dumas and commission member Todd Portune, all Democrats. "Dragging her into a cell in the Hamilton County Justice Center when she is neither dangerous nor violent is unjust and serves as a further example of the need for criminal justice reform in our local courthouse."

Hunter's critics, however, say she broke the law in providing her brother with confidential documents related to an inmate he says he struck in self-defense, and that she needed to be punished accordingly.