Got a Clever, Catchy Slogan About Highway Driver Safety? ODOT Wants Your Ideas

The Ohio Department of Transportation has put out the call to find the next "Click it or ticket" or "Stay Alive. Don't Drink and Drive" 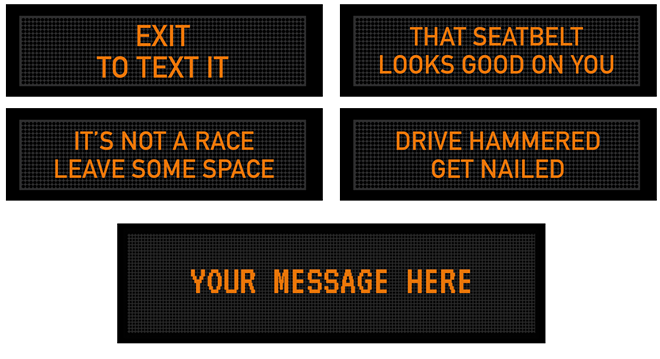 Twice a year, the committee that chooses highway sign messages that reflect federal campaigns — don't text and drive, don't drink and drive, slow down, etc. — meets and bandies about clever (?), (sometimes) funny and hopefully effective suggestions that end up on the 130 message boards around the state of Ohio.

“We try to be creative but not so creative that people feel like they have to get out their phones and take a picture,” ODOT press secretary Matt Bruning told WLWT last year. “We sit around and brainstorm, kick ideas off each other,” said Bruning. “Some we throw out and laugh and say that will never fly…It’s a lot of fun.”

You have probably noticed some of their work in recent years and over this past Thanksgiving weekend (which saw six traffic deaths on highways, incidentally), and now ODOT is throwing open the doors to help craft their December holiday messages.

The holidays are just around the corner which means Ohioans will be traveling all across #OH. Give us your best travel safety message themed around the holiday season! The winning entry will run on over 130 freeway message boards! Submit your idea here: https://t.co/JAl5haIM45 pic.twitter.com/BlWY9LYjg7


You can enter your submissions here, with the following guidelines:

"Due to the size of the signs, your submission has a character limit. A highway message can’t be longer than 51 characters (17 characters for each of the three lines). Messages must be traffic safety related. Get bonus points if your submission focuses on one of Ohio's emphasis areas (Serious Crash Types, High Risk Drivers and Behaviors, and Special Vehicles and Roadway Users) Your submission will be disqualified if it is defamatory, infringing, obscene, indecent, harassing, bullying, threatening or unlawful."

Unfortunately that means suggestions like "Call your state reps and tell them you want more state funding for public transit" or "Never drive" aren't going to fly, but it doesn't hurt to try.

This article first appeared at clevescene.com.