“Today’s COVID report is grim. It's grim because it shows that we are not just continuing in our third escalation, but this one is probably now the second most worrisome escalation we have seen — surpassed only by that original March increase." 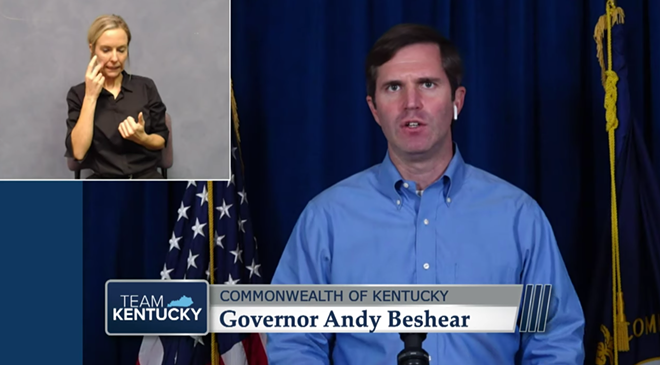 Gov. Andy Beshear said during Tuesday's press briefing that Kentucky is making surge preparations in anticipation of a dramatic increase in COVID cases over the fall and winter — something the state didn't have to do over summer's uptick.

“Today’s COVID report is grim. It's grim because it shows that we are not just continuing in our third escalation, but this one is probably now the second most worrisome escalation we have seen — surpassed only by that original March increase,” he said, referring to it a "second wave."

He made his address from the governor's mansion, where he and his family are still in quarantine after having sustained contact with someone who tested positive for the virus; the First Family tested negative again for COVID on Tuesday.

Beshear ticked off what the state is doing to prepare, including looking at hospital capacity and reviewing hotels, presumably for patient overflow. They are also looking at state parks and putting plans in place to set up a field hospital if necessary. He also noted the state has a 120-day supply of PPE, hospitals should all have a two-week supply of PPE and there is enough testing capability.

"We are seeing virtually all of our numbers escalating at the same time, which tells us it's real, and it tells us it could surge in a way that is requiring us to make preparations as a state, and should require all of us as citizens to double down on our efforts," he said. "Let's not wait until this gets worse than it is right now."

As of 4 p.m. Oct. 20, the state reported 1,312 new cases over the past 24 hours — Kentucky's fourth highest daily total and the highest Tuesday ever — 16 new deaths and a positivity rate of 5.08%. There are currently 776 Kentuckians in the hospital for COVID and 202 in the ICU. This is the first time the state has had a positivity rate over 5% since Aug. 25.

Locally, NKY Health reported that 61 of those new daily COVID cases were located in Northern Kentucky.

Statewide, more than 17,400 people have recovered.

"If what we are seeing nationally continues, it is really concerning because this time around it isn't just in the South, or isn't just in a pocket in the Midwest, it's everywhere," Beshear said. "We've stopped at least two before, we can stop this (wave)."

He noted that COVID spread was being seen at weddings and funerals and asked venues, of all types, to take their safety precautions seriously.

"If we can’t get everybody’s buy in and we can’t get more people doing the right thing each and every day, my concern is that we're going to experience a real surge that we must avoid,” he said.

"Yes, we're going to be out there doing enforcement, but we're never going to have enough people out there to get truly the amount of people doing the right things we need. So I'm asking you, I'm pleading with you, I'm begging you, follow the rules. Other people's lives, the economy and the education of our kids depend on it."