Gov. DeWine Can’t Say When Most Ohioans Can Expect to be Vaccinated

Six weeks after the start of vaccinations in Ohio, fewer than 1 million of the state's 11.7 million residents — or 8% — have received a first dose. 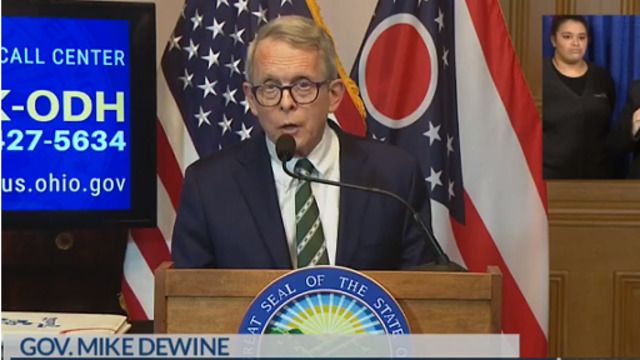 Photo: The Ohio Channel
Gov. Mike DeWine
The pace of coronavirus vaccinations is accelerating in Ohio, but Gov. Mike DeWine on Thursday said it was still too early to say when non-priority Ohioans can expect to get a shot in the arm.

There was good news on the vaccine front, DeWine said during one of his regular coronavirus press conferences.

The state is now getting almost 150,000 doses a week — up from about 100,000 a few weeks ago. Also, one of the two companies supplying the vaccine — Pfizer — is saying it will increase its national production 40% by mid-February and possibly double it by March.

In addition to that, a vaccine made by Johnson & Johnson could receive regulatory approval by the end of the month, adding millions more doses to the pipeline.

But six weeks after the start of vaccinations in Ohio, fewer than 1 million of Ohio’s 11.7 million residents — or 8% — have received a first dose, according to the state’s vaccination dashboard.

At the same time, the state is only beginning to work its way through Phase 1B of the vaccination plan. That group of 2.2 million includes the elderly, people with severe disabilities and adults who work in schools.

Ohioans over 65 will be eligible for vaccines starting Monday, but state health officials don’t know when supplies will be adequate to give them one.

When DeWine was asked to give his best guess of when the average, non-priority Ohioans could expect a vaccine, DeWine said he couldn’t.

“I wish we had enough to open up the Ohio State stadium and other large venues and vaccinate 24-7,” he said.

DeWine later said that only about a third of the state’s ability to administer the vaccine is currently being used.

“So we really have the capacity to blow it up,” he said. “We don’t really have a problem getting this stuff out; we have problems getting it in.”

In addition to more vaccines making their way into the Buckeye State, DeWine announced some other good coronavirus news on Thursday.

If the number of hospitalizations stays below 2,500 through next Thursday, DeWine said he would remove the 11 p.m.- 5 a.m. statewide curfew.