Grab a Fork and Raise a Glass

Local breweries and eateries serve up trendy takes on pairing 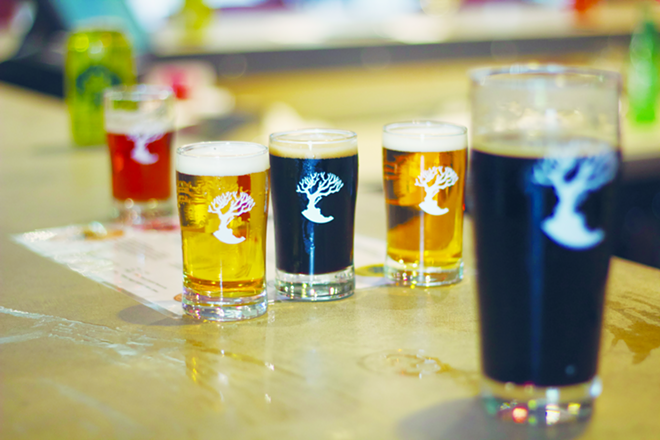 With Ohio brewing more than 980,000 barrels of craft beer in the past year — the fourth largest amount in the country — and breaking records with America’s largest Oktoberfest, it’s no secret that Cincinnatians love a good brew. And these days, with the complexity of craft beers (especially from our local brewers) becoming on par with artisan wines, it’s not hard to find a range of drinks to pair with dinner.

So Queen City beer lovers, raise a glass. Local restaurants and breweries are teaming up to dish out new ways to enjoy a cold one with food that complements your beverage of choice.

BrewRiver’s house beers are all brewed at Cincinnati’s very own Triple Digit/Listermann Brewing Company — which was named the 2013 Ohio brewery of the year — so it’s fitting that the gastropub offers suggested beer pairings for each of its dishes.

Chef Michael Shields, who has been home-brewing since the ’90s, says he either pairs beers that are complementary to the dish, or goes the opposite and chooses something contrasting. He chooses a brew to go with every dish he cooks up — right down to his homemade brownies, which are made with Stone Brewing Co.’s Arrogant Bastard Ale, then paired with Listermann’s contrasting Leopold, a Belgian blonde.

For Fifty West, the four virtues of “tradition, innovation, craftsmanship and patience” written on their brewery wall ring true not just in their beer, but in their food, too. Instead of focusing on brewing a small variety of beers to distribute to local bars, the brewery decided to focus on creating a taproom with tapas-style seasonal food pairings.

“Our chef, John Tomain, works incredibly hard to make sure the items he puts out of the kitchen pair hand-in-hand with the different beers on tap,” says co-owner Bobby Slattery. “He firmly believes pairing beer with food deserves more attention, and the feedback from our customers seems to indicate John knows what he’s talking about.”

With 10-16 beers on tap at any given time, the brewery boys can help you pick something to pair perfectly with your meal, which includes rotating seasonal dishes like smoked barbecue pork shoulder for fall.

Oakley’s Maribelle’s eat + drink and MadTee Brewing teamed up after the MadTree-ers became regulars at the restaurant. “The brewers of MadTree had been guests of Maribelle’s before they had officially opened the brewery and taproom, so we had heard about their plans,” Maribelle’s owner Leigh Enderle says. “We consider their beer to be as local as we can get. They’re only 1.2 miles from Maribelle’s. We love their beer and vibe.”

Not only does Maribelle’s offer the beer in the restaurant (with burger and beer specials on certain nights featuring a MadTree brew and a Maribelle’s burger for $12), they have also been serving up food in MadTree’s taproom. “We feel that this is a perfect example of two local, independently owned businesses helping to support each other’s endeavors,” Enderle says.

Maribelle’s chef Mike Florea even works with MadTree to help them source ingredients for some of their beers including the recently released FLOlsch, a kolsch with ginger, lime and ancho chili.