“Behind every plate of schnitzel or paprikash is a once-living, sensitive individual who was crammed onto a truck for a terrifying, miserable journey to their death." 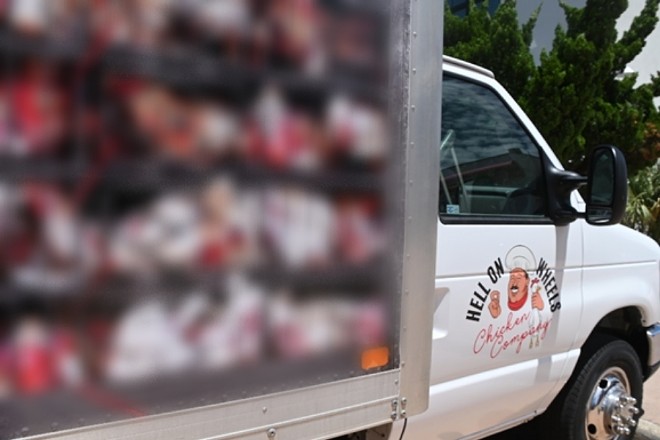 Photo: provided by PETA
The "Hell on Wheels" truck is coming to Oktoberfest Zinzinnati.
**Note: blurred for graphic content**

Animal rights group PETA is known for its unique stunts, and this weekend they’re planning on bringing quite the show to Oktoberfest Zinzinnati.

“Hell on Wheels,” is described by PETA as a new guerilla-marketing campaign “featuring a life-size chicken transport truck covered with images of real chickens crammed into crates on their way to a slaughterhouse.”

This truck, covered in bloody images of birds, will also be playing “recorded sounds of the birds’ cries and a subliminal message every 10 seconds suggesting that people go vegan.”

“Behind every plate of schnitzel or paprikash is a once-living, sensitive individual who was crammed onto a truck for a terrifying, miserable journey to their death,” PETA’s EVP Tracy Reiman said in a release. “PETA’s ‘Hell on Wheels’ truck is an appeal to anyone who eats chicken to remember that the meat industry is cruel to birds and that the kindest meal is a vegan one.”

The “Hell on Wheels” truck will be stopping by the festival from 10 a.m. to 6 p.m. Sept. 16-18. This campaign is part of a tour that will also be stopping in places like the Taste of Buffalo, Nashville’s Hot Chicken Music Festival, the Chicago Food Festival the Memphis Chicken & Beer Festival, the Michigan Chicken Wing Festival and more.

Oktoberfest Zinzinnati not only features birds to eat but the world’s largest chicken dance, which this year is led by the cast of Hamilton the musical. The dance kicks off at 5:30 p.m. Sept. 17 at the Turfway Park Main Stage at Second and Elm Streets.