The open-water swim across the Ohio River was canceled due to a blue-green algae bloom, which can produce harmful levels of toxins 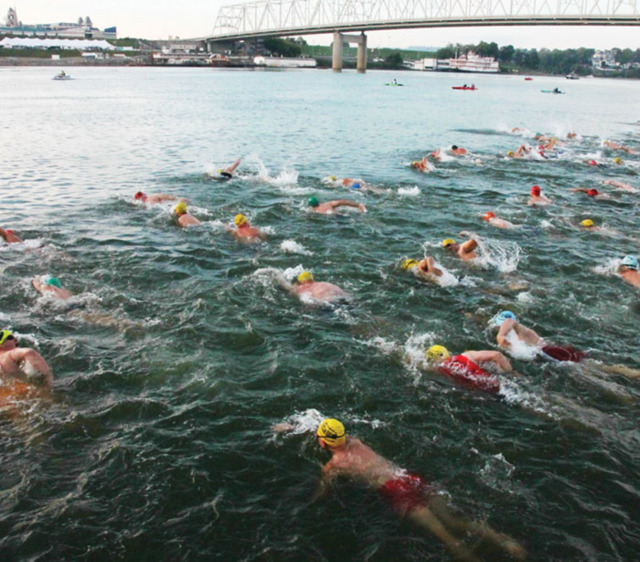 The Great Ohio River Swim — an open-water swim which invites people to cross the Ohio River from the Serpentine Wall to Kentucky and back — has been canceled due to what organizers say is a "harmful algal bloom" in the Ohio River.

The swim was postponed from its original date in September because of the bloom and, according to the website, "levels of harmful algae have continued to increase. Working with the agencies responsible for water quality testing and analysis, we have determined that the river will not be safe for our event on October 13."

So what's so harmful about blue-green algae? According to the Ohio Environmental Protection Agency, "A harmful algal bloom (HAB) is a large growth of bacteria that can produce toxins. These toxins may affect the liver, nervous system and/or skin" and "if you touch HABs, swallow water with HAB toxins or breathe in water droplets, you could get a rash, have an allergic reaction, get a stomach ache, or feel dizzy or light-headed. HABs also are toxic to pets."

In late September, Hamilton County Public Health issued public health advisory about the potential for a blue-green algae bloom in the Ohio River, urging caution and recommending pregnant and nursing women, children, those with pre-existing medical conditions and pets avoid swimming or wading in the water.

According to Hamilton County Public Health, "A recreational advisory is issued if the toxins reach a level between six and 20 parts per billion." At the end of September, samples taken by the Ohio River Valley Sanitation Commission (ORSANCO) at multiple places along the Ohio River had shown toxins at those levels.

“This type of algae is always present in the river water,” stated Tim Ingram, Hamilton County Health Commissioner, in the advisory. “But, if the weather conditions are right, the algae can spread rapidly, causing a bloom.”

Greater Cincinnati Water Works and the Cincinnati Health Department have released a statement saying that the algal bloom does not affect drinking water.

GCWW ensures that drinking water is safe, and CHD is urging residents to use caution when swimming or conducting other recreational water activities in the Ohio River until more is known about the HAB.

What is a Harmful Algal Bloom (HAB)?

HABs are made up of blue-green algae, also known as Cyanobacteria, photosynthetic bacteria, and "pond scum." It is most often blue-green in color, but can also be blue, green, reddish-purple or brown. Blue-green algae generally grow in lakes, ponds, and slow-moving streams.

Contact with HABs can cause skin and eye irritation, stomach cramps, diarrhea, vomiting, headache, fever, muscle weakness, or difficulty breathing. Because it is not always visible, CHD strongly advises people to bathe immediately, if they think they’ve come in contact with the substance. Anyone who may be experiencing symptoms related to exposure to algae should contact their health care provider, especially if they have been in contact with Ohio River water.

No Impact on Water Quality

Water quality monitoring by GCWW confirm that treatment processes are very effective in addressing this issue, and algal toxins have not been detected in the finished water. GCWW continues to test and monitor river conditions to ensure that the HAB is not impacting the quality of drinking water. The safety of drinking water is GCWW’s highest priority. GCWW has always met or exceeded all the state and federal health standards for drinking water.

The organizers of the Great Ohio River Swim are inviting current swim ticket holders to attend the event in 2020 and are "considering earlier scheduling options" to ensure a more successful swim. If you want a refund for the swim, email [email protected] by Oct. 31.