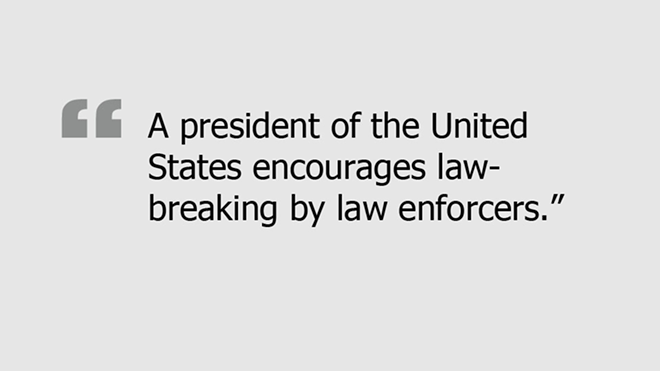 Since January, we have had our first grifter presidency.

Sure, you might argue that Warren Harding came close. But the grifting, though done on a colossal scale, was by his underlings, the “Ohio Gang.” Harding himself probably didn’t benefit. He was too busy foreshadowing a future president’s antics in the oval office.

Grant, too, wasn’t perfect in supervising his minions, but he was not personally corrupt.

But this administration is different. The grifting is from the top down. The grifter-in-chief and his family’s profit-taking is too pervasive to even be news anymore. From violating the emoluments clause, which he’s been doing from the day he was sworn in, to mixing his government and business roles, to his companies being granted favors by foreign governments, the grifting rolls on. But grifters, while thieves, are usually not thugs — think John Cusack, Annette Bening.

Now we also have our first thug presidency. Trump’s speech to a law-enforcement group encouraged roughing-up of suspects. Why guard their heads when putting them into the cruiser? A concussion is fine. Bounce them around a bit. And if someone is killed by not being secured in the paddy wagon, so what?

A president of the United States encourages law-breaking by law enforcers. The same guy who encouraged his supporters to beat up protestors. Every day a new low.

(Trump even appointed a guy with a thuggish name, “Mooch,” but he lasted just a few days.)

A leader supported now by maybe 35 percent of the people. Blaming problems on those “not like us” (immigrants).  Turning more thuggish by the day. Trying to destroy his enemies, who, in his paranoia, are everywhere, including his hand-picked attorney general. Munich on the Potomac.

MARK PAINTER served as a judge for 30 years. He is the author of six books. Contact him: [email protected]