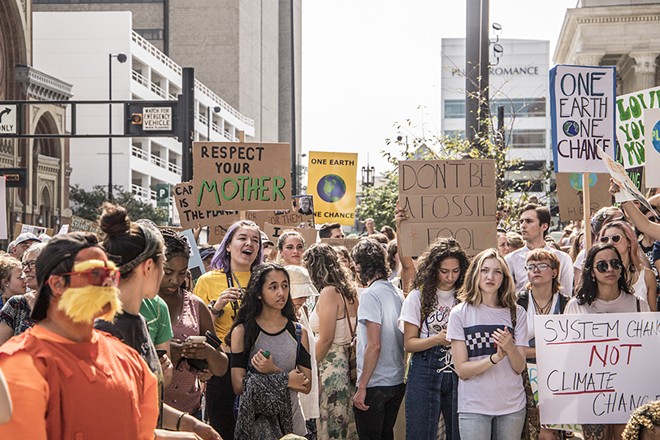 On Sunday, the U.S. Senate passed the Inflation Reduction Act of 2022, a bill that will reduce spending while at the same time offering nearly $370 billion is new initiatives to fight climate change.

While Ohio has many options for mandating clean power and pricing carbon that will reduce carbon emissions, the Inflation Reduction Act takes a different approach, providing a mix of rebates, credits, and grants to reduce carbon emissions and bring the United States closer to the goals set out in the Paris Accords.

Analysis by researchers at Princeton finds the Inflation Reduction Act will push greenhouse gas emissions to less 50% of 2005 levels by 2034, much lower than the projection of the status quo at 73% of 2005 levels but short of the 40% levels needed to reach a “net-zero” emissions goal.

That being said, this is some of the most monumental climate legislation passed in congressional history and large amounts of it are going to go to farmers, manufacturers, and governments in communities across the country, including Ohio, to support the transition to a new energy economy.

Below are some of the provisions in the bill that could bring new clean energy investment into Ohio.

The bill will offer an estimated $30 billion in production tax credits to accelerate U.S. manufacturing of solar panels, wind turbines, batteries, and critical minerals processing. This could lead to more domestic manufacturing in the state of Ohio.

The bill provides $30 billion targeted grant and loan programs for states and electric utilities to accelerate the transition to clean electricity. These could help with purchase of capital and modernization of Ohio’s utilities and state and local governments.

The bill will invest $27 billion in clean energy technology acceleration, which could help deploy technologies to reduce emissions in disadvantaged communities in Ohio.

The bill invests $20 billion in climate-smart agricultural practices. Ohio’s $9 billion agricultural industry could get a substantial boost from investment like this.

The bill allocates up to $20 billion in loans to build new clean vehicle manufacturing facilities across the country. This could help jump start the manufacture of clean vehicles in the state.

It also sets aside $10 billion in investment tax credits to build clean technology manufacturing facilities. These could be used for companies to build new factories in Ohio that make electric vehicles, wind turbines, solar panels, or other new energy economy components.

The bill requires over $9 billion of federal procurement of domestically-manufactured clean technologies to create a stable market for clean products. This could provide a market for manufacturers looking to produce clean tech in Ohio.

It will also provide $9 billion in consumer home energy rebate programs, focused on low-income consumers, to electrify home appliances and for energy-efficient retrofits. This will help low-income people adapt to the new energy economy by reducing the use of energy.

These are just a few provisions of the new bill that could have a big impact on Ohio’s energy sector. Let us hope that if this bill passes the House and is signed by the president, state and local government in Ohio will take advantage of the opportunity to use these resources instead of resist them for petty partisan reasons.