One month prior to casting doubt about the existence of a 10-year-old rape victim forced to travel to Indiana for an abortion, Yost handed down a lenient sentence for a rapist. 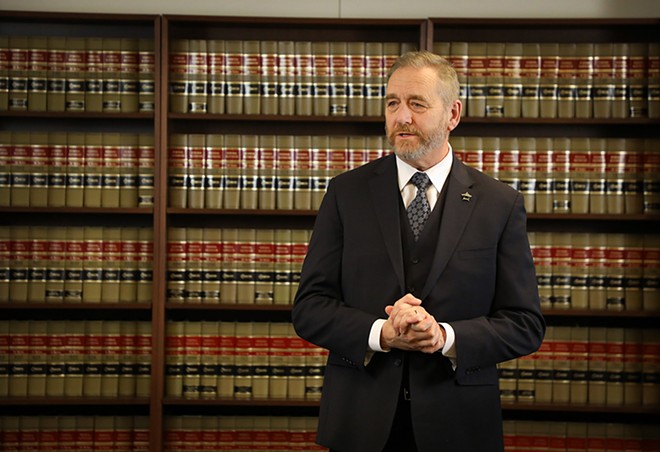 On July 11, Ohio Attorney General Dave Yost made an appearance on Fox News during which he made several questionable statements.

The biggest, of course, were the doubts he was trying to raise about the existence of a 10-year-old rape victim who had to travel to Indiana for an abortion because of a law he rushed to enact. He did so almost immediately after the U.S. Supreme Court overturned Roe v. Wade on June 24.

The doubts Yost was trying to sow were proven to be false just two days later when news broke that Columbus police had arrested a 27-year-old man in the case.

As evidence to support those unfounded doubts, Yost said that the Bureau of Criminal Investigation hadn’t processed a rape exam in such a case. That ignores the fact that the state’s own Child and Adolescent Sexual Abuse Protocol lays out many circumstances under which a child victim wouldn’t have a rape exam, including because the four-to-six hour exam would be unlikely to produce evidence more then 72 hours after an attack took place.

Yost also claimed that under the new Ohio law, protections for the life and health of the mother mean the girl wouldn’t have had to leave the state for an abortion.

But the law itself is silent on what age is too young to require a girl to have a baby. Yost has refused to issue any guidance on the matter. And two OB-GYNs said that while pregnancies with such young mothers are risky, so are a lot of others that don’t meet the requirements for exceptions under Ohio’s new law.

That’s three questionable statements in a three-minute interview. But in addition to those, the state’s top cop implied that Ohio’s law enforcement system wouldn’t fail to mete out tough justice when they learned someone so vulnerable had been raped.

“In Ohio, the rape of a 10-year-old means life in prison,” Yost told Fox host Jesse Watters. “I know our prosecutors and cops in this state. There’s not one of them that wouldn’t be turning over every rock in their jurisdiction if they had the slightest hint that this had occurred there.”

That seems to contrast with Yost’s own conduct less than a month earlier in the alleged rape of another vulnerable person — in this case, a 24-year-old with intellectual disabilities by a man who had already lost his teaching license over accusations of inappropriate conduct.

Not surprisingly, the intellectually disabled are particularly vulnerable to sexual abuse because they can have fewer tools with which to defend themselves, from perhaps not knowing much about sex to maybe not being able to communicate what happened. Women “and girls with intellectual or developmental disabilities are four to 10 times more likely to face sexual assault, with nearly 90% experiencing sexual assault during their lifetime,” reports the Board Resource Center and The Arc’s National Center of Criminal Justice and Disability.

One such case happened just outside of Toledo at the Luther Home of Mercy. Joseph T. Bergman, 68, a van driver for the facility, was charged with two counts of rape and two counts of gross sexual imposition over his conduct toward a 24-year-old resident of the facility.

The Sandusky Register reported that Bergman had a history of inappropriate conduct that caused him to be fired from his teaching job at Benton-Carroll-Salem Schools and to lose his teaching license in 2015. In addition, other women claimed to have been sexually assaulted by him, including while he was still working as a teacher, WTVG reported.

The charges Bergman was facing could have landed him in prison for a decade or longer, which at his age, could have meant the rest of his life.

However, Yost’s office on May 18 agreed to a deal in which Bergman pleaded guilty to one count of gross sexual imposition. He was sentenced to probation and placed on the state’s sex offender registry on July 6.

The Sandusky Register reported that Yost “has a history of refusing to comment or provide any details for controversial decisions he makes regarding sex offenders” and that Yost wouldn’t explain why his office offered Bergman the plea deal or why it said it wouldn’t oppose probation.

And — just as he’s refused to say how young Ohio girls need to be before the law doesn’t force them to have carry pregnancies — Yost’s office also didn’t respond when asked if rape victims with intellectual and developmental disabilities should be required to carry pregnancies from those crimes.