In recent years, Jews of color and non-Ashkenazi Jews have been bringing attention to new Hanukkah traditions that celebrate the diversity of Judaism in the U.S. 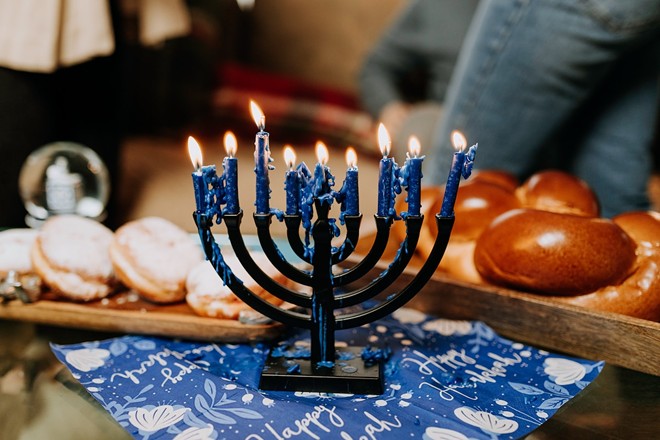 Hanukkah, the Jewish “festival of lights,” commemorates a story of a miracle, when oil meant to last for one day lasted for eight. Jews light the menorah, a candelabra with eight candles – and one “helper” candle, called a shamas – to remember the Hanukkah oil, which kept the Jerusalem temple’s everlasting lamp burning brightly. Each year, the holiday starts with just the shamas and one of the eight candles and ends, on the last night, with the entire menorah lit up.

But because the reason for the light is oil, Jews also celebrate by eating food cooked in oil. In the United States, most people think of those oil-soaked foods as latkes, or potato pancakes, and jelly doughnuts called sufganiyot. For most American Jews, these are indeed important holiday foods, replete with memories – both of their heavy, greasy deliciousness and of the smells that permeate the house for days after a latke fry.

More specifically, though, these treats are Ashkenazi, referring to Jews whose ancestors came from Eastern Europe. Two-thirds of Jews in the U.S. identify as Ashkenazi, which has strongly shaped American Jewish culture. That Eastern European culture, however, is only one of many Jewish cultures around the world.

In recent years, Jews of color and non-Ashkenazi Jews have been bringing attention to new Hanukkah traditions that celebrate the diversity of Judaism in the U.S. My work as a scholar of gender and Jewish studies often looks at how multicultural families navigate and celebrate the many aspects of their identities.

Jews of color come from many places. Some people were born into communities that have always been Jewish and have never been considered white: For instance, there are Jewish communities in India, Ethiopia and China. Others are people of color adopted into white Jewish families; adult converts to Judaism; or children of interracial, interfaith marriage.

Many Jews of color have strong ties to Ashkenazi Judaism. Increasingly, though, they are publicly celebrating the range of traditions they bring to the table, making space for more diversity in mainstream Jewish life. There’s been more conversation about the Ethiopian Jewish holiday Sigd, for example, and what role it might play in American Jewish life.

One of my favorite examples is a children’s book called “The Queen of the Hanukkah Dosas,” which features a boy and his little sister, named Sadie. Their dad is Ashkenazi and their mom is Indian or Indian American, as is their live-in grandmother, Amma-amma. In their house, Hanukkah means cooking up a plate of dosas, South Indian crepes sometimes wrapped around a savory filling. The narrator is annoyed by Sadie’s tendency to climb on things, but her climbing skills save the day, and the dinner, when the family is locked out of their house and she can climb in and open the door.

What I especially appreciate about this particular book is that the dosas are not the point of the story. This is a story about an annoying little sister who in the end saves the day, and her family just happens to make dosas as a Hanukkah treat. “The Queen of the Hanukkah Dosas” doesn’t mention whether the Indian side of the family is Jewish, but either way, its message for kids is clear: It can be totally normal to be a half-white, Jewish, half-Indian kid who has dosas for Hanukkah.

In real life, one of the most influential Jews of color adding distinctive Hanukkah foods to the communal table is Michael Twitty. This acclaimed food historian is author of “The Cooking Gene,” about the social and culinary history of African American food, and “Kosher Soul,” which brings together traditions from these two sides of his identity.

Twitty notes on his blog, Afroculinaria, that “traditionally African Jewish communities – the Beta Yisrael of Ethiopia, the Lemba of Southern Africa, and groups in West Africa, did not celebrate Hannukah.” That said, in the spirit of celebrating Jewish food from around the world, he shared the Somali dish sambusa, a flaky deep-fried pastry something like a samosa, that can be filled with meat or vegetables. As with dosas, it is not so much that these foods are traditionally associated with Hanukkah but that they could provide Black Jews with a way to celebrate African and Jewish aspects of their heritage with a food fried in oil.

Twitty is known for his skill at a wide range of cuisines, including a wide range of Jewish food; cuisine cooked by African Americans for themselves and, at times, white employers; and African foods. Drawing on all these traditions, Twitty created a riff on more traditional latkes: Louisiana-style latkes, which include the “holy trinity” of Creole and Cajun cuisine – garlic, green onions and celery in this recipe – plus a bit of cayenne pepper.

Plenty of people improvise their latke recipes: My former synagogue, like many others, had latke cook-offs in which people brought all sorts of innovations, including black bean and sweet potato latkes and latkes flavored like samosa fillings. For Twitty, pulling from Creole flavors allows him to marry his Jewish religion and his African American heritage – and to offer a path for other Black Jews to do likewise.

In my new book, “The Racism of People Who Love You,” I think a lot about being brown in white spaces and about the innovations that come from blended identities.

I am not from a historically Jewish Indian community, but my own innovation, as a Jew of color, is this. The last Hanukkah before the pandemic, my mom came out to visit me. She is neither Jewish nor Indian but became an excellent Indian cook during many decades of her marriage. I, however, am not an excellent Indian cook and, whenever I am able to spend time with my mom, I want her to make something called aloo puri, which is a chickpea and potato dish served with crispy, puffy fried bread. I have no idea how to make the bread, and it is a “seeing Mommy” treat.

I invited an Indian colleague who was not going home for winter break to join us for dinner. When I happened to mention this dinner to one of my senior Jewish studies colleagues, he commented that he wanted to have my mom cook an Indian dinner for him, and so, with my mom’s permission, I invited him and his husband to join us as well.

My mom looked at me. “Puri are fried in oil,” she said, and all of a sudden we had a Hanukkah party, with a menorah lighting and fried food. For me, having my senior colleague there and excited to join us was a moment of realizing I could bring my full self to the table.

If I were the type to make holiday wishes, that is, perhaps, what I would wish for: a place where all Jews of color could bring their full selves to all the tables where they sit.