Hamilton County's Population is Up, Fueled by Immigrants 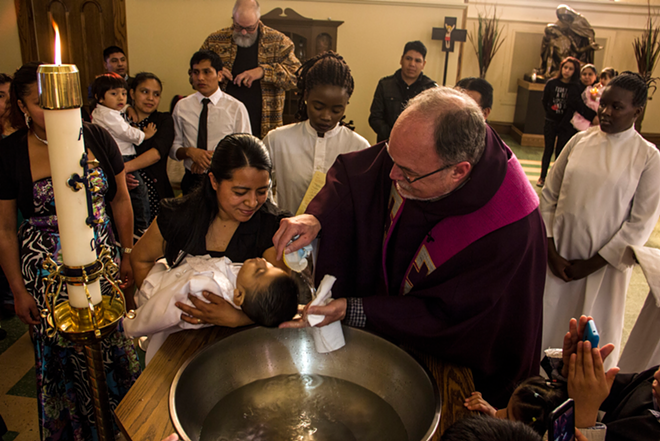 Photo: Nick Swartsell
Father Jim Schutte baptizes the child of Guatemalan immigrants at St. Leo the Great Catholic Church in Cincinnati as congregants who are refugees from Burundi look on.

Hamilton County gained more than 14,000 residents between 2010 and 2018, data released today by the U.S. Census Bureau shows, but without immigrants, the county's population would have dropped by almost 3,000.

Other counties in Greater Cincinnati saw less impact on their population due to immigration. Warren County gained more than 19,000 new residents, but only about 3,600 were immigrants. More than 9,000 others came via domestic migration.

About 2,800 people moved out of Butler County between 2010 and 2018, but the county saw almost 11,000 more births than deaths and also added more than 6,000 immigrants for a total population gain of more than 14,000. Greater Cincinnati is home to a wide array of immigrants from Central and South America as well as a number of African, European and Asian nations.

The Census data does not differentiate between documented and undocumented immigrants.

Nationwide, about 10 percent of counties saw their populations buoyed by immigrants, including the nine fastest-growing counties in the country.

Other counties in Ohio also saw their populations boosted by immigration. Franklin County saw almost 51,000 immigrants settle there between 2010 and 2018, adding to strong gains from domestic migration and natural change. All told, the county gained almost 147,000 people in that time period.

Immigrants cut the population drain for Cuyahoga County — which lost more than 36,000 people — almost in half. More than 74,000 people left the county, but 29,000 immigrants moved in.

Roughly half — 43 of 88 — counties in Ohio lost population between 2010 and 2018, including a vast swath of counties in the largely rural southern and eastern part of the state.