Have Your Alcohol and Eat It, Too

ccording to these featured chefs, there are several reasons to add alcohol to desserts, including everything from cutting the richness and cleansing the palate to lighting it on fire for show. But the best reason we can think of? Just because.

“I love using booze as an ingredient,” says chef Sarah Ray, pastry chef for Downtown’s Metropole. “I mean, I don’t ever want one of my desserts to have an overly-boozy quality to it but, honestly, there are more parallels between a restaurant’s cocktail menu and dessert menu than its savory menu. The ingredients/flavor profile we use are the same. We strive for the same balance of sweet, sour, et cetera. Cocktails and pastries when perfectly balanced just simply ‘dance’ on the palate.”

And the following desserts do just that.

With the addition of new head pastry chef Amy Guterba — a graduate of the Culinary Institute of America with training under the likes of chef and restaurateur Todd English and in kitchens including Le Circe in New York — Jeff Ruby’s classic steakhouse The Precinct has some new plans in the works: like adding Guterba’s particular brand of dessert expertise to the menu (and possibly a bakery-esque endeavor, according to Britney Ruby Miller, director of guest services and development).

But regardless of the new, the Bananas Foster is and always will be a Precinct classic, made tableside for two with a dramatic flambé.

The Precinct’s Bananas Foster includes brandy, which is set ablaze and burned off; cinnamon, which flames up for added sparkle; bananas; brown sugar; English walnuts; and hazelnut syrup — the secret for the nutty background and what sets this particular Bananas Foster apart from the pack, according to Guterba. All are heated and condensed down to a syrup and poured over housemade vanilla ice cream.

Nicholson’s is a Scottish tavern known for its Celtic pub grub, servers in traditional plaid kilts and a selection of more than 70 different single malt Scotches. Their chocolatey pot de crème should be added to that list, despite the fact that it hails from a different part of Europe.

“Pot de crème is basically French for a ‘pot of custard’ or ‘pot of cream,’” says Executive Chef Jeff Poore. Melted together and then chilled to set in a half-pint, wide-mouth mason jar, the main ingredients in this pot de crème are egg, cream, milk and chocolate, with a special, alcohol twist: a bit of Glenmorangie Scotch.

“It contrasts well against the chocolate and also gives it a little bit of our Scottish flair,” Poore says.

Who says baked goods need to be loaded with butter to be delicious? Not self-taught bakers Jessica Bechtel and Jana Douglas. In April of 2012, the duo combined their passion for baking, kindness, sustainability and edible artistry into their vegan venture, Happy Chicks Bakery.

Douglas says they strive to make their food both creative and accessible to everyone. “For us that means having as few of the common allergens as possible like dairy, eggs and soy,” she says. “It’s why we’ve developed gluten-free options of as many treats as we can. It also means we don’t ever use artificial colors or preservatives.”

Drawing inspiration from a variety of cuisines, with seasonal, regional and unexpected flavor profiles, alcohol as an ingredient in Happy Chicks desserts seems par for the course.

Their Green Fairy cake, so named for the louched St. George absinthe soak used in the recipe, features anise seeds and matcha powder in a complex cake, topped with chocolate ganache.

For a full list of retail locations or to place a custom order, visit happychicksbakery.com. 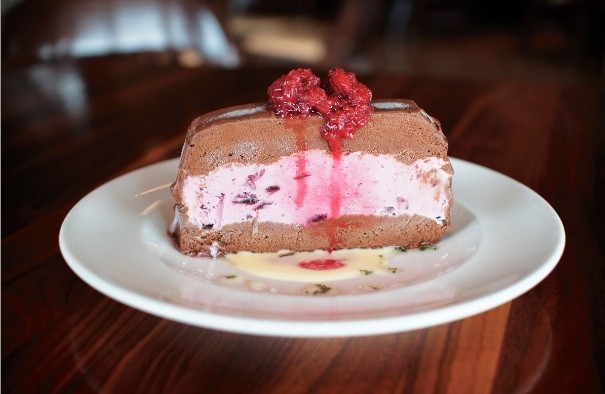 “It’s kind of a luxury to have a pastry chef in house,” says Moerlein Lager House pastry chef Kayla Distler. “A lot of (restaurants) bring desserts in from other places.”

And while many people might consider Moerlein’s extensive beer list a dessert menu in and of itself, Distler has worked hard to create a collection of sweets that complement the restaurant’s German influences and beer-inspired dishes including a Chocolate Stout Cheesecake and a Black Cherry Forest Cake (pictured). The Black Cherry Forest Cake is a play on a traditional German Black Forest Cake. A layer of Graeter’s cherry cordial ice cream is enveloped by kirschwasser ganache and cherry compote and then garnished with crème anglaise and mint syrup — all served deliciously cold.

“The ganache is basically a chocolate glaze,” Distler says. “The kirschwasser is folded into it, so it’s flavored with the cherry liqueur. … The kirschwasser was more of a German influence, that’s why we used that.”

With Belgian roots — a country known for its delicious and high-quality chocolate — Latour previously worked as a pastry chef at The BonBonerie for 20 years. Today, she sells her chocolates full-time at local shops and through online ordering.

And while she can skillfully handle the classics, Latour has a flair for uncommon flavor combinations like bacon and oregano and lavender and sea salt as well as fantastical molded shapes, like Buddha heads, including fun seasonally themed treats — e.g. rainbow bunnies for Easter and ghost chili skulls for Halloween.

Her filled chocolates cover a wide variety of flavors, but include choices like the pictured rosemary mandarin Buddha heads; honey basil caramels (finalists for nationwide 2013 Good Food Awards); and her decadent Wild Turkey ovals, flavored with a healthy dose of Wild Turkey bourbon.

Chef Sarah Ray started out in savory but always envied the creativity she felt pastry chefs had. And after graduating from Sullivan University in Louisville, Ky., with a pastry degree and working as a pastry sous chef for the famed Seelbach Hilton in Louisville, she went on to become the head pastry chef for the hotel’s AAA five-diamond rated The Oakroom restaurant.

Today she works as head pastry chef at the Metropole in the 21c Museum Hotel. Here she takes influence from Executive Chef Michael Paley’s layered approach, aiming to complement the restaurant’s savory, seasonal menu and play with familiar ingredients.

“So many dessert menus are just sweet, sweet, sweet,” Ray says. “I really strive to find a concise balance with every element on the plate with my desserts. Whether (that’s) texture, acidity, richness.”

Her Malted Chocolate Mousse Bar is essentially a layered chocolate mousse with smoked almonds, raspberry and a caramel sauce made with IPA beer. While the alcohol itself cooks down in the preparation, the beer’s hoppy goodness is left behind.

“The IPA caramel added an element of bitterness that plays off of the smoked almonds, which in turn worked with the chocolate and malt. Chocolate, malt and almonds are pretty classic flavors either paired individually or together. It just simply made sense … and it tastes damn good.”