Here is Where Coronavirus Cases Have Been Discovered in Cincinnati 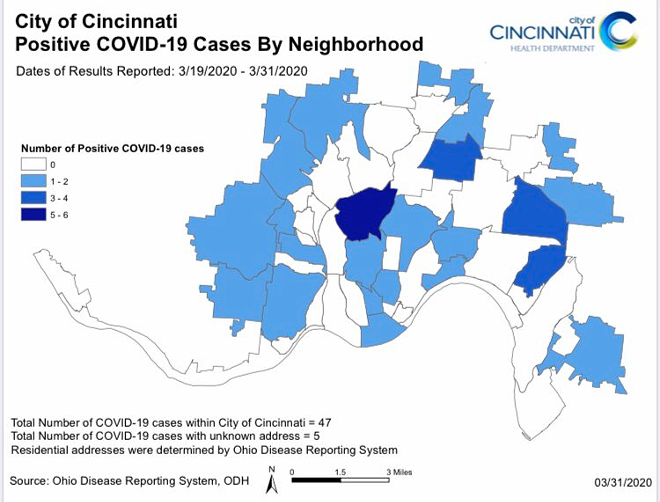 Photo: City of Cincinnati
A breakdown of where COVID-19 cases have been discovered in Cincinnati. White areas have no cases, darker blue areas have more cases.

The Cincinnati Health Department released a map on Tuesday, March 31 showing where each of Cincinnati's 47 cases to date of COVID-19 have been discovered.

Clifton had the most cases, with between five and six. Mount Lookout and Oakley had the next highest case counts, with between three and four each. A number of other neighborhoods, including East and West Price Hill, Over-the-Rhine, downtown, Mount Auburn and others each had one case.

The Health Department last week issued demographic information about the 36 people who had tested positive at that point. The median age of Cincinnati's COVID-19 patients was 49, and twice as many males as females had tested positive for the virus. Twenty-three of the positive confirmations came from tests completed by private processors Lab Corp, while six came from the Ohio Department of Health and two came from Christ Hospital. Other individual cases were confirmed by other private labs or hospitals.

As of March 31, the state of Ohio had 2,199 confirmed cases of the virus, leading to 585 hospitalizations, 198 visits to intensive care units and 55 deaths.

So far, no deaths have been reported from cases of COVID-19 arising within the city limits of Cincinnati. However, at least one Greater Cincinnati COVID-19 patient — a 66-year-old woman from Kenton County, Kentucky — has succumbed to the illness.