CityBeat went to Middletown's homecoming game to talk to Middies about what J.D. Vance means to their town's reputation. 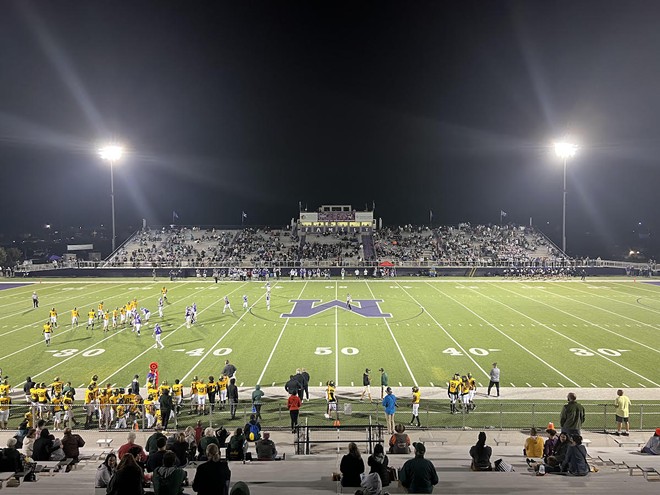 Summing up what the people of Middletown think of J.D. Vance is complicated. The author, venture capitalist and U.S. Senate candidate has built a platform and fortune on his experience growing up in Middletown just outside of Cincinnati, but both fans and opponents differ on how he reflects upon the small city.

Middletown was thrusted into the national spotlight in 2016 after Vance published Hillbilly Elegy: A Memoir Of A Family And Culture In Crisis and then again in 2020 with the release of Netflix’s film adaptation. Critical reception for both was mixed; some thought the story was exploitative, others inspiring.

On a chilly Sept. 23 evening, CityBeat attended the Middletown homecoming football game to ask Middies – a moniker for a person from Middletown schools – what J.D. Vance means to them, just weeks before he takes on Democrat Tim Ryan for Ohio’s U.S. Senate seat that Rob Portman will vacate.

Amidst a setting sun, the smell of popcorn and the booming sounds of the Middie marching band, Krista Owens is surrounded by friends from her high school class of ‘82.

“It’s the most wonderful tribe ever,” Owens says. “High school was incredible because of the tribe I was given.”

Owens doesn’t think Vance has any Middie pride, but she doesn’t fault him for it either. She says his upbringing was just different from hers.

“I read [Hillbilly Elegy]. I thought it was pretty good,” Owens tells CityBeat. “I thought that it did speak to the way it was and helped me understand a lot, not only about my family, which was so different from his, of course, but other people’s families that I didn’t completely get until after that book.”

A woman who declined to provide her name to CityBeat says Vance was not responsible in his depiction of Middletown as a struggling city in the novel.

“I don’t think he understands Middletown at all,” she says. “Middletown needs more people that believe in the town and what they’re trying to build. Just because he wrote a book doesn't mean he has the same kind of idealism of a lot of people that live here and want to be here do.”

Another Middie declined to provide her name to CityBeat, but she was upfront about where she works.

“I’ve seen one J.D. Vance sign in Middletown yards, and I drive a school bus!” she says. “I personally think people feel insulted by the book – not so much by the movie, but definitely the book – so a lot of people are not really in favor of him.”

Chick Fromfelder was not impressed with Hillbilly Elegy, he says.

“I thought it was like a fifth-grader had written it, like it was never edited,” he says. “As far as a candidate, he is a Republican. A lot of people are going to, I believe, hold their nose and vote for him. I think he’s changed his position on some views, and that bothers some people.”

Fromfelder’s wife did not have an opinion on the book, but she believes a Republican should be holding the seat Vance is running for.

“I just think we need a Republican senator from Ohio. Don’t know much about his background,” she says.

Talia Fuentes is a sophomore at Middletown High School. She grew up near Barnitz Stadium where Middletown has played its football games since 1950. Sitting in the stands of the paint-chipped yet sturdy cement-block stadium, Fuentes yells her thoughts on Vance over the sounds of students cheering.

“I don’t think [Vance] should only define Middletown as a bad place because there’s a lot of creativity and diversity here,” Fuentes says. “Everyone gets along for the most part.”

Terry Shores has taught middle school history in Middletown for decades. He says Vance has the trust of only a segment of Middletown.

“I feel like he highlights certain things about Middletown to advance a certain narrative for his benefit,” Shores says. “He’s made us the poster child for everything that’s gone wrong with America. A city that once was thriving and now has fallen on hard times, so I don’t think the nation looks at Middletown in a positive light because of his portrayal.”

Many of the people CityBeat approached said they didn’t know who J.D. Vance was, but that could have been a polite way of saying, “Let me watch the game.” In fairness, the score was close. The Middies ended up beating Sycamore 28-24 – a similar spread to recent polling numbers between Vance and Ryan.