The soccer team says it intends to develop housing on the 60 vacant parcels near Ezzard Charles Drive, not build a stadium, but some residents expressed concerns. 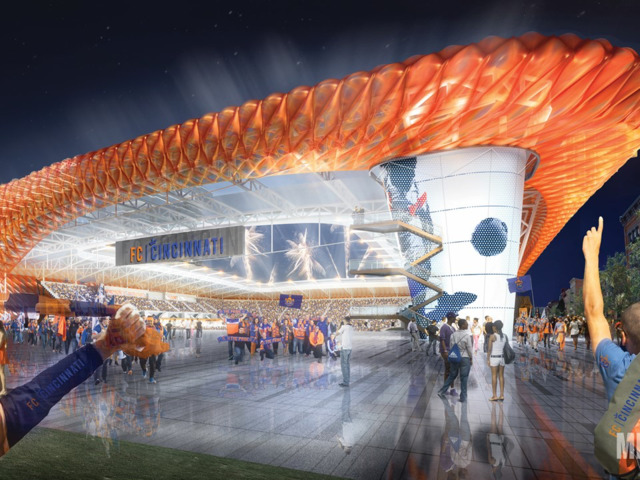 Provided
A rendering of the potential FCC stadium

The board of the Cincinnati Metropolitan Housing Authority last night approved a purchase option requested by FC Cincinnati for rights to buy some 66 vacant parcels in the West End at market value.

The plots are on Laurel Park Drive, East Laurel Park Drive and West Laurel Park Drive. Some of the parcels neighbor existing single-family homes. The team says it wants that land to build houses, not a stadium it says it needs for its Major League Soccer bid, and CMHA CEO Greg Johnson says there’s not enough room for the stadium on the land under option. But some residents are concerned that the purchase option means a sports facility is also coming to the West End, bringing big changes to the neighborhood.

Some attendees of the public meeting booed the CMHA board’s unanimous vote approving the purchase option. Four residents of the neighborhood, including members of neighborhood resident councils, said they oppose the stadium or urged caution. Seven Hills Neighborhood Houses Director Alexis Kidd asked that CMHA require FCC to enter into a community benefits agreement before buying the properties for housing.

Others expressed concern that a stadium, along with a glut of bars and high-income housing that could come with it, will change the neighborhood.

The move likely signals continued interest in a location in the West End as the place for the team’s potential stadium. One possible site: nearby Stargel Stadium on the neighborhood’s eastern border with Over-the-Rhine. That stadium serves Taft High School.

The Cincinnati Public School Board will discuss overtures by FCC today, possibly about that property, at their 11 a.m. board meeting.

Of course, it’s still unclear whether the team will be building its privately financed $200 million stadium at all, or if the West End will be the preferred location for the facility. Previously, FCC had zeroed in on a site in Oakley, even receiving pledges from the City of Cincinnati and Hamilton County officials for some $52 million in infrastructure investment around the site.

FCC is waiting on word as to whether it will receive a Major League Soccer expansion franchise, which team leadership says will necessitate the sports facility. The league's decision between Cincinnati, Sacramento and Detroit is expected to come next month.

The team says that, should it get an expansion franchise and chose the West End, it will engage in robust community engagement efforts around a potential stadium. The purchase option approved by CMHA won’t affect plans for Citirama, a homebuilding effort by Drees Homes, which will happen south of Ezzard Charles Drive.

“FC will work with CMHA to develop a winning plan that includes proactive community engagement with residents, stakeholders and those with historic ties to the West End,” according to a statement by the team. “FC Cincinnati and (FC Cincinnati majority owner) Carl Lindner (III) are fully committed to extensive community engagement and those activities will be forthcoming.”