Cincinnati is now a temporary home for Cate Blanchett (this year’s winner of the Best Actress Oscar for Blue Jasmine), Rooney Mara (The Girl with the Dragon Tattoo, Side Effects, Her), Sarah Paulson (The American Horror Story anthology, 12 Years a Slave) and Kyle Chandler (The Wolf of Wall Street, Zero Dark Thirty, the Friday Night Lights series) as filming for Todd Haynes’ upcoming movie Carol is in full swing! Some of the stars (and a giant movie crew) were spotted filming at their first location, Eden Park, as well as along US 52 in New Richmond and Spare Time Grill in Alexandria, Ky. The Enquirer’s Glenn Hartong was able to catch a glimpse at Mara and Paulson looking straight out of the '50s filming a scene at the now-closed diner.

The film is based on is based on Patricia Highsmith’s 1952 novel (published as both Carol and The Price of Salt) about Carol (Blanchett), a wife in a loveless marriage on the brink of divorce who falls in love with a young woman, Therese (Mara). The book was revolutionary at the time for portraying a lesbian relationship, and doing so in a non-stereotypical light. Chandler will portray the titular character’s husband while Paulson plays Abby, Carol’s best friend.

Filming continues this week at a home on Grandin Avenue in Hyde Park. Retro Westside institution Maury’s Tiny Cove will be closed April 1 for a day of filming Blanchett and Mara’s characters’ first date. Cincy Magazine tweeted  that the Cincinnati Club, where the mag’s office is located, will also be used to shoot the film at an unspecified date. We’ll keep an eye out — the building is right across the street from CityBeat’s HQ. Search #carolmovie on Twitter for the latest dish on the movie and its local filming and tweet us if you have a run-in with any of the stars!

Even if Carol wasn’t filmed exclusively in Cincinnati, the adaptation sounds like a great premise for a film. Unfortunately the same can’t be said about most of the recent movies based on books and other, previous movies. This week in remake fuckery, we have Rosemary’s Baby and The Birds — two classic ‘60s horror films undergoing contemporary reworkings. Zoe Saldana will take on Mia Farrow’s iconic role in a made-for-TV version of Rosemary coming to NBC; Transformers director Michael Bay is apparently producing the remake of Hitchcock’s feathery flick. We can only guess that Bay will replace said birds with laser-shooting Velociraptors.

Speaking of dinosaurs, paleontologists in Alaska last week discovered a miniature species of tyrannosaurs about half the size of its close relative, the T. rex — essentially, what the prehistoric Paris Hiltons were carrying around in their designer mammoth skin handbags. Teacup-Rex!

A post I found recently on Imgur (because Reddit still confuses/scares me) recalls the story of when the United Way decided to release 1.5 million helium balloons into the air in Cleveland in 1986, breaking the world record. The photos of the event are stunning, but — as anyone with a tiny bit of foresight could tell you — the mega-balloon launch totally backfired. Not only did this result in more than 1.5 million pieces of plastic trash around the region and as north as Ontario, but also reportedly hindered a missing person search on Lake Erie. 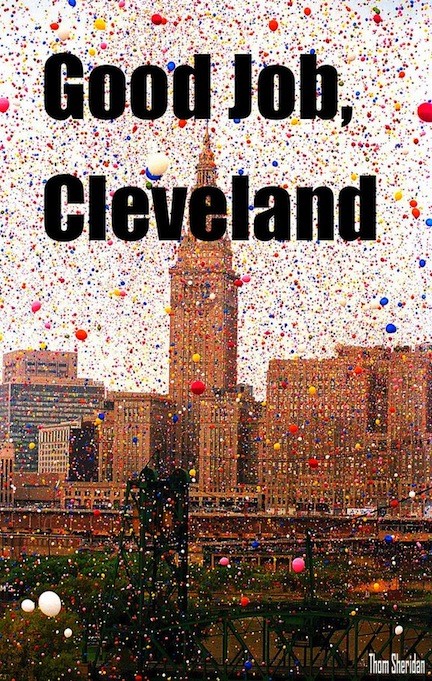 Everyone’s talking about “Strangers Kissing,” a viral video of 20 strangers making out for the first time that’s actually (somehow) an ad for women’s clothing label Wren. A bit contrived, I suppose, but definitely intriguing and pretty hot.

Jimmy Fallon put his own twist on the vid…with puppies and kitties.