Senior prom is a special milestone for many American teens, but even traditions as old as school dances change over time. Intimate one-on-one dates have given way to group dates and attending as friends. Flip-flops and cutout cocktail dresses replaced the overdone evening look for many girls. And now a southern-fried specialty is getting in the prom game. Kentucky Fried Chicken — What? Yes. — partnered with Louisville florists to create the chicken corsage. For $20, Louisville residents can purchase a corsage from Nanz and Kraft Florists that includes a $5 gift card to KFC, where folks can then go buy the perfect piece of chicken. It can only be assumed that after prom, girls will press the greasy chicken bone between their yearbook pages, just like their moms did with their corsages when they were young.

It’s confirmed: Stephen Colbert will take over the Late Show desk once David Letterman retires sometime in 2015. That’ll mean no more Colbert Report and, likely, the end of the host’s faux-servative character. Start the countdown to the announcement of a new reality show following Letterman, Leno (and, let’s just be honest — Craig Ferguson and Conan O’Brien) around Ex-Host Island. Move over, old people! Slightly younger people are takin' yer jerbs!

In the contemporary classic Mean Girls, Lindsay Lohan’s Cady describes Halloween as, “the one night a year when a girl can dress like a total slut and no other girls can say anything about it.” Well, Coachella must be kind of like Halloween for celebrities, except instead of wearing lingerie and some form of animal ears, they throw on the most jumbled assortment of terrible fashion fads. Not sure about the new cream-colored designer jumpsuit you purchased? Try it out in the middle of the desert! Want to channel Woodstock without ever having been to, read about or seen a photo of Woodstock? Grab a Native American headdress and wear that shit to Coachella. The fest is HQ for floral head wreaths, jorts and combat boots (often all worn at once), and for some reason I cannot pull myself away from the celeb photos of this mess. It’s like someone made a slot machine with various teenagers’ style blogs on Tumblr and everyone going to Coachella must take a spin to determine their outfit.

“Ooh, I got a bindi, a latex bra, a crocheted duster and gladiator sandals!” Just look at these famous attendees, capped off with Koachella Kweenz Kylie and Kendall Jenner. 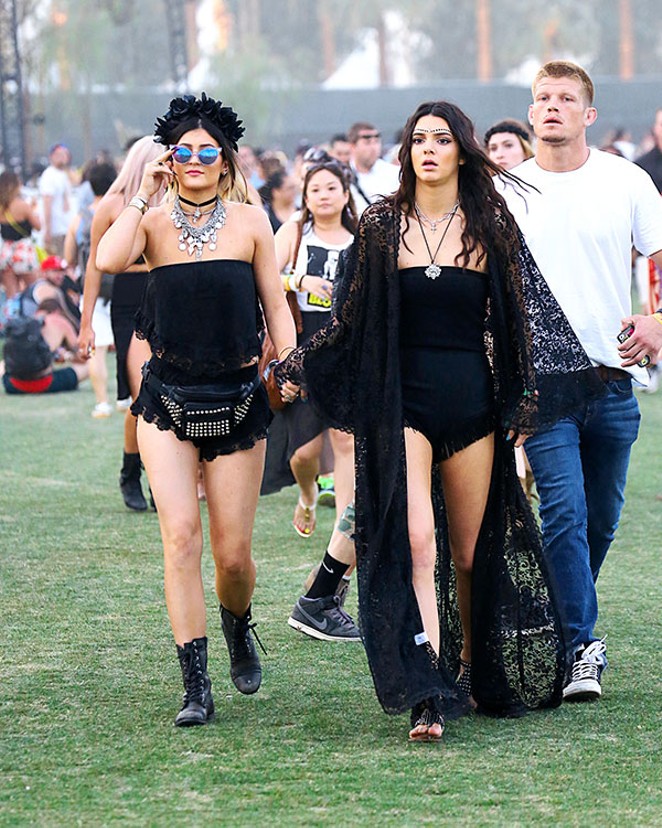 But seriously, you need to see this video that’s (probably) of Leonardo DiCaprio Coachin’ it up (people say that, right?) at an MGMT performance, which makes me feel weird and old.

And since I brought up Lindsay, the supposedly sober starlet was supposedly washing down all that Coachella dust and glitter with vodka this weekend. The reports come days after the latest episode of her Oprah docu-series, in which she admits to drinking alcohol after her latest stint in rehab. Also, there were a lot of emo scenes of Lindsay filming herself crying. Get it together, girl. OPRAH WILL CUSS AT YOU AGAIN. And everyone knows if Oprah has to cuss at you twice, you will spontaneously burst into flames.

Celebrispawn in the media is quite the hot topic as of late, particularly thanks to Dax Sheppard and Kristen Bell vs. Papz (this will definitely be a court case our children will study in history class). But what about fake famous babies — fair game? OK! Leslie Knope is pregnant! Pawnee's upcoming addition will be the Prince George of fictional TV comedy births. Which is to say, a very big deal. Parks and Rec's Leslie and Ben will be the best parents ever. I think I speak for fans everywhere by saying we can't wait for his or her first playdate with the world’s most attractive child, Ann and Chris’ little Oliver.

Sunday was an epic night for television with the final Mad Men premiere (sort of) and a crazy-ass episode of Game of Thrones. These two are great popular, critically-acclaimed dramas, but they’re on complete opposite ends of the style spectrum. Mad Men’s seventh season debut was gradual and calculated (as always), giving viewers a chance to fill in the blanks between Season Six and now, speculate on what’s to come and read into every little detail. And by detail, I mean Pete’s California Ken Doll look, which was #flawless. Ratings were way down Sunday — the lowest-rated premiere since the second season's in 2008. Some attribute the drop to a lackluster episode, but the truth is probably that everyone was too busy losing their shit over this week’s Game of Thrones to get into the cool Mad Men mood.

Without giving too much away (and because I spoiled “the incident” for myself since I can’t stay off the damn Internet — so I know it sucks), Thrones fans who hadn’t already read the books were treated to a truly righteous, bubbly, bloody scene this week that totally flips the script for many of our favorite characters. Can’t these people get through one wedding without having to immediately plan a funeral?

summer, so I need to go quit my job and fulfill my dreams of being a roadie. Byé!