Think “selfies” were limited to teenagers at the mall food court, drunk girls at bars and an alarming amount of people in bathrooms? Broaden your scope to include law enforcement with Cop Selfies, which sadly also include plenty of toilet shots: 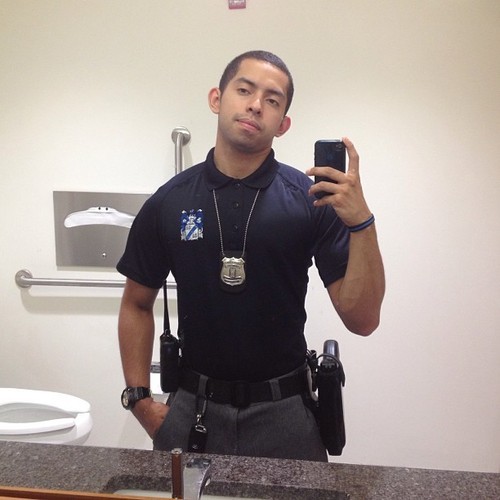 And even one with Nickelback’s Chad Kroeger.

Possibly more depressing than the fact that police make duckfaces, too? The Rich Kids of Instagram, what started as a blog highlighting the hashtagged lives of the young and privileged, are reportedly getting their own show.

Start jogging in place to raise those endorphins, because your mood is LIT’RALLY going to plummet when you hear this news: Pawnee’s Chris Traeger and Ann Perkins are leaving our lives as Rob Lowe and Rashida Jones will be exiting Parks and Rec mid-way through the upcoming sixth season. The hot-and-cold couple decided to make a baby in last season’s finale, so hopefully we’ll get to see Chris obsess over Ann and the baby’s health — I shudder to think about the gargantuan prenatal vitamin he’ll force down poor Ann Perkin’s throat — and the subsequent birth of the most attractive baby ever.

What angsty teen didn’t grow up with Daria, worshiping Ms. Morgendorffer’s monotonous snark, too-cool-for-school edge and perfect Doc Martins? Well, 10 years later, Daria’s back (NOT REALLY), in the flesh, for a Lawndale High reunion, in this faux movie trailer:

Everybody is happy about this because everybody obviously loves Ellen, except probably One Million Moms, who can all eat one million dicks for all I care. GO ELLEN.

The Doctor is in — Peter Capaldi will replace Matt Smith in Doctor Who, making him the 12th actor to portray The Doctor on the show, the longest-running sci-fi series. Capaldi is best known for his role on the British political satire The Thick of It (which inspired HBO’s Veep), which is available on Hulu. He steps in front of the camera as Doctor No. 12 this fall.

Time Warner Cable users have even more to complain about than usual as the provider has dropped CBS and Showtime “due to outrageous demands for programming.” This blackout does not result in a price cutback for customers and it especially sucks for people who just recently got into Ray Donovan.

Hey, Mumford & Sons have a new music video. Something look a little off to you?

Comedy Central Roasts are generally reserved for washed up celebs and veteran comics, but the network is gonna try something new with the Roast of James Franco. Hosted by BFF Seth Rogen, the roast is sure to draw in an even bigger, younger audience. Yes, we all love it when Seth and James get together (see: the last decade), but the real laughs will come when the seasoned roasters sink their teeth in ole Franco.

There are two types of people who spend too much time on the Internet. People who troll comments, who need to have their toenails removed one by one, and people who do this, who should be showered in champagne.