Happy Wednesday, y’all! Go make yourself a hump day treat because, if you didn’t know what day it is…

Tina Fey (who wrote Mean Girls) will soon end another hilarious quotable venture as 30 Rock which kicks off its final season Thursday on NBC. We’ll see Liz and Criss on their quest to make a plant baby, Jenna prepare for her wedding and countless more priceless moments from Kenneth, Jack, Tracy and the others. Go brush up on your Lemonology here.

It’s Always Sunny in Philadelphia, another returning fall comedy, is always willing to shake things up to keep the show spontaneously funny (cut to “fat Mac”). This season the show features an all new cast!

If you want to lose your last hope for humanity, peep the comments on Facebook. One fan suggested,“You know what networks should do ... ASK the people when they are thinking of new cast members ! people watch the show for the cast not the content for the most part.”
“You're joking? Why is Stephanie Tanner from Full House on it?!?” complained another, clearly confusing DJ with the middle Tanner sister (amateur).
And FX better watch their numbers because some people will no longer be tuning in: “not good!!!!! writers will deeply regret new cast because there is no way on earth the original can be outdone a nd guess what? COUNT ME OUT AS VIEWER!”

In other fake television news, the Twitter du jour has to be Fake Louie Episodes (@FakeLouieEps). Highlighting the simple yet absurd storylines featured on Louis C.K.’s FX hit, Louie, the tweets feature three-sentence descriptions of episodes that could totally exist — they just haven't been written yet. 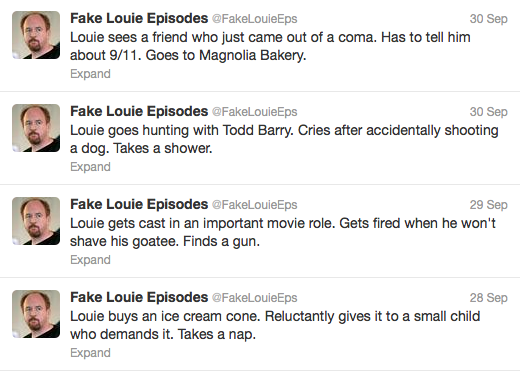 Hey, should you really be wearing that fedora? Click here to find out.

In fact, if you find yourself on the above Tumblr or notice even your closest friends hiding your incessant Facebook statuses, peep this handy flowchart  to decided what to share and what to keep to yourself

Because pop culture isn’t always nipple slips and baby bumps, we lost two TV stars this past week. Sahara Davenport (also known as Antoine Ashley) of RuPaul’s Drag Race and Sons of Anarchy’s Johnny Lewis, both in their twenties, flew up to the big boob tube in the sky. It has not been reported how Davenport passed; Lewis, who played the lovable “Half Sack” on Sons, allegedly murdered his elderly landlord before falling to his death from his roof. Find details here if you want to spend the rest of your day crouched in the fetal position in a dark room, quietly sobbing.