So, I know you probably read CityBeat exclusively and religiously, but it is kind of cool when Cincinnati pops up in national news for fun reasons. Lately, our grub and attractions have been name-dropped by some major outlets. Food and Wine mentioned Eli's BBQ as one of their "Best BBQ Pit Masters and Grill Geniuses." Yahoo dubbed Tom + Chee's tasty concoctions one of America's most outrageous grilled cheese sandwiches. USA Today listed 10 reasons to visit Cincinnati, featuring Jungle Jim's, the Run Like Hell Halloween race, Opening Day and more. Sure, we already knew about these great aspects of our city, but it's about time everyone else did, too.

In case anyone was unaware, I really like This American Life. The true storytelling radio show presented a live theater event broadcast in cinemas across the U.S. and Australia May 10 (with an additional screening May 15) that anyone with a soul who loves the show would truly enjoy. Because the format shifted from radio to theater, fans got to enjoy visual elements like dance performances, illustrations and a short film by Mike Birbiglia. Peep the NPR-inspired hilarity below.

Check out the radio debut of the episode on public radio this upcoming week.

The Internet bombards us with exaggerated tales of people who have transformed from cheeseburger-gobbling slobs to marathon-winners every day, so I've become suspicious of any before-and-after health stories. That said, when I saw this video on Facebook about a disabled veteran who can now walk because of yoga, I was pretty amazed. Arthur Boorman was told by doctors that he'd never be able to walk unassisted, but he took up yoga, dropped 140 pounds and, well, check out the end result.

Have you ever been hard at work, in the zone, on a roll when somebody stops by or calls to ask a completely random question — one no human would know off the top of their head but that anyone could easily look up since it's the year 20-GD-12 and the Internet exists? Enter Let Me Google That For You. Just type in a question, get a URL, make it tiny and send that to your troll. It'll take them to a page that looks just like Google, manually fills out said question, and brings them to a page of results (so you're not being a total dick). LMGTFY: Because my brain is not a search engine.

Finally, check out Awesome People Hanging Out Together. Hey, it's Elvis and Muhammad Ali! 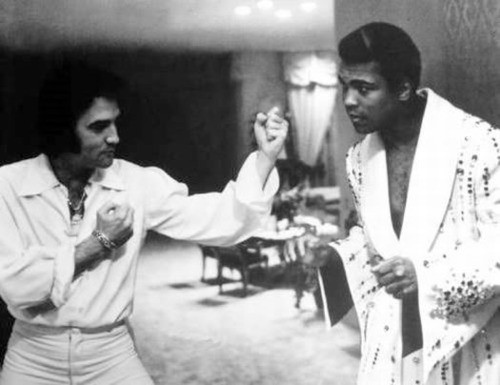