Japan is the breeding ground for freaky trends that never (thankfully) make it across the ocean. In fall of 2012 we were introduced to “bagel heads,” a temporary look achieved by injecting saline into the forehead until a dome is formed, then creating a creating a small crater in the center. The end result looked like a bagel or donut implant in your forehead. Totes desirable. Then there's ganguro, a Japanese fashion trend where harajuku meet Snooki, resulting in orangey-tan girls that look freshly plucked from an anime cartoon (tanime?) and now…eyeball licking? Gawker reports conjunctivitis is running rampant in Japanese middle schools with the sudden popularity of kids licking each others' MFing eyeballs. Japan, I will take your cat cafés and affinity for all things tiny (see below) but keep your tongues away from my see-holes.

Portlandia has been renewed for two more seasons!

The Simpsons is definitely ingrained in American popular culture. Once an edgy, almost salacious TV show, Homer & fam are pretty mild in comparison to television’s modern-day exports — animated or otherwise. So it’s no surprise that Universal Studios announced a Simpson’s theme park to open this summer at its Orlando, Fla., resort with a full replica of the fictional town of Springfield. There’s a Krusty Burger, Kwik-E-Mart, Duff Brewery (yes, an actual brewery with beer created exclusively for the park) and, of course, Springfield would not be complete without Moe’s Tavern. Go here to check out photos and video from the newly-opened park.

If Hodor’s a DJ, Winterfell's a dance floor

Veneers, dwarf darts and chest beating — that’s what you can really look forward to going into The Wolf of Wall Street, Martin Scorsese’s new film based on the story of ‘90s stock market criminal type, Jordan Belfort. OK, that and Leonardo DiCaprio, Jonah Hill(‘s freaking veneers) and Matthew McConaughey.

The song playing in the background is off Kanye West’s new album, Yeezus, which came out Tuesday. Kanye, who apparently is a father now (apparently, because since Kim hasn’t produced so much as a bowel movement in the past decade without an accompanying press release, no one can really be too sure about this baby thing), promoted the new album with an American Psycho-inspired commercial — I am not calling this a short film — starring Scott Disick, Kourtney Kardashian’s baby daddy, and Jonathan Cheban, Kim K’s main butt buddy/occasional frienemy. Behold:

Before American Psycho fans call blasphemy, author Bret Easton Ellis has come out saying he actually wrote the spoof himself.

Mad Men’s penultimate season — arguably its darkest yet — wraps up this Sunday. Now that the merged agencies have agreed on a name and logo, they’re ready to go public! Check out this awesome press release (via Mad Men’s Facebook page) SC&P letter: 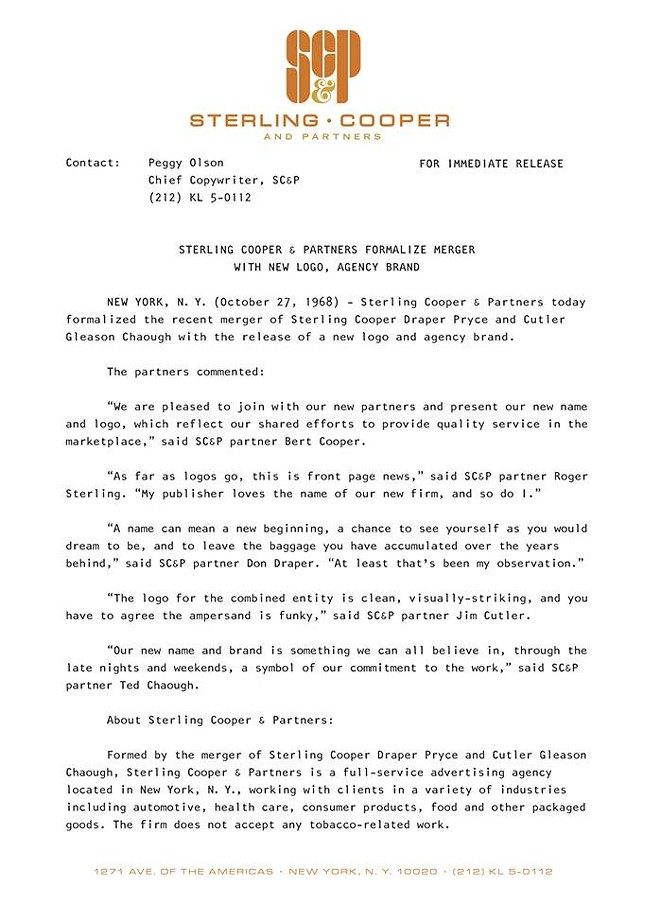