After hours of furious research, it was found nearly every human remotely involved in show business over the years (including ‘90s Nickelodeon star Kel Mitchell and silent actor Charlie Chaplin) are within just 2 degrees of Mr. Bacon. The only stars I could find with a higher number are Paula Abdul and Humphrey Bogart (who both have a whopping BN of 3). Here’s to Google: the company responsible for incredible technological advances that continues to make us waste time on the Internet and screw off at work.

Netflix Picks of the Week: Looking for something new on Netflix now that you’re all caught up on Breaking Bad and Celebrity Rehab? Check out Bobcat Goldthwait’s over-the-top pop culture massacre God Bless America and Winnebago Man, the humorously touching documentary about the angry star of an early viral Internet video.

Saturday Night Live returned for its 38th season Saturday. Jay Pharoah debuted as Barack Obama, with Fred Armisen handing over the presidential torch. We also saw Taran Killam will serve as Paul Ryan and Jason Sudekis will continue to play Mitt Romney (squashing the rumors that he’d leave SNL along with Kristen Wiig and Andy Samberg). The trio is expected to appear on SNL Primetime Edition, the special election season show to air this Thursday and Sept. 27 on NBC. Seth McFarlane hosted Saturday’s premiere, and to sum up his performance in one word: VOICES. HuffPo breaks down the episode.

And as one television show kicks off, another comes to a close. Sunday brought the one-hour series finale of Showtime’s pot dramedy, Weeds. Without spoiling too much, the finale gave us a peek seven years into the future. The good news about 2019: the Botwin crew (plus Doug and Andy) is alive and mostly well. If the show's predictions pan out, fan-made renderings of an even-thinner, transparent future iPhone were totally spot-on; the next diet craze will feature Regina George’s all-carb regime; and, most importantly, marijuana will not only become legalized, but sold like cigarettes in stores and in edible forms at coffee shops. The bad news: Shane grows a bad ‘80s cop mustache.

Everyone has an opinion on TLC’s hillbilly hullabaloo, Here Comes Honey Boo Boo, especially regarding the series’ matriarch, mama June and her scary Jabba neck. But have you seen The Real Housewives of Miami? I give you Mama Elsa: the stuff of surgical nightmares. 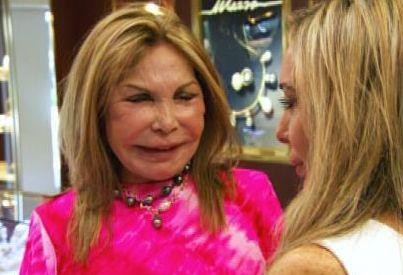 In music news, Ben Folds Five is back and showing some love to Jim Henson in this new video.

Steven Spielberg's Lincoln is due in theaters this November, and the trailer has just been released. Apparently 90 percent of Hollywood is in the film, including what I’m guessing is an Tupac-inspired Abraham Lincoln hologram (seriously, though, Daniel Day Lewis is scary good). I was totally captivated, swept away to the 19th century, up until Adam from Girls arrived on the scene. From 1:37 on, it was all union suits and depraved sex acts to me.

Alison Pill apparently didn’t learn one lesson explored in the show on which she stars, because homegirl accidentally tweeted a topless pic last week. The photo tweeted was meant for boyfriend, actor Jay Baruchel, which reveals that Alison Pill has no idea what Twitter is or how it works. It was removed immediately and, in the best reaction possible, Pill owned up to the flub and apologized for being just as technologically inept as The Newsroom's MacKenzie.