The Internet is a scary place, and anyone who’s browsed 4chan can attest to that. But this creepy technological web can connect strangers and answer questions, often with unexpected results. The latest example: Jenna Jameson exchanged an unverified story and super sad, semi-nude pics for information about her former agent who Jameson said turned out to be a con man and is sabotaging her online presence. She was given the man’s phone number, address, social security number, credit score an more private information within the hour. Cool?

David Lynch fans will likely recall the last episode of Twin Peaks, where Laura Palmer tells Agent Cooper she’ll see him in 25 years. Peaks took place in 1989, which means she was referring to this year — 2014. Hence, Lynch is filming new episodes of the cult series, as evidenced by a Twin Peaks casting call.

It’s always exciting to see Cincinnati on the big screen — not just a mention, but actual shots of the city. It’s certainly not the most exotic locale, and many scenes of a Cincinnati-based movie could probably be replicated in a Hollywood studio. So movies that do make the trip Midwest tend to be very special to locals. Rain Man, Traffic and The Ides of March all brought a spotlight and stars to the Queen City. Next up: Cate Blanchett and Rooney Mara make their way to Cincinnati this spring to film Carol. Based on the Patricia Highsmith book also known as The Price of Salt, the movie will be set in 1950s New York City, but shot exclusively in Cincinnati. Blanchett and Mara in vintage garb, traipsing around town? Celeb-stalking will be in full force, #ClooneyWatch style. Read more here.

In case you missed it, Shia LaBoeuf has lost his damn mind. Exhibit A. Exhibit B. Exhibit C. But, due to my undying love of Louis Stevens, I still anticipate seeing his wiener (again) in Nymphomaniac.

We’re a week into 2014 but, judging by the proliferation of “best of” articles and continued obligatory year-end reflection posts on Facebook, it appears most people are still in #RIP2013 mode — so we’re going to follow suit. Now that our marathon New Year’s hangover has passed (and since awards season doesn’t kick off until this week's People’s Choice Awards and Golden Globes), let’s look back at some of the highlights — and low points — of 2013.

The most photographed location on Instagram was a Bangkok mall; the most “popular” is this shot of Will Smith and the Biebs, with more than 1.5 million likes.

A sacrifice to the Xenu gods? No such luck.

Moving on to Twitter, the most re-tweeted post was a somber one — Lea Michele of Glee’s photo of herself with boyfriend Cory Monteith, who died of a drug and alcohol overdose in July. 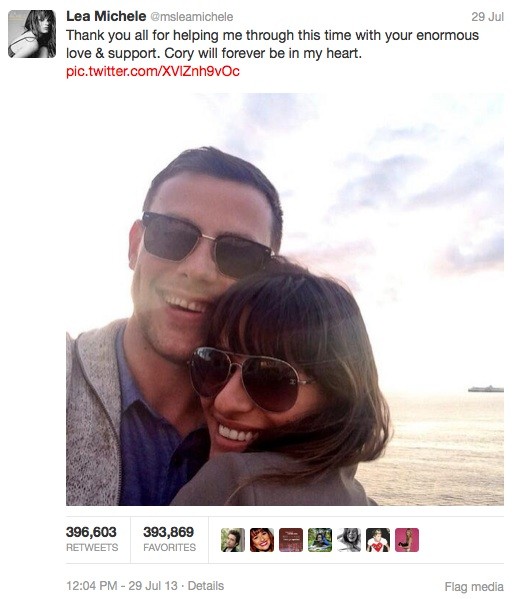 A close second was the announcement of actor Paul Walker’s death in November. :(:(:(

OK, enough with the sads! The most illegally downloaded artist of the year was Bruno Mars. Not sure whether that means he’s even more popular than his record sales show, or if people are just really ashamed to buy a Burno Mars album. Either way, the guy who penned, the exquisite phrase, “You and me baby making love like gorillas,” will be performing at halftime during next month’s Super Bowl. Good luck topping last year’s!

During awards shows and in end-of-the-year roundups, we often take a moment to remember people that have passed away. Since just looking at that Cory Monteith photo makes me want to sob and hide in a room full of Pug puppies and body pillows, actual real humans are out of the question. So, as a variation of this trend, let’s look back on some of the important TV characters we lost this year. SPOILERS.

After the main protagonist of Game of Thrones, Ned Stark, was shockingly beheaded in the first season, audiences quickly learned any character on the series could find themself chopping block at any time. But who (besides, of course, those who’ve read A Storm of Swords) would expect Ned’s widow and oldest son to join him so quickly — and in such a terrifying fashion? The episode “The Rains of Castamere” brought the merciless death of Catelyn and Robb Stark plus Robb’s wife, Talisa, their unborn baby and direwolf Grey Wind, in addition to at least a dozen others at the "Red Wedding" alone. Earlier in the season, Ros — one of my favorite “working ladies” on television — fell victim to the insufferable Joffrey. While she played a much smaller role than the Starks, her death was heartbreaking and shocking. You’ll all be missed!

A Prohibition gangster drama is bound to rack up a serious body count. For some of the historically-based characters, like Al Capone, viewers have a pretty good idea about how long they will last. The fictional characters, however, can meet their maker at any point. While I’m still not over Jimmy and Angela’s demise, Boardwalk fully crushed my heart by having Richard Harrow go out in a completely un-badass style. Harrow was more than just a talented sniper with half a prosthetic face. He was a hero in the show. He killed — a lot — but usually only the true bad guys, and often to protect others. He was sensitive and strong, but slipped in his final scenes, accidentally killing Chalky’s daughter instead of his target, Narcisse. As soon as he missed the shot, I knew he was done for — Harrow, by definition, always hits his mark! Sure enough, after a dream sequence in which Harrow reunited with his family, we were jolted back to reality to find the wounded war vet dying peacefully under the boardwalk. The show will go on, but won’t have the same heart without him.

Oh, Debra. I never much cared for Dexter’s little sis — the phony fowl mouth act just rubbed me the wrong way. But she definitely played an important role in the series, especially once she found out about her brother’s “dark passenger.” Dexter seriously declined after its fourth season, and this final one was a doozy. But it still didn’t prepare us for Deb’s death. After surviving a shot to the stomach, Deb appears to be recovering at a hospital. While Dexter was busy chasing down his sister’s shooter, Deb’s health turned for the worse, leaving her brain-dead. As a hurricane hits Miami, sending the hospital staff into a frenzy, Dex is able to pull the plug on his sister — sure she would not want to continue on in a vegetative state at a hospital for the rest of her days — and takes her body on his boat, to be whipped into the stormy sea. It seems like Deb and Dex died together in the water, until we meet up with a bearded, lumberjack Dexter in some mysterious woodsy locale, living in solitude. The fuh?

The Walking Dead killed off a number of significant characters between the end of Season Three and first half of Season Four this year. Andrea, who once shared a bed with the Governor, ended up dead because of him. The Gov. hunted and captured Andrea after she attempted to run away to her group at the prison. Trapped in a torture chamber with the ticking time-zomb™ that was Milton, Andrea was unable to protect herself from a deadly bite. Michonne made it to her BFF Andrea’s side, only in time to put her down before she turned. And, after making an anticipated return to the show, Merle also fell victim to the Governor. His brother, Daryl, was tasked with killing zombie-Merle in a super-sad scene.

The Governor’s path of terror finally came to an end at the prison, but not before he was able to take out Hershel (the closest thing the group had to a doctor, not to mention Maggie and Beth’s father and the sweetest one-legged man to make it in the apocalypse). The villain was finally taken down in a big shoot-out between his group and Rick’s, which left all the survivors in disarray. Also, baby Judith is MIA, probably in a zombie’s belly. :(

I made up my mind early on that Walter White needed to die at the end of Breaking Bad in order for the story to retain its authenticity. Walt got into the meth business in order to pay for his medical costs and provide ample support for his family if and when he succumbed to cancer. We all know he stuck with the game for so long because, as he finally admitted in the finale, he liked it. He was good at it. “I did it for me,” he tells Skyler in their final scene. Most fans probably expected Walt to die, and he did so in a truly epic fashion, while protecting Jesse. His brother-in-law Hank also went out like a champ, after a brutal desert showdown. The saddest death of all was the end of the show itself, but Breaking Bad will surely stand the test of time as one of the greatest American dramas.

Talk about a surprise ending! After breaking free from countless near-death experiences, Nicholas Brody was captured and killed. Viewers got a taste of a Brody-less Homeland this season, as the character was on the lam and not present in much of this season. But the show was so much better with Brody in it — somehow, he balanced Carrie’s cray, despite the fact that he was a damaged man who flipped every chance he got. This death gives the show an opportunity to take a completely new route. Hopefully we’ll still check in on his family (am I the only one who still cares about them?) but we’re definitely going to have a little bit of Brody in the form of his child with Carrie. How a fetus could survive the stress, cigs and booze she put it through proves that this is definitely a Marine baby.