I Just Can't Get Enough...Golden Globes

The Golden Globe Awards are a true Hollywood party. Awards are given out for television and film categories, so you get the playfulness of the Emmys and the movie stars of the Oscars without as much seriousness. And it is a widely-known fact that everybody gets their drank on throughout the ceremony. Globes were awarded Sunday night; here are some highlights.

Hosts Amy Poehler and Tina Fey served as ringleaders for this celebrity circus, supplying audiences at home and at the show with tons of laughs. Having a fine eye for detail (HA!), I appreciated that they swapped gown colors from last year’s show.

The duo threw hilarious digs at the nominees, calling Matt Damon a “garbage person” in reference to the caliber of A-listers and introducing the Wolf of Wall Street himself with, "And now, like a supermodel's vagina, let's all give a warm welcome to Leonardo DiCaprio!" There were also super funny cutaway shots, like Julia Louis-Dreyfus acting like she was too good for this mess, puffing on an e-cig and refusing to take a selfie with Reese Witherspoon. Flawless!

Jennifer Lawrence accepted the first Golden Globe of the night — wearing what appeared to be a bed sheet secured with seat belts — for her role as a certified Real Housewife of New Jersey in American Hustle. She displayed her usual candor, expressing true befuddlement and, for lack of a better word, cute “awkwardness.” And America’s love affair with her continues.

Jacqueline Bisset was shocked — or intoxicated? —when she was announced as Best Supporting Actress in a Series, Mini-Series or TV Movie for her role in Dancing on the Edge. Eventually she got her words together, speaking right over that "STFU" music and ended up defying the censor to get an s-word in that bitch. Go Jackie!

Behind the Candelabra nabbed Best TV Movie or Mini-Series, because the Hollywood Foreign Press Association doesn’t have a category for “Best Use of Bejeweled Thongs.”

Mad Men was SNUBBED! This year, but Peggy (aka Elizabeth Moss) got an award, at least, for Top of the Lake (Best Actress in a Mini-Series or TV Movie). And, seriously, she seems like a total sweetheart.

Best Original Score - Motion Picture went to Alexander Ebert for All is Lost. When the camera cut to this fancy hobo, I realized that’s the lead singer of Edward Sharpe and the Magnetic Zeros! Way to go, you crazy dude. Also: new hair icon.

One of the more surprising awards of the night was Best Supporting Actor in a Series, Mini-Series or TV Movie — that’s a wide-spanning category packed with talent. The Globe went to Jon Voight for Ray Donovan, in which his character advised his grandson, who was sick with a stomach ache, “Maybe you need to faht!” in a heavy Boston accent (Read: This was one of the season’s highlights). But Rob Lowe was fucking robbed of that award. I’ll never forget that face (even if I could)! 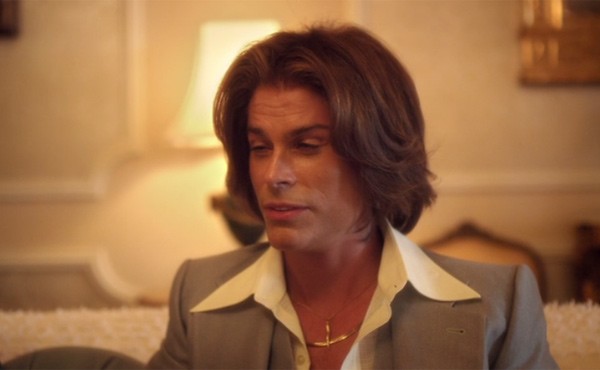 Amy Adams(' side boob) received the award for Best Actress In A Motion Picture, Musical or Comedy for American Hustle. She and her girls accepted the award in a neckline ripped from the film. Adams is well on her way to becoming a mega-star, but I still keep confusing her with Isla Fischer!

The Globes have this weird tradition of selecting a Mr. and Ms. Golden Globe each year, which is basically a celebri-spawn that wears expensive clothes to help usher award winners out the correct stage exit. This year’s Miss was Kevin Bacon and Kyra Sedgwick’s daughter, Sosie Bacon. As for the Mister, Tina introduced her little-known adult son from a previous relationship.

Robin Wright, female perfection incarnate, was awarded for her role on Netflix series, House of Cards (Best Actress in a TV Series, Drama) The princess attended the show with new fiancé, Ben Foster. Get it girl!

Presenter Jim Carrey proved he’s still got it (despite several bouts of public cray over the past couple years)! I don’t know what made me laugh more: his Shia LaBoeuf sting or the face that he was announced as the star of Dumb and Dumber To.

Best Supporting Actor in a Motion Picture went to Jared Leto, who portrayed a transgender AIDS patient in Dallas Buyers Club. He was really workin’ them ombré highlights (not in the movie, he actually has female envy-worthy hair for a guy). And despite making a period joke, I will always love him because he will always be Jordan Catalano to me.

Another award presenter fashion faux pas: Zoe Saldana's dress looks like a prom rag from Charlotte Russe circa 1999. She'd look hawt in a burlap sack, so her style cred will recover, but damn. I think I have an old purse from Claire's that would match.

Next up was Michael Douglas (Best Actor in a Mini-Series or TV Movie) for his role as Liberace in Behind the Candelabra.

Host Amy Poehler received her first Golden Globe for Best Actress in a TV Series, Musical or Comedy as Leslie Knope in Parks and Recreation. She was massaged by/made out with Bono upon the exciting announcement.

Leonardo DiCaprio won his third Globe (Best Actor in a Motion Picture, Musical or Comedy) for The Wolf of Wall Street. The actor, often overlooked at awards events (always the bridesmaid, never the bride, that Leo), seemed extremely gracious.

Rounding out the night, American Hustle was named Best Motion Picture, Musical or Comedy; Cate Blanchett (which is pronounced Blanch-it as I recently learned on NPR) nabbed Best Actress in a Motion Picture, Drama for Blue Jasmine; Her male counterpart: Matthew McConaughey (Best Actor in a Motion Picture, Drama), for Dallas Buyers Club — a role for which he lost 45 pounds. Or, as Tina Fey put it, “what actresses call 'being in a movie.'" Matt wore a cool deep emerald velvet tux and gave his signature catchphrase: “Alright, alright, alright!”

The show closed with Best Motion Picture, Drama, which went to 12 Years a Slave. All in all, it was an entertaining night and the awards were pretty well-distributed. Next up is the Oscars with Ellen DeGeneres — only 46 days to go!